Among the motifs present in the Return was the constant image of the red balloons throughout the Las Vegas scenes: in the home of the Drugged-Out Mother and her Son, in the Jones’ house after Sonny Jim’s birthday, and once more attached to the sculpture outside of Lucky Seven Insurance. The first two times we see the balloons, they are in direct correlation to a child, setting up the significance of them. But when they appeared outside Dougie’s place of work, everyone started to wonder what on earth was with the balloons. I hadn’t really thought about it at the time, but quite randomly this week I recalled an old wall decoration that had hung in my childhood bedroom. I went looking and found it in my basement. It is made of wood, painted prettily and carved in the shape of a balloon, with a ribbon for a tail. On it is a poem:

Excerpt from Children Are Like Balloons By Dan Gauthier

“Children are like balloons with a message inside. They start out small and we inflate them with something of ourselves. As we pour our lives into them,

brighten the days and

cheer up the sick.

They remind us of being young and that life is fragile. They celebrate living.”

Dougie!Cooper was childlike.1 Kyle MacLachlan himself has said it in a number of interviews since the finale, and has talked a lot about how Dale had to relearn how to be a person, relearn what it meant to be human. In some ways, it has been argued, trapped 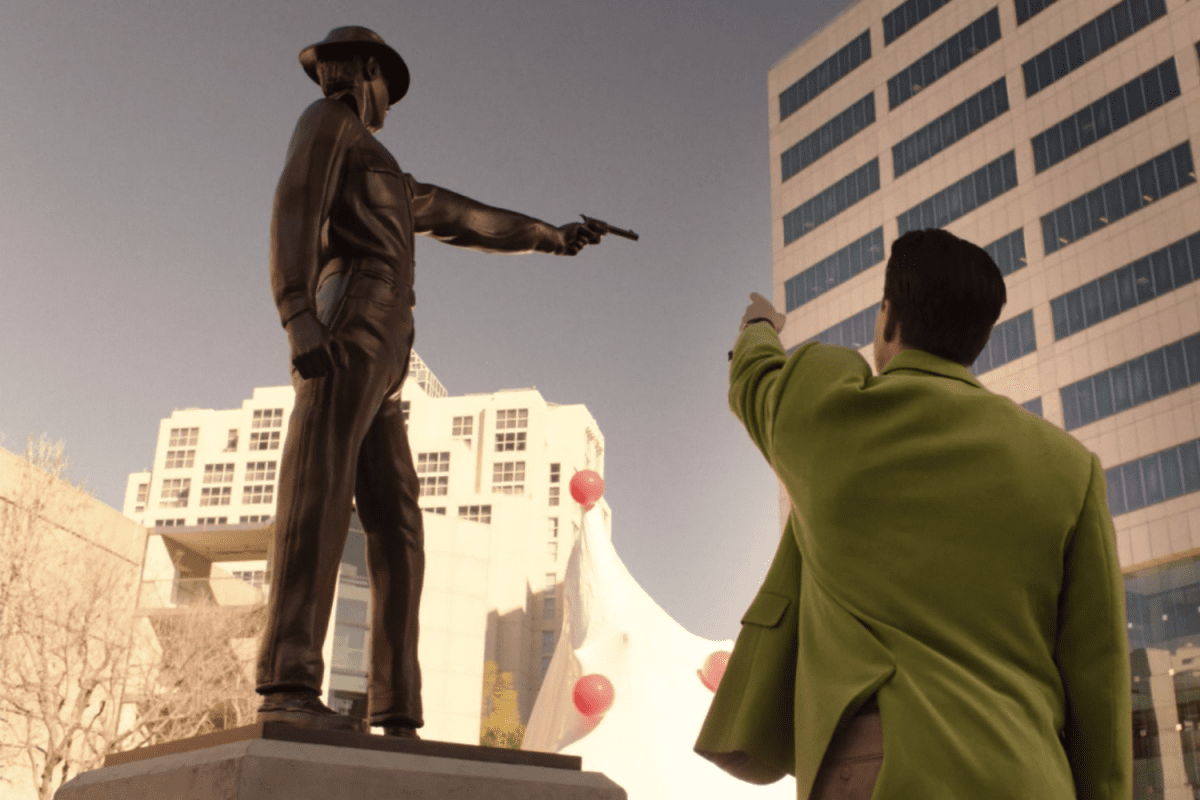 as Dougie, Dale was better able, even more prepared, to fight against evil. Simply through existing, with his logic centers in semi-permanent blue screen, Dougie’s childlike innocence allows him to spread sunshine, give joy and brighten the days of all around him as they, in turn, gave of themselves for him in the form of their time, compassion, friendship, love and loyalty. Cooper’s interactions with those around him, despite (or because of) his lack of direct communication with them, greatly enhance their lives in a multitude of ways, and they piece him back together in return.

Dougie!Cooper is the balloon of the Return. Even though I laugh as I write it, I know it to be true. He certainly carried a message, and the people who came into contact with him each took that message and interpreted what they needed from it. Step by step, interaction by interaction, the fragmented psyche of Dougie!Cooper grew. Janey-E, Sonny Jim and all the others did indeed fill his heart.

Primarily in literature, balloons are used to symbolize innocence, childhood and freedom. Dale’s innocence in his Dougie persona is a given, as is his childlike nature, but it is the quality of freedom which I think is the most important, if not necessarily the most obvious. As Dougie, Dale is free of his obligations towards Twin Peaks, towards the Bureau. His feelings of responsibility regarding his Doppelganger’s actions are lifted, at least temporarily. Perhaps most importantly, he is free of his logic, of his natural inclination to look for explanations or to engage on a ponderous level with any of the metaphysical happenings surrounding him. He is pure – act, react, intuit. In his debilitated mental state, which could be considered limiting physically, he is freer than he ever was before mentally. It’s been suggested in previous articles that this is a form of enlightenment, and I would argue that it’s true. 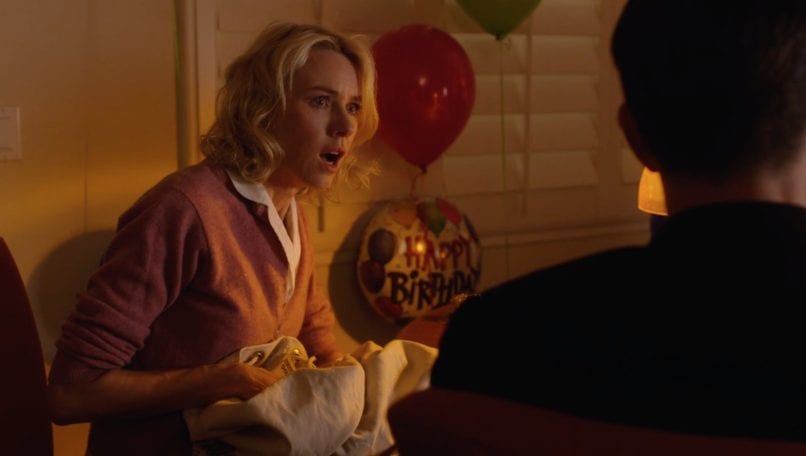 In dream interpretation, the balloon can have widely varied meaning depending on whether the balloon is free floating or tied down. A free floating balloon, one that is drifting away, could mean the loss of a dream, or loss of hope. However, all the balloons in The Return are anchored or weighted down – symbolic of the achievement of happiness, and definitely indicative of Dale’s state as Dougie.

There is a bittersweet taint to loving something the ephemeral nature of which is already a foregone conclusion. To love it and enjoy it despite its impending end is in the very nature of humanity. Our very lives follow this same cycle as the balloon. We, as children, are given the life, the vitality, the passion and interests which inflate our desire to learn, to grow, to explore, and before we know it we’ve lost hold of the tail and have to chase it down, and guide it along its way so that it doesn’t merely drift through the world, as Janey-E and others do for Dale in his Dougie persona, steering him around the great wide world that he couldn’t begin to navigate by himself. But these people never get the chance to set Dale free for themselves, to let go of the tether and allow him to float to new places – While the balloon is in general a positive omen, there is a downside regardless. Eventually, all balloons pop, deflate or float away. The very nature of a balloon suggests impermanence and fragility. Press too hard and it’s thin walls will burst. Dale, reminded of his role in life, of the responsibilities which he must finally own up to, pops the balloon himself in the act of electrocuting himself. Gauthier’s poem ends with the beautiful image of the parents letting go to the balloon, sending their child sailing into brighter futures. Not so for the denizens of Las Vegas to whom Dale has come to mean so much, as they gradually discover that the balloon is leaking air, and they can’t reach out fast enough to hold it one last time before it pops for good. Dale isn’t Dougie. He’s always been a poor liar and even if he weren’t, some things just can’t be replicated. You don’t give a kid a red beach ball and tell him that it’s his party balloon. 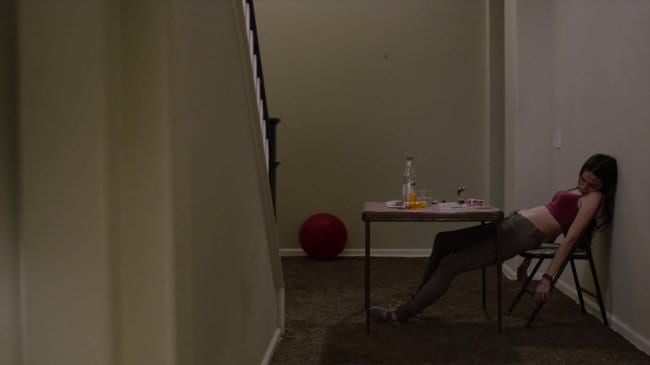 The balloon metaphor paints a pretty picture of what everyone hopes for their loved ones in life, but if any lesson has been learned from The Return, it’s that real life can be put off, but it won’t go away and can’t be ignored forever. Cooper is the ever-optimist for whom the ugliness of reality is finally starting to catch up (even if he attempts to circumvent it one last time in his attempt to save Laura).

There is a quote that I particularly like from an interview with author Karl Hess, where he talks about freedom and it’s connotations. “[…]We all have the freedom of a balloon floating in a pin factory,” he said. Dale hasn’t earned his freedom, or his happiness, but those who gained it by proxy certainly have. Instead, as he leaves for Twin Peaks, he has blown up a different sort of balloon, full of hopes if not happiness, and Dale’s headed straight for the pin factory.  Any freedom he ever had in the matter was an illusion. He can check in, but he can’t check out. 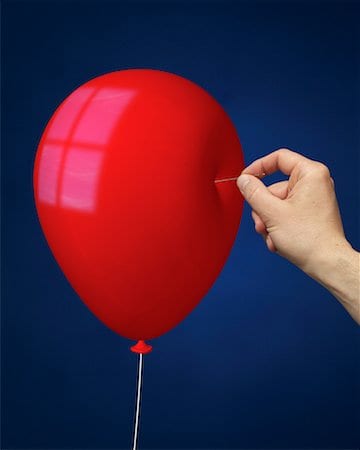 1. There is a French short film called The Red Balloon about a little boy who finds a sentient, mute, red balloon. It’s uncanny. 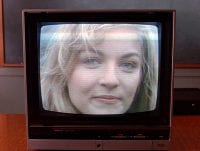