Way back in the year 2000, I rented The Elephant Man from the local video store. Just to remind you of how long ago this truly was, video stores still existed and they rented out VIDEOTAPES. How anyone thought that videotape was a viable format is beyond me. Anyway, some unfortunate circumstances led me to never watch the movie before I had to return it to the store. Of course I could have just rented the movie again for like two dollars or whatever they charged back then, but I mentally associated The Elephant Man with the ‘unfortunate circumstances’ that prevented me from viewing it in the first place. As the years went by, I never attempted to see the movie, despite being a huge David Lynch fan and watching all of his other movies countless times (I even somehow sat through ‘Dune’ twice!). Fast forward to October 2017 and here I am, finally sitting down with the elusive Elephant Man. Since I was not struck down by lightning during my private screening, I’m gonna give you my impressions of the film. Here we go!

First off, during the opening credits I was struck by the fact that I was going to be watching a movie with BIG, IMPORTANT ACTORS in it. Anthony Hopkins! John Hurt! Anne Bancroft! John Gielgud! This was going to be a far cry from the trashy B-movies I normally watch. But Anthony Hopkins in a David Lynch film? And where’s Jack Nance and Johanna Ray and Mary Sweeney? There were a bunch of strange names in the credits and it weirded me out. Angelo’s not doing the music? Ok, I knew this was going to be a different kind of Lynch film going in but it wasn’t until the credit sequence that it really hit home. Fortunately my uneasiness was put to rest during the opening scene when a woman is trampled by a pack of elephants (let us note that this may have been the first time in the history of the world that someone’s uneasiness was put to rest by seeing a woman get trampled by elephants). Lynch’s signature directing style was dripping all over this first scene. It was actually kind of frightening but it was over before I knew it and then the real story began. 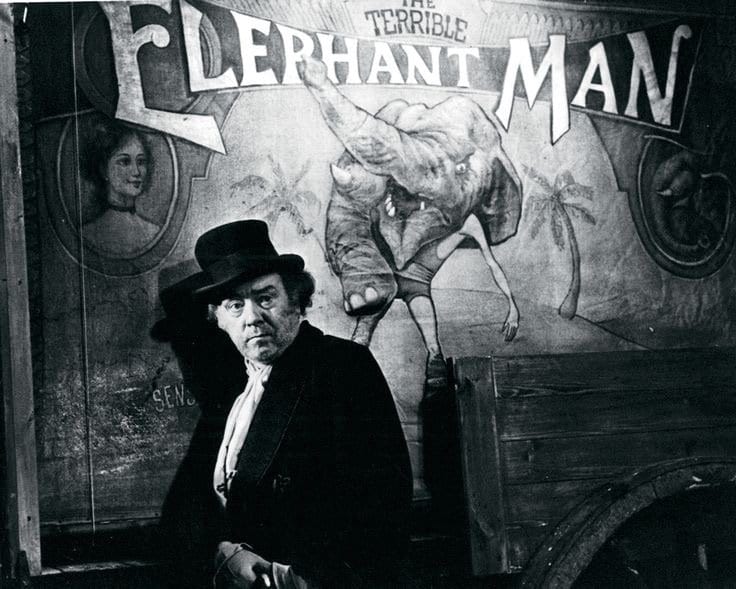 Here’s the condensed version of the plot: John Merrick has a hideous deformity and is being put on display in a traveling freakshow. Anthony Hopkins (Dr. Treves) takes him back to a London hospital to examine him and John ends up staying there indefinitely, even though the doctor can’t cure his deformity or help him in any way. This upsets a lot of people until the Queen of England (somehow not Queen Elizabeth even though it seems as if she has been alive forever) steps in to grant John permanent residence at the hospital. The doctor discovers that John is an intelligent, gentle soul and introduces him to prominent society members. One night, the dude who runs the freakshow kidnaps John and takes him overseas and back to being put on display. John escapes (with the help of a really awesome group of fellow freaks) and returns to England, where the doctor finds him again and takes him out for a lovely night at the theater. Then after experiencing the most glorious night of his life, John lays down on his bed and dies. 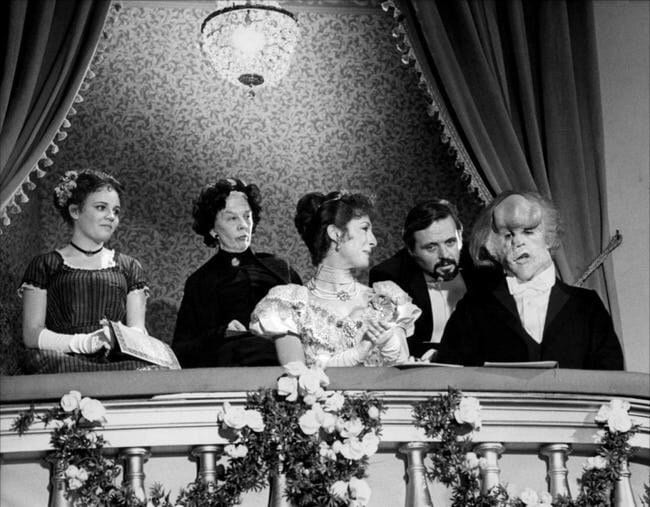 I actually really enjoyed this movie despite thinking that I was not going to like it at all. I am not one for historical dramas. They usually bore me to tears. Maybe it was Lynch’s brilliant direction, but something kept my eyes glued to the screen the whole time. The story itself was captivating, even more so because I knew it was based on real events. Early on in the film, I had a morbid fascination with the Merrick character. I wanted to see what he looked like and how he behaved around others. As the movie progressed, I sort of fell in love with the character and had the deepest sympathy for his unfortunate situation. I was just plain rooting for him to succeed in life. During the scene where the ruffians break into his hospital room and pour beer on him and taunt him, I could barely look at the screen. I had invested so much in John Merrick that I couldn’t bear to see him degraded like that. Being aware of the real-life events that the film was based on, I knew the movie wouldn’t end with John Merrick marrying the Princess of Wales and living happily ever after. But the ending was maybe the most elegiac and beautiful of all of Lynch’s filmography, and ultimately uplifting considering everything that had come before it.

While I enjoyed the film, I can’t say I will be in a rush to rewatch it. The story is a sad one and the mood throughout the movie can best be described as haunting melancholy. I try to veer away from ‘haunting melancholy’ in my life. Lynch showed unbelievable restraint in this film, especially knowing that he had just come off directing the insane Eraserhead. At times, I even forgot I was watching a David Lynch movie. His signature touches were there though, especially in the three surreal dream sequences in the film (two bookending the story and one in the middle), the theater scene at the end, and any shots of smoke and machinery (some of Lynch’s favorite imagery). I would place this near the bottom of my list of favorite Lynch films, even though it was a great movie. I prefer the batshit crazy, mindfucking version of Lynch, and this was just a fairly normal biographical tale.

— I wish it was still commonplace in society to totally bitch someone out and then say ‘Good day’ before you storm off.

— Some of the scenes seemed to fade to black too soon. A character would be saying their line as the screen started to darken and we would be abruptly ushered into the next scene. At first this annoyed me, then I sort of liked how it kept the film moving along at a brisk pace with none of those ponderous, lingering shots that directors like to hold at the end of a sequence.

— Did these high society folk really like Merrick or were they just pitying him? I couldn’t help but wonder if the freakshow owner was right and Merrick was just on display for the upper class while he resided at the hospital.

— I want to see an entire movie about the freakshow people as they escape and journey to freedom. There were midgets, Siamese twins, some transgender tall dude, and a wolf man. A FREAKING WOLF MAN. They all looked out for each other and overcame the odds and I wanted to see so much more. I dream of an entire cinematic universe, much like Marvel, where these odd people each get their own movies and a few films together, culminating in them saving the world.

— John Merrick was assaulted by people on the streets of London after they thought he attacked a young girl. They saw his grisly appearance and tattered clothing and just assumed he was some horrible monster. Those same type of people applauded him at the theater. I feel like the public’s perception of a person or a thing is mainly dependent on how it is presented to them. This is a sad realization for me. Put on a tuxedo and have a famous actress friend and you’re the toast of the town. Wear a dirty cape and a sack on your head and you’re a perverted derelict. It makes me wonder about how I have been viewed by others at different junctures in my life. And it makes me thankful for the true friends I have who don’t care about any of that window dressing and appreciate me for who I really am inside.

Now that I’ve seen every David Lynch movie and short film, I feel like I’ve closed the chapter on a book I opened back over 20 years ago when I saw Twin Peaks for the first time. Unless David decides to make another movie, but I’m not holding my breath on that one. Thanks for reading my thoughts on this film and just remember, ‘I’m not an elephant, I’m a human being!’