On August 17th, 2017, I watched Blue Velvet for the first time. This review has been sitting around, waiting for the Return to finish before being posted, and so the thoughts contained therein, I assure you are the thoughts I wrote down the very next day, and not over a month later. I have since also viewed Eraserhead and all of Wild at Heart.

I’ve had Blue Velvet sitting in my watchlist on Hulu for nearly two months and it just never felt like quite the right time to watch it until now. Of the many David Lynch films out there, I have seen Fire Walk With Me, Dune, a brief selection from Wild at Heart and, now Blue Velvet.

My first thought, upon beginning the movie, was how happy I was that Lynch that ran the credits first. Sometimes, that’s all it takes to make me happy. I grew up in a family that watched a lot of films made in the forties and fifties, musicals, staged shows and even those synchronized swimming movies with Esther Williams – can you imagine a David Lynch staged synchronized swim performance?! Such was my childhood and all of these movies feature that trait. Having the credits run first really puts me in a mood, the right mood especially, for a Lynch film like the one that Blue Velvet turned out to be. 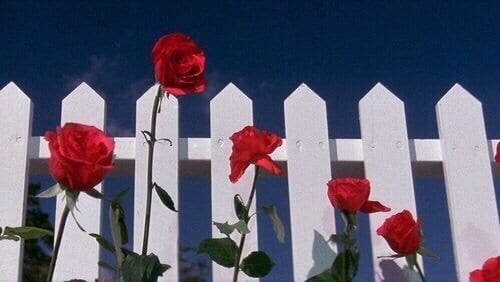 The music, the shots of the red flowers against the white fence and the blue sky. How striking! It mires Blue Velvet in an absolutely fifties sensibility in keeping with the opening credits. Even the way that characters move belays that stylistic trend. Sandy walks like, well…Sandy. From Grease. I don’t think that was on accident. She holds her books just so, and even though she isn’t wearing a poodle skirt, the viewer half believes she is. Despite the content, or perhaps because of it, the characters – even Jeffery – retain such an innocence of person which is again very fitting to that time-theme. An innocuous, seemingly strange moment where he does the chicken walk defines him as still little more than a young person, untested by the harshness of the world. That, of course, changes by the end, but it’s something that many eighties movies do not contain, despite the commonality of a ‘coming of age’ film.

I, like most, love a good eighties teen comedy flick. They are replete with hardened badasses, wise crackers, and drugged up, hard drinking think-they-know-it-alls. This is not that eighties movie. The hair is eighties, the clothes are eighties, the cars are eighties, but the characters are not. There’s a challenging depth to the world that Jeffrey uncovers, piece by piece, a depth that the typical eighties flick glosses over. The eighties reigns in the realm of comedy, but deep seated emotional transfigurations of self are largely absent.

The other initial impression I got from the opening credits, right away, was that this is a neo-noir in every sensibility. Fresh off a first time viewing of Laura with our very own 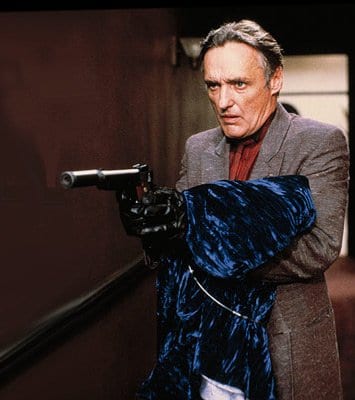 Lindsay, I was seeing parallels everywhere. Badalamenti’s score alone goes a long way to instigating that notion, as does the consistent repetition of the song Blue Velvet throughout the film, just like the song Laura appears everywhere in Laura – the orchestra plays it at a restaurant, and it even comes on the radio in one scene – thus, hearing Blue Velvet  every ten minutes or so is consistent with that.

Additionally, the main plot reads as a straight noir, and the inclusion of two love interests – the damsel in distress/femme fatal and the good girl – frame the same way as any noir on the list. Point and shoot and I bet it will contain the same tropes. It’s almost as if it’s a noir of Jeffrey’s own creation –  maybe he saw one too many with his Mother and Aunt, which is another of Lynch’s proclivities – the metatextual nature of watching something inside something, though usually with less obviousness or specificity. The Return does this with Sam and the Box in the first several parts. Jeffrey’s family, by contrast, actually watch a noir, inside a noir. Noirception, and more specifically filmception.

I had many other thoughts while watching this film, most of them being that Kyle MacLachan looked far too young to be a college student, which is no fun for me as a high school teacher, and that Laura Dern looked about five years older than him (She is also an excellent performer. She does the Lynch ugly cry just as well in the 80’s as she does now) . Such is life, I suppose, but Kyle’s performance is absolutely stunning. He has me one hundred percent convinced that he’s anguished over the entire situation, but especially the fact that he hit Dorothy. When he sits on the bed, sobbing as he recalls what happened, I don’t think I’ve ever believed a performance more than in that moment. That is what the destruction of innocence looks like. This is what it looks like to be thrown pitilessly from a sheltered life.  He really is one of the most underrated actors of our time.

We’ve talked about the forties, and the fifties and the eighties, but now, it’s time to talk about the seventies. When Frank takes Dorothy and Jeffrey on a ‘ride’ and they go to the location where Dorothy’s son was being held, I almost felt as though we’d fallen into a Coen brother’s film, except instead of recreating the seventies, it was as if it were being filmed in the seventies. Did Lynch ever really leave them behind? I couldn’t say for sure, but of all things in this movie, that moment was the most surreal to me. Strange, I suppose, considering the plethora of other surreal moments.

But let me talk on that point, for a moment. Blue Velvet is quite conventional as far as Lynch films go. There is, of course, the required discussion of dreams and a brief dream sequence but those dreams are just that – dreams and nothing more. They mean something, but they are not akin to the dreams of Dale Cooper. It’s a tame, conventional film by his standards, and I’m okay with that. It doesn’t have to be crazy insane for it to be Lynchian. The Straight Story teaches us that, if nothing else. As I understand it, some people believe that, at the end of the movie when Jeffrey is lying on the chaise lounge outside, he’s just woken from a dream, and that dream was the movie. I, for one, doubt that, but it doesn’t invalidate the concept.

But despite not being crazy, or hard to understand, it still does what I believe Lynch sets out to do most of the time he makes a film – put us off our guard, makes us question ourselves, delve into a place where we can find our own understanding. What would I do if I found an ear? How would I react in Jeffrey’s situation? Additionally, how do I react to how Jeffrey reacts? Even smaller things, just there to unsettle, remain a thread throughout his work – the close up on the bugs, crawling under the ground in full surround sound bothered me immensely. (Nature as an antagonistic force, even though they aren’t actually harming is a fantastic concept, and very in line with Kafka!) The nature of Jeffrey’s father’s accident. Gangsters who get high on helium. It’s a half serious, half pastiche (which can still be serious of course) take on noir through the eyes of a young man who, despite living in the 1980’s, probably grew up much like I did, if his Mother and Aunt are anything to go by. 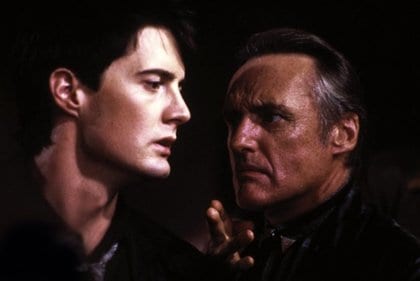 I loved this movie a lot. It wasn’t life altering, but it was moving and had a heart and soul to it that is lost in most movies today. I didn’t feel fulfilled by the happy ending, which I can’t help but wonder might have been on purpose. Blue Velvet watched like a good novel reads, and, as a teacher of English, it is that, more than anything, that endears the film to me.