Welcome to the final Round of The Featured Music of the Return. For Parts 1 and 2, click the links.

“American Woman” by the Muddy Magnolia’s shows up earlier on in Part 16 during the scene when Diane receives the text. It serves to connect DoppelCooper and Diane even further. In the first article, I talked a lot about the feminism of this song, and I think it still really fits with Diane, but, as Twin Peaks is wont to do, turns the insinuations on their head. Diane, who is extremely independent and standoffish (for very legitimate reasons) is being physically, mentally and emotionally abused by Doppelcooper.

The version presented is, as before, the David Lynch remix which features the drastic slowing of tempo, distorted sections, and even backwards sections. In a metaphorical way, Diane’s power as both an individual and as a women has been stagnated, distorted and reversed. She is a perverted image of feminism held under the abusive sway of the Doppelganger. 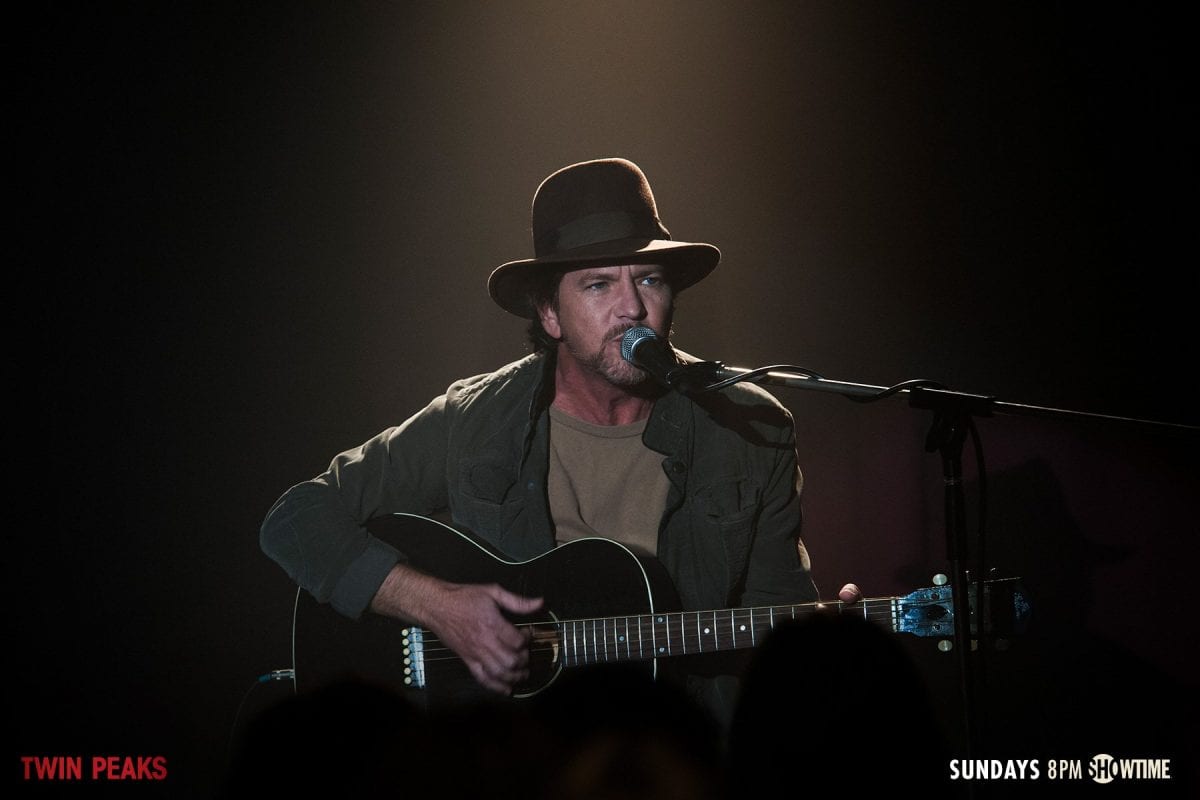 Eddie Vedder’s “Out of Sand” is mostly too depressing to listen to. It speaks not only of Cooper or of Twin Peaks, but to the audience in general in my article “You Can’t Go Home Again” I talked a bit about the significance of the performance, with particular regard for the lyrics, which were most assuredly the reason the song was chosen.

And I am who I am

Who I was I will never be again

Running out of sand

I stare at my reflection to the bone

Blurred eyes look back at me

Full of blame and sympathy

And I am who I am

Who I was I’ll never have the chance

It’s about not taking chances, about how different we can end up from where we hoped, about not recognizing who we have become. It’s the pain of stagnation, or unfulfillment, and it speaks to each character and each person differently.

There’s another us around somewhere with much better lives

This line glows like a beacon if there ever was one for the future of the series and for the attempts that Cooper will make to ‘fix’ things. But, as I suggested before. Perhaps things were never really ‘broken’ in the first place. 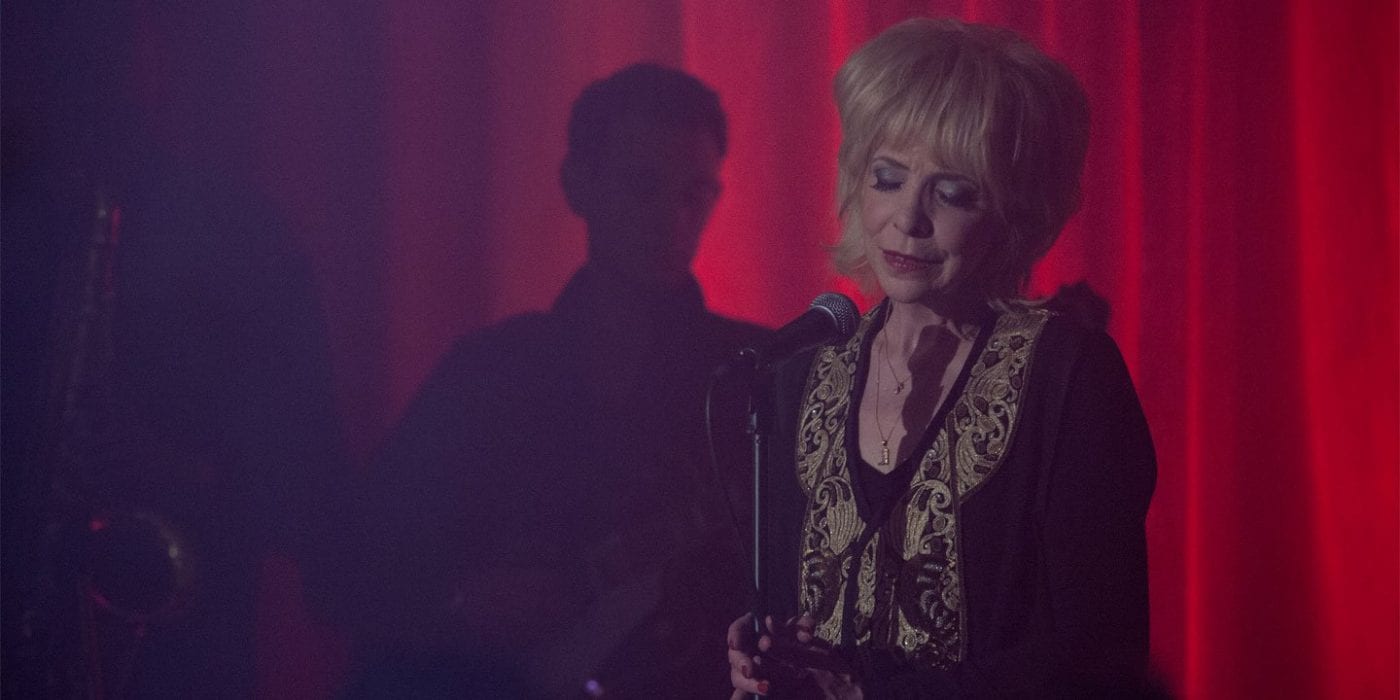 “The World Spins” which appeared in the second season of Twin Peaks makes its return appearance in Part 17 with Julee Cruise once again gracing the Roadhouse stage. Initially I found it an odd choice, but less so now than before. In season 2 the song plays when Dale is at the Roadhouse in season 2 and the Giant appears, telling him the infamous line “It is happening again.”

Moving near the edge at night

Dust is dancing in the space

A dog and bird are far away

The sun comes up and down each day

Light and shadow change the walls

The things I touch are made of stone

Falling through this night alone

A fairly straightforward composition, the song discusses the transient nature of all things, both physical and metaphysical.

Come back this way

Come back and stay

Considering the scenes after which this plays in Part 17, the nature of “Love, don’t go away,” is once more regarding Laura Palmer. It’s focused on the desire to retain something which is by nature transient. Who is speaking doesn’t really matter. James, Cooper, all of Twin Peaks. Laura was their sweetheart and her loss destroyed the whole town.

This final line deserves its own discussion for a variety of reasons. It’s literal – life goes on always. It’s metaphorical – Love certainly does make a person’s world spin. And in the Return, it’s something more, for Cooper is certainly spinning the Twin Peaks globe and nothing is going to be the same.

I didn’t have a whole lot to say about “My Prayer” by The Platters when it first appeared in Part 8, but, by Part 18 it might be perhaps the single most important song of the season. “My Prayer” plays again during the profoundly unsettling sex scene between Dale Cooper and what is probably a Red Headed Diane. There’s been a lot of discussion about sex magic happening in this scene, a la Crowley level occultism, and I would have to say it’s probably true. It’s almost a sacrilegious song to have playing during a sex scene, until you start to think about it.

When the twilight is gone and no songbirds are singing

When the twilight is gone you come into my heart

And here in my heart you will stay while I pray

My prayer is to linger with you

My prayer is a rapture in blue

With the world far away and your lips close to mine

Tonight while our hearts are aglow

Oh tell me the words that I’m longing to know

My prayer and the answer you give

The song itself isn’t bound to a religious notion. Prayer here is definitely tied rather to love in both the physical and emotional senses. I’ll suggest in a bit that there’s another, additional layer to this considering the scene during which it first appears. But first, let’s talk about sex magick. A prayer is magic of a sort, depending on how you look at it. We generally associate prayer with religious, usually Christian, properties, but it isn’t bound to that in this song. In this piece, the religion, as it were, is the person to whom the singer is speaking. It is the worship of that person. The singer wishes to remain with the person, to kiss the person, to have the person’s love and, above all, it is heavily implied, to marry the person.

This literal meaning contrasts heavily with the visuals presented in Part 18. The interaction between Dale and Diane during this scene is, quite frankly, the most disturbing yet. Dale speaks and acts much like DoppelCooper, ordering her to “Turn out the light” and “Come here”. The sex which ensues is the direct opposite of worshipful. It’s as if they are as separate as possible despite intercourse, drawing farther and farther apart, with Diane going so far as to place her hands to block out Dale’s face. Whatever Diane this is, it’s clear that all of them are still a piece of the original, and thus experienced the rape. And in the morning, Diane is gone. All this work opposite the ‘prayer’ in the song. Diane doesn’t “linger” with Dale, they don’t kiss during sex, and no one looked particularly aglow. It’s a masterfully composed scene to be sure and continues the theme of Lynch making the 50’s “supercreepy”. So what magic is occurring here? Well, in the morning they’re totally different people, in a completely different location. I’d call that some sort of magic.

The second angle is by far the more disturbing. Considering what we now know from The Final Dossier, I’d like to think about this as, not a love song between the boy and girl in Part 8, but the natural magnetism of the inhabiting spirits to their inhabitants, and possibly between Jiao Dai and BOB.

When the twilight is gone and no songbirds are singing

When the twilight is gone you come into my heart

And here in my heart you will stay 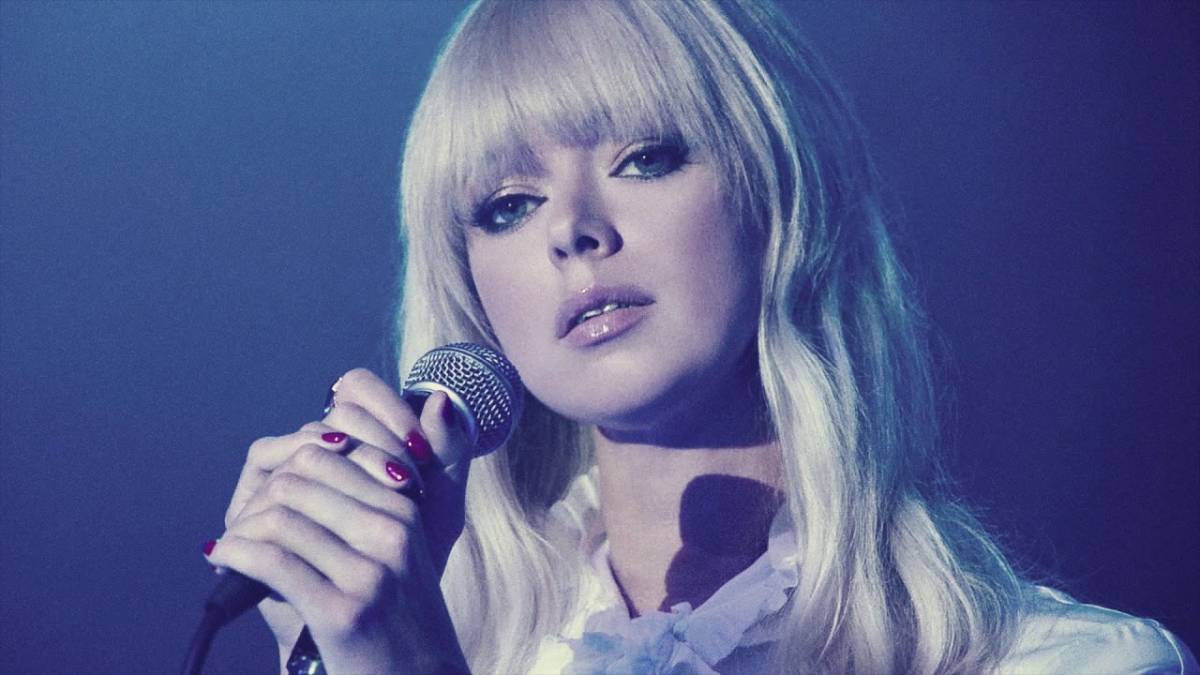 Lastly, I’d like to come back to the song which ended Part One, “Shadow” by the Chromatics. There’s a far deeper meaning in this song than any of us could have realized when we first heard it. It’s full potential as a facet to understanding the journey of The Return couldn’t be realized until watching Part 18. I wasn’t the first to realize this, and I wasn’t the last. It came to people gradually that this song was chosen in relation to Dale and Laura.

Shadow, take me down

Shadow, take me down with you

You’re in the water

I’m standing on the shore

Still thinking that I hear your voice

Can you hear me?

Seasons One and Two – Laura, floating in the water, dead, or floating in the ether, living in the spirit world and Dale’s dreams; Dale on the shore, solid, tied to life still, looking into that abyss, clinging to the memory of a dream where Laura spoke to him.

At night I’m driving in your car

Pretending that we’ll leave this town

I took your picture from the frame

Richard (Dale) and Carrie (Laura) driving from Odessa to Twin Peaks. That sequence takes up a good fifteen minutes of more of the final part. It aggravated most viewers to no end. I like the suggestion here, the “Pretending” that’s going on. No one checks out of Hotel Twin Peaks. Is Odessa even real? Who is Richard? Who is Dale? Is Laura little more than a dream? She is most certainly the picture in the frame. It’s how we most commonly see her, the Prom Queen trapped forever behind shattered glass, glazed eyes and pristine smile frozen in time, preserved. Carrie Page is certainly not what she seemed.

What should this tell us about the third season then? I think I was right when saying that the songs were not always chosen for particular parts, but rather to fit with the whole. It’s a ‘film’ of a sort after all. And the order in which we watch the parts might not be the only way, or the best way. But it is the way that Lynch and Frost chose to present it. We start with the end, and end with the beginning. We come full circle. The first and last images are of Laura whispering in Dale’s ear, of Laura saying she’d seem him again in twenty five years. How particularly poignant that the first song herald that end. Is there an end there? Or even a beginning? To me, this season works as an Ouroboros. There is no beginning or end. There is only the cycle. Dale, looking for Laura, and not finding what he expected.

For the last time…

An echoing refrain that calls out over and over, despite the statement it makes.

I knew from the beginning that music was going to be one of the key indicators of what was happening, of how we viewers were supposed to understand and interpret what was going. A key, if you will, on the map of our journey. The music has indeed proven so to be. What the music means to me, might not be the same as it is to you. What I have presented to you here is but one vision, and perhaps it can inspire further thought as to the variety of intentions which could have merited each song’s inclusion, whether to set the mood, to add another level of context, or to provide hints throughout. 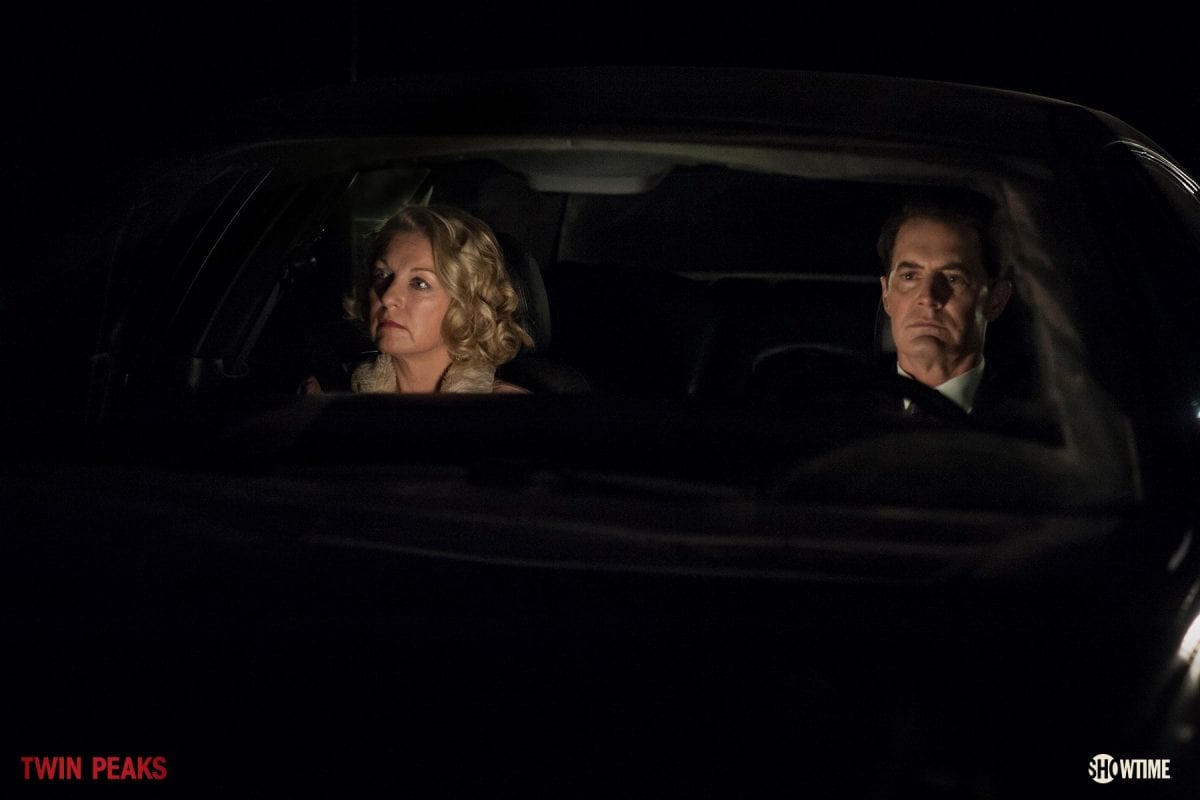