I recently had to opportunity to reach out to a performer for the Damn Fine Music Festival that occurred in Dallas, Texas in Deep Ellum. The Damn Fine Music Festival was directly inspired by Mark Frost and David Lynch’s Twin Peaks and was formed as an homage. Sarah Ruth Alexander is a musician who performs throughout the areas of Dallas, Forth Worth, Denton, and Austin TX. She has toured widely with her band They Say the Wind Made Them Crazy. The Damn Fine Music Festival occurred Friday January 12th and was coordinated by Jeff Brown of King Camel Productions. He compiled the bands from a chosen list of musicians in a style similar to Denton’s Rock Lottery, an event where selected musicians are picked at random in the morning of a chosen day and expected to perform a twenty-five minute set that evening and voted on by the audience.  The list of bands can be found here: https://www.centraltrack.com/twin-peaks-damn-fine-music-fest/.

SR: It was really good; it was … I’m not sure if it sold out, but it was really crowded, and there were a lot of people. I mean, I’ve been to a lot of shows, played a lot of shows, where I saw people that I had not seen before, but the band I played in … I was with people that I didn’t know. A lot of us were … I talked to different people, and it was just very almost purposefully like “I’m going to put these people together, that you may not know these people  … but the musicianship was … it was great, … every set was musically sound. Yeah, and people could get really serious with imagery, too, as well.

RK: Yeah, and I heard that a lot of it was like that. Did you see any cosplay? Were attendants dressing up like this? What was that like?

SR: There were people in the audience, like attendees, that were dressed up as characters as well, yeah, which was funny because I didn’t know everybody that was playing. So, I didn’t know if they were playing with the band or not, you know?

RK: Was the whole decoration like that, of the room? Was it decorated like that for just the band or as an overnight venue theme?

SR: Well, there is already a red curtain at the venue, so that worked out, and Jeffrey Brown, who organized it, the promoter, he put out all these donuts, like a ton of donuts, displayed just like in the show. So, that was something that happened as well. Otherwise, it was people in video, there were video artists for every band, too. So it was like people dressed up, donuts, video.

Pictures of the night are available here from Central Track: https://www.centraltrack.com/damn-fine-photos-damn-fine-music-fest/

RK: And the video artists, did they come to the practices or communicate with the band, or were they just doing that behind the scenes while you were getting your sets ready?

SR: I know that our video artist came to one of our practices and talked and kind of had like, because we were Laura Palmer and so, at the end of our set we had a plan to, we were going to scream at the very, very end and then put an image of Laura screaming, and then the Killer BOB Band was coming right after us so, they came and like killed us, choked us. Yeah. It was fun.

RK: This is a fairly unique gathering of musicians, to be compiled in a fashion similar to that of the Rock Lottery. Perhaps some members were chosen for their local contributions to music and lesser so based on fandom. Do you feel that affects the overall homage to the series’ music? Or were contributing participants asked to apply based on a love for the show?

SR: I think everyone was a fan. There was someone who had just recently watched it, but there was a message that Jeffery had put out initially just to … he messaged people just to see if they were interested with no promises that they would be included.

RK: Sure. Having heard it all come together, did the music come off as wholly its own thing or take influence from Badalamenti/Cruise? Or perhaps more the Roadhouse style of The Return? Or were interpretations based directly off tones interpreted from the characters—Laura Palmer, BOB, the Log Lady, The Arm?

SR: I did hear parts that were like Julie Cruise, and there was like the kind of chord, that interval where … little phrases thrown in, original music but those phrases here and there.

RK: I saw some descriptions in the Observer article, but in my head I hear a jazzy Arm and a hardcore BOB? Did that play out at all? Were you surprised by any of the interpretations you heard?

SR: The first band that had Log Lady, I think they had a more open arena interpretation … The Arm—I don’t know if it was a little jazzy, maybe. I can’t remember. Every band took little parts, like phrases, lyrical content, you know, and infused it into what they were doing. The Arm was more focused on the Waiting Room. I’m not going to say it was jazzy. I don’t think it was jazzy. I don’t remember.

RK:  How long or often did your selected band get for practice and composition?

SR: We knew three months in advance, but it was the holidays and one of our members was on tour. And we’re super-busy musicians, so it was a little bit difficult. I think we had five or six practices. We recorded our practices, too. Two of us brought compositions to it. Well, we brought things together. I brought a piece.  Sammy Rios (Rat Rios) brought a piece. Paul Hernandez (Bummer Vacation) had a riff that we worked on. Everyone’s idea got pursued. We had to come up with twenty-five minutes of music, and we had seventeen, so we expanded things a bit.

RK: A lot of the rock lotteries I went to, you were either going to have these very definable songs that were structured, or there was the possibility you were going to watch all of a 25-minute song, an opus.

SR: Oh, no. I think we had five songs. We did a vocal, an all-vocal thing to start out with that was chanty, like Gregorian Chant-ish. It was real short.

RK: You know, back to my question earlier, I think that’s an interesting one. Gatherings like this almost necessarily beckon back to music from season one and two. Was there any discernable influence that you felt uniquely came from The Return in this festival, be that in the visuals or in the music?

RK: Okay, excellent, and now a little bit about you. I know you have always been highly inspired by Dune. Is that more the Lynch interpretation of Dune or the original works of Herbert. One doesn’t necessarily cancel out the other. Just, where did that come from for you? Where did it begin?

SR: I think just being a Lynch fan, and then, David Lynch was the gateway drug to me reading the Chronicles of Dune, which I’m a big fan of.

RK: Now, in your art, I’m specifically referencing They Say the Wind Made Them Crazy. Has there ever been a Lynchian (I’m going to use that word in this instance) influence? I guess what I’m getting at is that my experience with your work has always had a kind of subdued darkness to it, a dreaminess that I tend to associate with 80’s 4AD artists like Cocteau Twins, This Mortal Coil, etc. I don’t mean to interpret that for you. How do you interpret your inspirations?

SR: Like for They Say the Wind Made Them Crazy? Yeah, that is more influenced by, I think, all of the bands that I’ve been in, that I’ve been a composer of music for, has had an influence of where I came from or the land that I grew up on, my family, my dad, …

RK: Is there anything from the night that I haven’t covered, or anything that you would like to add or share?

SR: I think it’s funny that Daron Beck (Pinkish Black, The BOB Band) and I were both in this, and I had played in Daron’s band before and we covered “Into the Night.” I had a band called The Black Lodge at one point, and previous to that Daron had a band called The Smiling Bag that I played in some. We would just play around Halloween … I was roommates with Daron. I watched Twin Peaks my first time with him. He had already seen it many times, but we marathoned it when we were roommates. So, there are just a lot of connections, and it’s funny that years and years later, here we are, doing it again.

RK: Yeah, I mean, I’ve come back fully myself. I’m doing this interview. It happened again. Anyhow, thank you for your time. 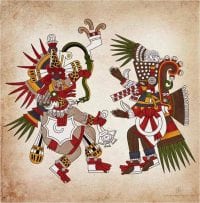