When I write about Twin Peaks there is a lot of things going on inside. I’m a highly visual person – I need to “see” things in front of me – and I have a strong need to create visuals and images out of the more abstract qualities that thoughts, relations, and ideas have. Therefore, to process and filter everything that’s whirling around in my head when writing for 25 Years Later, I sometimes put the computer aside for a while. Instead, I pick up my pencil and paintbrush.

My two latest articles – A Journey To The Underworld Of Twin Peaks and Invitation to Fear – add up to 14,100 words together and that is, well, a lot. To process and to focus during the intense periods of researching and writing these two articles I worked on a piece of art as well. This post is a little bit different because this time instead of a new article I want to share that artwork with you. 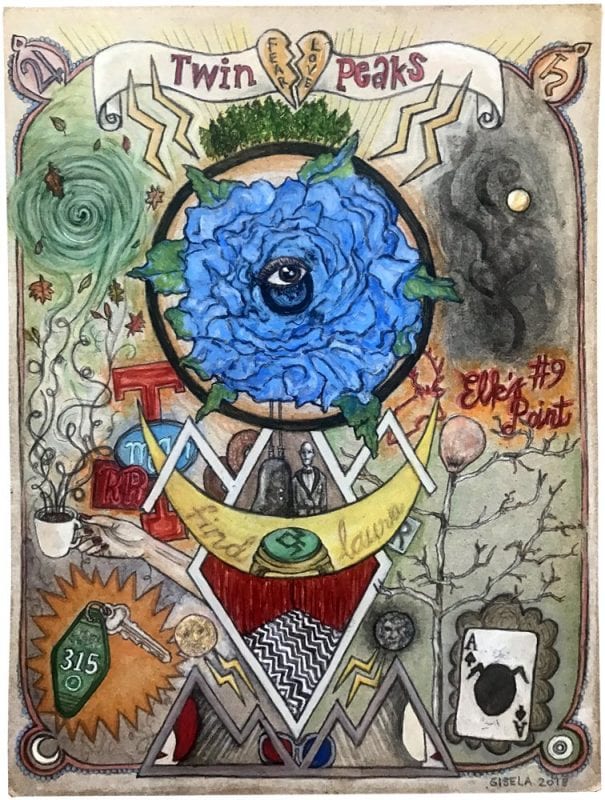 (Feel free to share this, by the way, but please use my name and this page as a source if you want to do so! Thank you.)

I have been asked to say something about “Between Two Worlds” and what it depicts. I also thought I should use the opportunity to give some tips of articles from our site’s fantastic archive for you to explore, should you be interested in learning more about something in particular. This way, my piece may be used as a portal to further exploration.

There’s a good amount of symbolism in my picture as I’m sure is hard to miss. Some of the symbols, however, might be easier to spot than others. I think I’ll just go through them all.

Overall, there’s a symmetry and duality to the composition. Compare the left and right sides and you’ll see that the composition is made up by five main middle symbols: the alchemical ones for gold/sun and silver/moon, The Owl Cave symbol, the twin mountains and, inside of the sun circle; the Blue Rose. These tie into the mythology of Twin Peaks that is all about duality (sun to moon, mountain to mountain) and the mysteries of the Owl Cave, the Ring and of the Blue Rose cases.

In the top middle, we see the heart necklaces, here inscribed with FEAR and LOVE – another duality – instead of “Best Friends”. The Ghostwood forest is there, too. Such an important place must be represented. Inside of the yellow crescent moon is the Ring surrounded by the words “Find Laura” – Leland Palmer’s only line in The Return but a highly significant one considering how Agent Cooper changed time and events…

Inside of the Owl Cave symbol, the Fireman stands majestically in his White Lodge above the Moon, and underneath the Moon, we see the Black Lodge. The twin mountains at the bottom contain one Diane each and between them is Dr. Jacoby’s glasses, a duality in their own right.

Dr. Jacoby’s alter-ego Dr. Amp’s electrical arrows can also be seen on both sides of the middle. The symmetry of dualities continues on both sides with the symbols for the Moon and the Sun again at the bottom corners. Above them are two different objects that each represents the “two Coopers” – Agent Cooper (the 315 hotel room key) and Mr. C (the “this is what I want” ace of spades card). Above each of the mountain peaks are the two orbs of Laura and BOB from Part 8 of The Return.

On the left side, we continue with an arm/hand holding a cup of coffee, some donuts and the signs of the RR Diner – all are symbols of the social part of town where people meet to share a cup of joe together at the diner or Sheriff’s Department. The right side, instead, consists of another arm; the Black Lodge’s Evolution of the Arm tree. Between its branches is the letter ‘R’ from underneath Laura’s fingernail. Instead of the warmth of the RR, there’s the red sign of the eerie Elk’s Point #9 bar where Sarah Palmer revealed her inside and killed the creepy Truck You dude. All in all, the right side is mysterious, morbid and much darker than it’s counterpart.

From the Elk Point neon sign, the Black Fire rises to carry a “seed” of gold with it, just as it did with the tulpas in the Black Lodge. On the left side, the steam from the hot coffee rises instead and it forms the whirlwind vortex of the portal in the trees by Jack Rabbit’s Palace. Early autumn leaves are sucked into the swirl, some of them from the single Sycamore tree. Finally, in the top corners are the symbols for the planets Jupiter (left) and Saturn (right). For those who might not remember, these are the planets who cause the door to the Black Lodge to open when they “meet” (become in conjunction and “unite”).

Now, if you want to use my “Between Two Worlds” as starting position for further exploring, here are some highly recommended links to excellent articles on our site!

What DO We Know About The Owl Ring? by John Bernardy

Notes from the Bookhouse: Diane’s Dweller on the Threshold by Lindsay Stamhuis

The Fractured Self: Shattered Identity And Twin Peaks by Andrew Grevas

And a few of my own that relate as well:

Lost in the woods – The connection between Sycamores and portals, part 2

Do You Really Want To Fuck With This? The Alternative Timeline Of Sarah Palmer

Thank you for reading us! 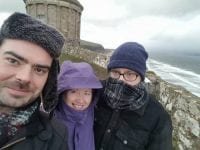