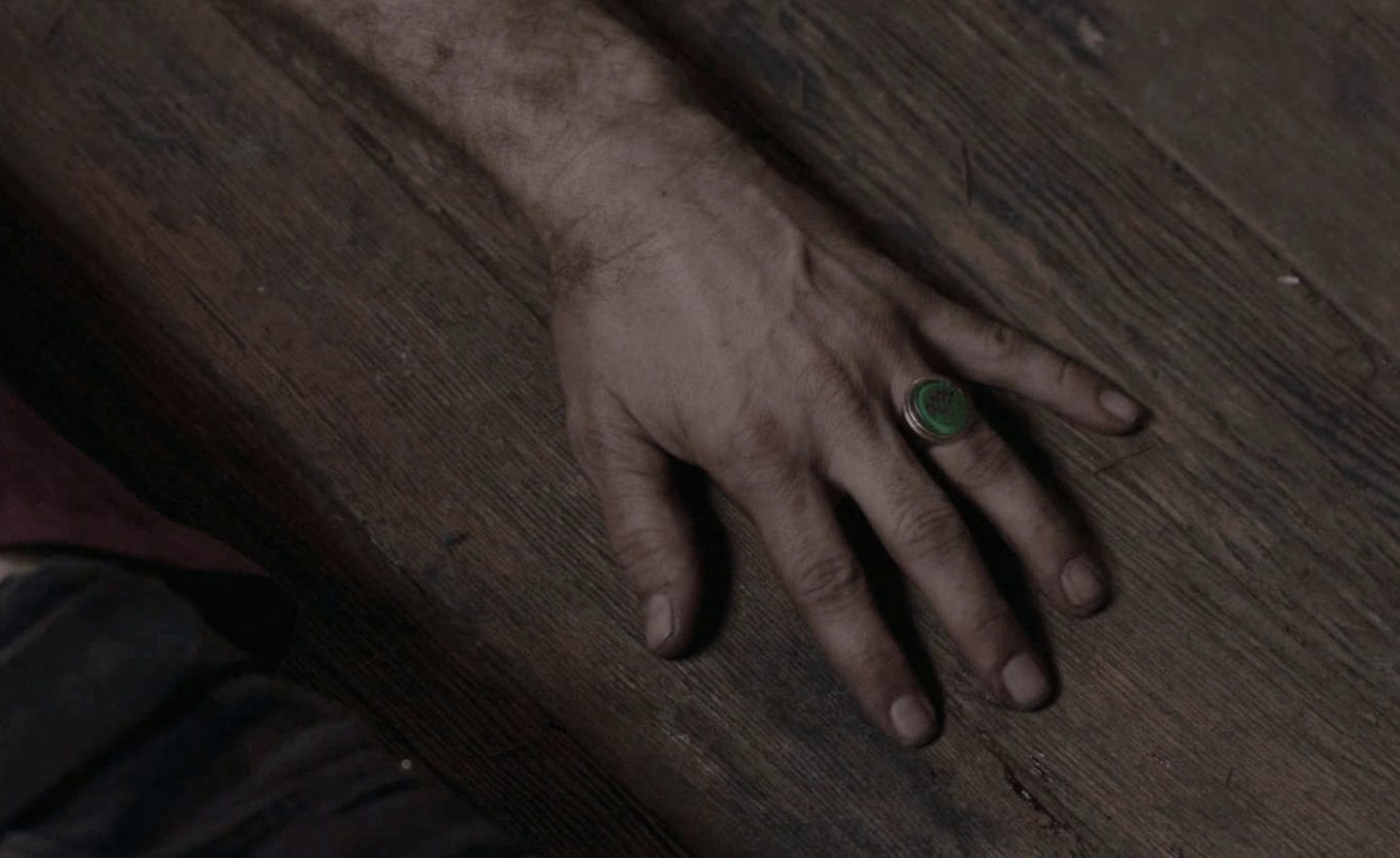 The Owl Ring resurfaced in Part 13 of the Return, ten hours since its last appearance, and thanks to DoppelCooper sending Ray Monroe’s soul to the Red Room as a message to Phillip Gerard (much the same way terrestrial mobsters send a severed finger in a box to their rivals), these three things are now fairly explicit:

The Owl Ring was introduced enigmatically to the Twin Peaks mythology in Fire Walk With Me. In the movie’s convenience store scene, the Little Man From Another Place holds the Ring up and says “With this ring, I thee wed.” For years, people have theorized this meant when Laura wore it that it solidified a pact with the Lodge, and the evidence continues to support this as close to fact as you can get in Twin Peaks. Also, based on what just happened to Ray, I’d say we now know exactly how Laura entered the Waiting Room at the end of Fire Walk With Me. Not to say they’re anywhere near the same importance level, but based on Laura’s presence in the Lodge this means we also may not have seen the last of Ray Monroe’s visage in the Return.

The Owl Ring is a literal and figurative connection to the Waiting Room, but thanks to its frequent appearances in The Secret History of Twin Peaks we also know there’s more to it than that.

Chief Twisted Hair is the first character we see with the Owl Ring. He knew the Ring was a powerful object and he showed proper respect and restraint by keeping it in a pouch. He imparted this knowledge to Meriwether Lewis before he gave him the pouch for Lewis’ journey into the point where the two mountains meet. Lewis continued to keep the Ring safe in its pouch, always around his neck or near him, and to our knowledge he only used it as a key to open a gateway.

That all changed when Lewis was ritually murdered in a scene not that different from the train car in Twin Peaks, dirt mound and all. It is presumed (though not proven) that Lewis’ disappearing killer James Neely (also technically unproven) took the Ring along with other possessions of Lewis, and the Ring was lost to time until it reappeared on rocket scientist and Thelema magician Jack Parsons. The Owl Ring’s full dangerous power was unleashed on Parsons because he wore it directly on his finger. His spiritual finger no less. Parsons rose to the top of his field, achieved his goals both in science and in magic, though towards the end of his life he became disgraced, paranoid and reclusive. Before The Return, I thought the Illuminati types who staged the explosion that killed Parsons went in and stole the Ring right off him before proper authorities arrived, but now seeing Part 13 I believe Parsons’ soul was pulled from his body into the Waiting Room as well.

The next person wearing Owl Ring (skipping over the heavily implied President Eisenhower who once disappeared for 42 hours) is Richard Nixon. His ambitions were large and he rose all the way to the top of Nixon’s ambitions, which meant he became President of the United State of America. And we all know that as soon as that happened he unraveled more and more. It seems he lost the Ring or removed it sometime after the impeachment process began because Nixon was still well enough alive when we see the Ring on Teresa Banks’ finger.

I suggest Teresa Banks was not wearing it long at all because her ambitions were not elevating her rapidly in status. I believe because she was already mixed up with Leland when the Ring appeared in her life that BOB killed her before the Ring could become a problem for him. And we won’t see her in the Waiting Room because she wasn’t wearing it when Leland killed her. It was possibly under her trailer waiting for Chet Desmond to pick it up and disappear. Desmond’s the guy we may see in the Waiting Room.

After Chet Desmond, we see MIKE, or Phillip Gerard, with the Ring, and he actually wears it. He later gives it to Laura in the train car and it disappears again only to surface on Annie’s finger after the Season 2 finale trip to the Lodge, and then is taken by the nurse.

All the people who’ve taken the ring besides Annie and Laura are drawn to its power. Before Secret History, I used to think “you wear it, you die,” but that was because of Laura and her extremely small data sample size. After all of its appearances I’ve just mentioned, I have this general understanding of the Owl Ring:

The ring marries its wearer to the Lodge, and with this wedding the wearer is imbued with an electric force from the Lodge that is used to gain power and achieve their heart’s desire. After their initial heart’s desire is achieved, the wearer’s rise is followed by a tumultuous fall as their body and mind are either burnt out from too much power, or the Ring (using some kind of ebb/flow principle) vampirically pulls back the electric force from the wearer in some arcane electrical circuit. Either way, the wearer is left with nothing but a numb left arm and is given a downfall like we see with Nixon, or Parsons as he literally dies by fire.

I think this rise/fall formula doesn’t apply to Laura Palmer because her heart’s desire was to die, which means the energy transfer had no time to happen, and the typical Lodge transaction was cancelled midstream. Though I believe her scenario began just like all the others: with Phillip Gerard bringing it through the curtains into our world, just like I hope he’ll bring Cooper his shoes before The Return is over.

Before Secret History was released, people have theorized that the Owl Ring allowed for a form of time travel because, while wearing the Ring in Calhoun Memorial Hospital, Annie Blackburn sent a message (“My name is Annie, and I’ve been with Laura and Dale. The good Dale is in the Lodge, and he can’t leave. Write it in your diary.”) months into the past to Laura Palmer’s bedroom when Laura was still alive. In The Return it was proven that this actually happened because Laura did write that message down as instructed. 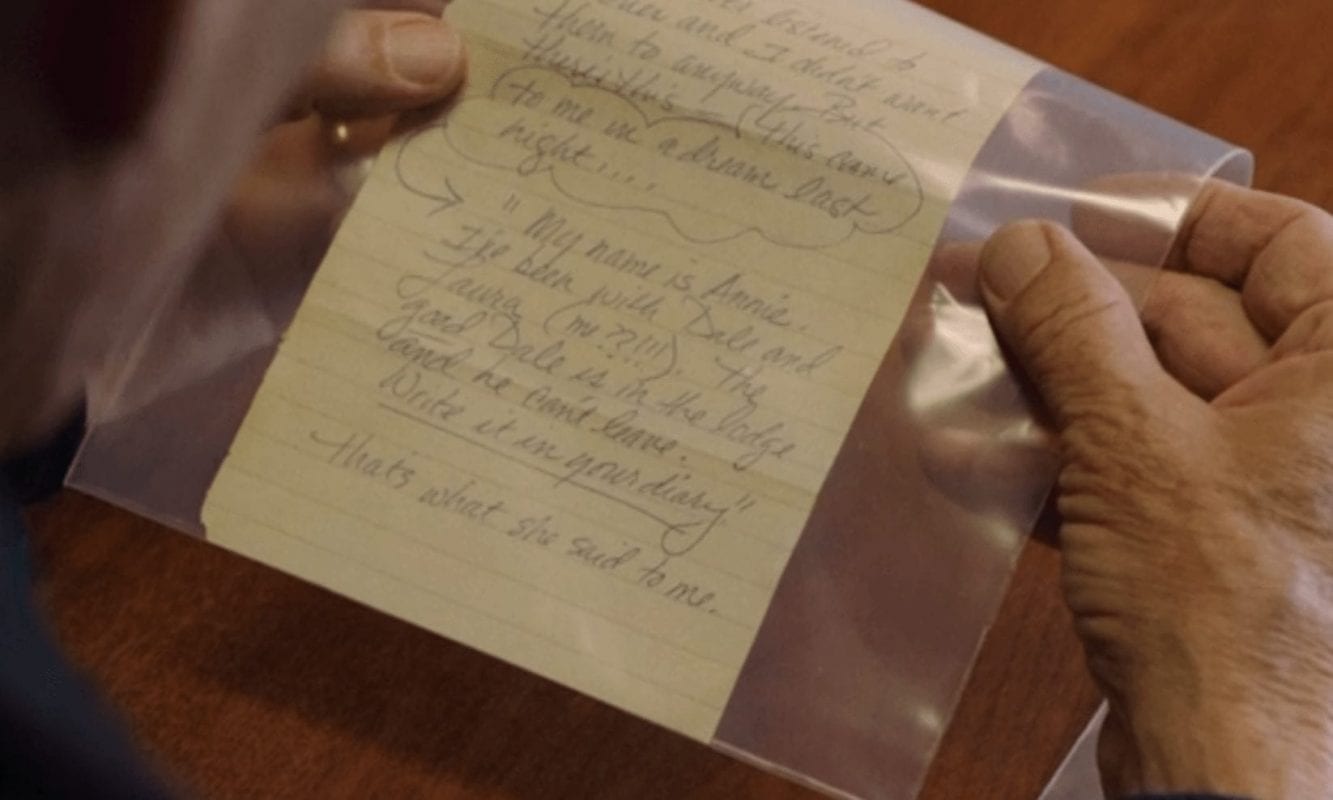 I think the Owl Ring does technically allow for time travel, but I don’t think it does it like a time machine; I think it’s another application of its portal connection property. The Ring appears to be a nexus point between our world and the Lodges, and therefore maybe its wearers can travel inside the Lodge and come out of it at any other point of time the ring exists.

I couldn’t help but be reminded of a joke theory an acquaintance told me once about Steak n Shakes (a fast food burger joint here in America): Since every single Steak n Shake is laid out in the exact same floor plan, there is actually only one single Steak n Shake in the world. Each individual location’s doors are really portals that take you to the one true Steak n Shake, so in theory if you forget you walked into the restaurant in Orlando, you might accidentally step out into Chicago. I feel the Owl Ring works in the same way, where the Ring is the doorway and the Waiting Room would be the restaurant in the metaphor. Once you wear the Ring you could transport somehow to the Lodge, and you could pop out of the Ring anywhere the Ring’s ever been. This part is obviously conjecture, but it’s backed up by the fact that Dougie Jones (the original guy, not CooperDougie) was pulled into the Waiting Room and he did not die to do it. He merely had the Owl Ring on his finger. It seems once you’re connected to the Lodge you’re always part of the Lodge, because you’ve been pulled away from your moorings on this Earth and are somewhat a portal yourself now.

If I had to sum up the Owl Ring’s properties in three points, it would be these:

And if I had to sum up the Owl Ring in one sentence I would say it like this:

For further reading: How does the Owl Ring do what it does?