Many viewers fell in love with Twin Peaks as soon as they heard the first three notes of the now classic opening theme during the title credits—credits which during the original pilot ran for an incredible three minutes! There were many other musical pieces heard throughout the two hour episode, most notably “Laura Palmer’s Theme” and vocalist Julee Cruise performing “Into The Night” and “Falling” inside the town hangout, The Roadhouse. Over the course of the original series, more than 200 pieces of music would be written and performed by composer Angelo Badalamenti who previously worked with David Lynch on Blue Velvet. So choosing less than ten out of 200 wasn’t easy and while we all love “Laura Palmer’s Theme” and “Audrey’s Dance”, for this piece I wanted to showcase more lesser known or varied selection of music. Some are light and some are heart–wrenching but each are uniquely important to the world of Twin Peaks.

The “Twin Peaks Theme”, as its listed on the official original soundtrack album, is actually the instrumental version of “Falling,” a song created in collaboration between Badalamenti and Lynch with lyrics sung by vocalist Julee Cruise from her 1989 album Floating Into the Night. The song was recorded in New York with synth music maker Kinny Landrum creating the twangy signature sound of the Twin Peaks theme using an Emulator II. Once that sound was captured, “Falling” was completed and the instrumental version was used for the show’s opening credits. That theme then became one of the most best-selling TV themes in history and earned Badalamenti a Grammy for Best Pop Instrumental Performance in 1991.

Along with the show’s soundtrack album becoming a huge seller, its music became an inspiration for artists such as Moby, Paul McCartney, Lana Del Rey and even metal band Anthrax. When Twin Peaks returned in 2017, the visuals might have changed but the theme remained and its no wonder; Twin Peaks just wouldn’t be Twin Peaks without it.

Dance of the Dream Man

In “Zen, or the Skill to Catch a Killer,” or Episode 2, Agent Cooper (Kyle MacLachlan) stirs restless in his bed in room 315 of The Great Northern Hotel clearly having an uncomfortable dream. This dream takes place in a room with red curtains and a floor straight out of Eraserhead. Within the room, Cooper sits in a chair and is aged considerably. Here we are introduced for the first time to The Black Lodge, also referred to as the “red room.” Inside the room, Cooper is joined by an elegant Laura Palmer and a diminutive man (Michael J. Anderson) with a penchant for speaking backwards. After a brief exchange between Cooper and Laura, music starts to play from somewhere, strobe lights flicker and the man begins to dance and with this particular music playing, who can blame him?

Badalamenti’s “Dance of the Dream Man” is a delicious fusion of groovy jazz featuring drums, finger snaps, bass, vibraphone and sax that accomplishes something most great visual art does: it transports the viewer into another world. This was the point in the series where audiences decided to stick with the show or not and obviously, they did—for a while anyway. Nevertheless, the music lived on and whenever this tune fills the air, it would be hard for anybody to resist the urge to start dancing.

Attack of the Pine Weasel 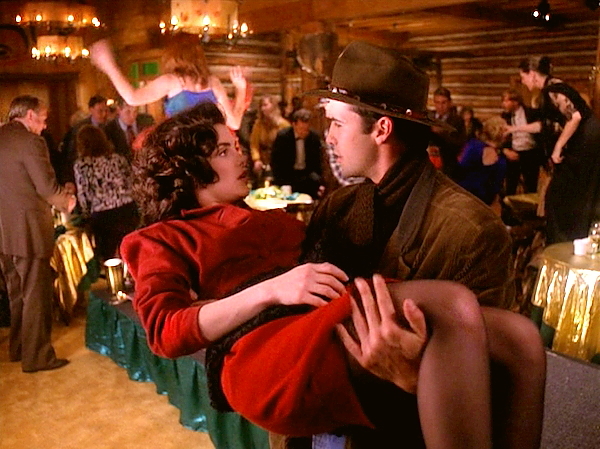 Season 2 of Twin Peaks is certainly full of some of the series most shocking and terrifying moments. However it also contains many moments of pure lunacy. One of these more outrageous moments occurs in the James Foley directed Season 2 episode “Wounds and Scars.” During the Stop Ghostwood Fashion Show organized by Dick Tremayne (Ian Buchanan), a pine weasel is presented to him by Mr. Pinkel (David L. Lander) but the rodent decides to cause chaos when it bites Dick on the nose. Then the pine runs loose frightening everybody in attendance except of course John Justice “Jack” Wheeler (Billy Zane) who is happy when Audrey (Sherilyn Fenn) falls right into his arms. Badalamenti’s pine weasel music is perhaps the most zany thing he’s written for the series. Incorporating a kazoo underneath a pulsating baseline, the pine weasel music sounds like a comedic riff of Of Booker T. and the MG’s classic tune “Green Onions” (a song actually used years later in an episode of Twin Peaks: The Return).

In this Season 2 episode titled “Drive With A Dead Girl” (Episode 15), Ben Horne is being held in a cell inside the Twin Peaks Sheriff’s Station under suspicion for the murder of Laura Palmer. He is visited by brother Jerry who informs Ben he will be his legal council as Ben’s regular attorney, Leland, is himself charged with murdering Jacques Renault. Unfortunately Jerry is of little help to Ben legally speaking and to temporarily help take Ben’s mind of his current situation, the two reminisce about the babysitter they had as kids, Louise Dombrowski (Emily Fincher, who is yes, the sister of Fight Club director David Fincher) who with a flashlight entertained the boys by dancing dancing in silhouette for their amusement.

The visuals may look like something out of a Fellini film, but Badalamenti’s music incorporates the twangy flourish of the main theme into a ’50s style Doo wop. This little bit of delightful music would show up again when Cooper flirts with Annie in the Double R Diner. No wonder everybody wound up smiling by the time the song was over. Who wouldn’t?

When I think of Twin Peaks (the original run), the final ten minutes of this superlative episode from Season 2 titled “Lonely Souls” is the one which encapsulates why I have loved this series so much for the past 25 years. Sure, the coffee, the pie and the donuts are all charming but for me, the real power of the series lies in its darker, even terrifying moments, and none were as dark and terrifying as the shattering revelations, surprises and horrors presented to us at the conclusion of this episode. Chances are if you’re reading this article, you know exactly what I’m talking about.

“The World Spins,” written in collaboration between Badalamenti and Lynch was another song featured on Cruise’s album Floating Into The Night (personally one of my favourite albums ever). While “Falling” moves the heart, “The World Spins” pierces it. Featured immediately after the terrifying murder of Maddy (Sheryl Lee) at the hands of BOB, Cruise is seen onstage at the Roadhouse performing this song in front of a visibly affected Agent Cooper who senses something tragic has just happened. With a sorrowful visit from the Great Northern waiter and everyone around him sobbing just from the helpless awareness of the unspeakable terror in the world, Cooper looks helplessly upon Cruise as visions of the red room fill his mind. This is Twin Peaks at its most powerful, haunting—and magical.

Here’s a song which wasn’t featured in the series but was in Twin Peaks: Fire Walk With Me. This music plays in a dingy bar called the Pink Room where Laura and Donna joins Ronette Pulaski to take drugs and party. The sequence begins in the Roadhouse where Laura watches Julee Cruise perform the ethereal “Questions In a World of Blue.” While Cruise’s voice may represent an angel who watches over Laura, “Blue Frank” is the musical equivalent of the character’s ultimate descent into Hell. One can almost smell the stubbed-out cigarette butts and spilled beer in the floor from listening to this music. With its thumping bass and wild guitars, the music can be seen as a representation of Laura’s heart practically on the verge of exploding while the guitar represents her cries for help. As tragic as it all is, “Blue Frank” is the perfect music to accompany a soul careening towards tragedy. If Hell has a bar you can bet this is the music that plays there at least once per night. By the time the song is over, one can sense that the devil himself has gotten a hold of Laura’s soul and he’s not about to give it up. The only missing from this sequence is a visit from Blue Velvet’s Frank Booth.

I have previously mentioned on this site that my favourite scenes of Twin Peaks were when we ventured inside the strange, red-curtained, other-worldly place known as the Black Lodge also commonly referred to “the red room.”  In the Season 2 finale “Beyond Life and Death,” Agent Cooper descends into the Black Lodge to rescue Annie Blackburn from Windom Earle. The Black Lodge is a place where one enters to confront their shadow self and as we learn, sometimes the shadow self is the entity which ultimately emerges. To fit the strange world visually, the music had to be strange as well but its instruments were reality-based. The sound is made up of random bass instruments plucking at various intervals. If the world of Fellini’s Satyricon were to be performed by a jazz quartet it would sound like this.

At times inside the Lodge, Cooper seems unaware where to turn as it is easy to find oneself lost among the intersecting halls which lead into the same rooms of red curtains and zig-zag floors. What can you do when one is in this strange world but follow the music? Occasionally, the screams of the Lodge’s other inhabitants (Laura, Windom Earle) pierce the air but after those, the music becomes the character’s guiding sound.

This episode is without question, one of the most arresting hours of television in history. It redefined strange and the music accompanying Cooper’s journey was no less strange. It’s funny to think that in The Return, these sounds actually became a source of guidance and comfort for Cooper/Dougie Jones and it once again proves that in the world of Twin Peaks, beauty can often arise from the strangest and mysterious of places. 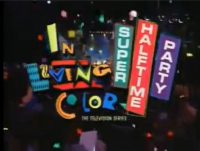