There is something unquestionably special about the Season Two finale of TWIN PEAKS. Aside from the fact that it is my all time favourite episode of the show, it marks the return of David Lynch to the Director’s chair and thus carries his particular flavour, without which, the show and it’s legacy would be extremely different.

When it comes down to it, television generally goes out in one of two ways – before it’s time, or long after it should have. TWIN PEAKS is somewhere in the middle. At the time, considering Frost’s and Lynch’s absence from the project, as well as the network’s earlier insistence to wrap up Laura’s murder, it’s unsurprising to me that TWIN PEAKS found itself on the chopping block. Don’t get me wrong – for all of Season Two’s faults I still love the show exactly the way it is. There were so many places left to go, but the show had lost track of its origins, and strayed from any real plot into a formless meandering something. And then came the finale.

Season 2 Episode 22, or Beyond Life and Death (From the German title Jenseits von Leben und Tod, literally translated On the Other Side of Life and Death),  is the single best series finale I have ever had the pleasure to watch, and will undoubtedly continue to be so…though I may have to reevaluate after Season Three concludes on September 3rd 2017!

Most series finales (even ones like Beyond Life and Death, where the goal is to push for another season pick-up) don’t really manage to deliver. For those aware that the end was in sight, series finales seem to piecemeal together all the best and most icon pieces of a show, callbacks and shout-outs to their fledgling upstart selves that leave us in the comfortably warm glow of nostalgia, despite the occasionally bittersweet end (Burn Notice). Some try to quickly and neatly wrap things up, with mixed results (Gilmore Girls). Some alienate their fans altogether (How I Met Your Mother). Some just cobble something together in hopes that it will make up for any missteps along the way and that no one will recall them afterwards (House, M.D). But amongst the Good, the Bad and the Ugly of finales, Beyond Life and Death might just be one of the best, if not certainly the most memorable.

On June 10th, 1991, Episodes 21 and 22 of Season Two aired back to back with a US viewership of 10.4 million as compared to the 7.4 of Episode 20, and the Season premiere of 19.1. It is now received to much critical acclaim, especially as it showcases some of the most revolutionary avant-garde scenes on television to date. But all that aside, what is it that truly makes the TWIN PEAKS finale so special?

Spoilers from here on in, so if you’re still trying to finish the original run of the show before the Season Three premiere read no further!

Having David Lynch and Mark Frost together for the finale episode alone might seem to some to be too little too late, but it’s really not. Somehow, instantly, everything seems back on track. Or at least everything that was possible to put back on track. Characters that we haven’t seen in ages appear again, plot lines that meandered are ‘resolved’ in as much as Lynch likes to resolve anything. And the mystery – the unsettling, frightening, strangeness that so markedly sets TWIN PEAKS apart – is once more infused into the fabric of the show. As a finale, all those things are great. In terms of the way time is perceived on the show it also creates a closed circle narratively, as we return to where we began for many characters, and even, harmonically, with some plots. Twin Peaks exists outside of time, or inside it’s own time, or in multiple times or, or, or –

From there we move to the Red Room/Waiting Room, where time really has no meaning. This mostly unscripted sequence highlights the pinnacle of surrealist filmmaking. Despite the fact that it contains very little dialogue, and many seemingly inane, drawn out moments, they all serve a greater purpose to establish rules that further the viewer’s understanding of what’s happening in the sequence, even if only subconsciously. Bold as ever, Lynch was unafraid (when is David Lynch ever afraid to do anything? Let’s be honest.) to do whatever he pleased in those penultimate scenes. Finales should and do give writers and directors creative license to go places that they might not have otherwise. With less constraint on plot and on decision making, especially behind the scenes from networks, finales have the potential to be as bold and daring as the writers and directors are able to make them.

While many don’t take advantage of that opportunity, or, as in the case of Dexter, are still being bullied by the network up until the very end, the Red Room sequence of the finale of TWIN PEAKS is a no holds barred, surrealist ride of insanity, iconic to the last. There is simply no good way to describe what it’s like to watch, and no matter how many times I do, it’s always the same. The closest I can come to doing so is to compare it to what I imagine being in one of those anechoic chambers must be like. The world around you is totally silent. You’re not distracted by anything. You’re so wholly engrossed that your spouse or brother or best friend could be yelling in your ear and you would never notice, because you are in the Red Room with Cooper. You’re there. It’s happening around you. Fifteen nearly uninterrupted minutes of pure, A-grade, Lynchian madness. They pulled out all the stops in that final third; from Doppelganger Laura’s heart-stopping screams to BOB laughing into the camera after Cooper is caught by his Doppelganger. No segment feels misplaced, and nothing is over the top. Everything fits together like some sort of postmodern, three dimensional puzzle bought at a strangely liminal IKEA.

But the most important factor that makes Episode 22 a stand out among series finales is the final shot of Dale Cooper in the bathroom, squeezing out his tube of toothpaste before taking a firm look in the mirror and then smashing his head into it. Blood streaming from the cut on his forehead, he looks into the shattered reflection and there is BOB, looking back. The ensuing “How’s Annie?” lines and uncontrollable laughter will haunt my dreams and the dreams of the collective audience forever.

There is nothing more terrible than watching white knight Cooper’s face twist into the horrifying visage of evil incarnate. Nothing more terrible except perhaps knowing that it’s the finale. As a writer myself I take a certain despicable glee in that idea. Lynch leaves us with the knowledge of who and what Cooper is liable to become, leaves our imaginations to fill in the blanks, allows the awful truth to sink in that Dale Cooper, earnest, caring, devoted Dale Cooper is not the Gifted at all, but the Damned. As such, it’s bitter sweet, being so fond of the Finale to End All Finales, and at the same time, feeling the excitement of Season Three.

I am immensely glad that I had the opportunity to watch Twin Peaks in full before Season Three was announced. It is a simple fact that the impact the finale has on audiences is altered by this fact. Now that we know about Season Three, (now that we are nearly two days from the premiere) viewers, though just as curious, are less likely to imagine their own outcome. Why bother? They’ll have it soon enough. Though the speculation has been unending in the two years it has taken to get to this point, it’s has been focused less on that particular element, and concerned more with the big picture questions: where do we go from here?

I’m glad that I didn’t miss out on experiencing that final dread, glad that I witnessed that remarkably daring and dark piece, that I experienced it without the benefit of hope. It’s a different finale, to be sure, for those who have joined the legions of fans after the announcement than it was for those before.

But, Season Three or no, the finale of the original run remains, and will forever remain in my opinion, the single greatest achievement on television.

What’s your opinion on the Season 2 Finale? How do you think Season 3 will alter its impact? Share your thoughts in the comments below! 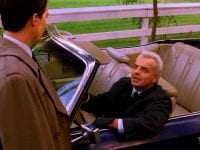