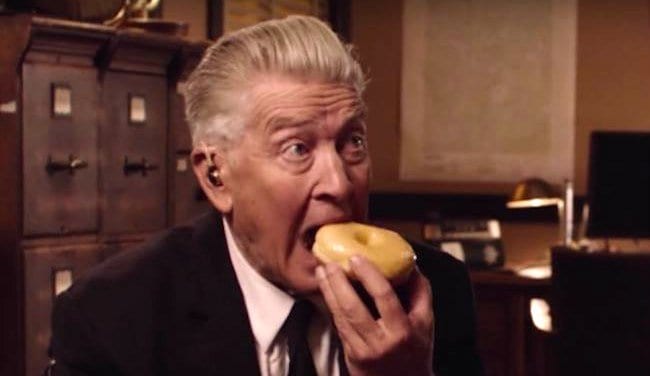 For the past few months I’ve been thinking of a cherry pie with a South Asian twist. Oddly, a couple weeks ago I found a cherries and chilies chocolate bar at Whole Foods. My skeptical side knows this is selective perception. I’ve probably passed that chocolate bar dozens of times and not seen it. But, it’s also a bit spooky. The Twin Peaks Effect is at full throttle.

I’m wearing the Double R Diner’s standard baby blue waitress outfit with white apron and edging. Half of my hair is blonde and falls in soft, sculpted waves to my shoulders. The other half of my hair is brown with subtle blonde highlights, wild, curly, and falls well past my shoulder blades. Both sides pulled back with a matching baby blue and white headband. Classic fire engine red lipstick on my mouth.

Today for lunch I am having a spring salad of baby spinach and kale with organic ground turkey, goat cheese, and gluten-free garlic croutons. The honey mustard dressing is vegan and delicious.

Hey Norma, have you ever noticed in film and television how people don’t actually eat on camera? They act as if they will take a bite, sometimes they do, but they don’t appear to eat? Even shows where characters are food-focused like Gilmore Girls feature enormous food spreads that often never even venture near a mouth. The absence of eating is one of many things I consistently notice in visual media —  along with people who aren’t looking at the road while they drive and women with smooth armpits in stories where hair is the least of their problems. It’s irksome.

But not in Twin Peaks, though. All those glorious scenes with doughnuts and pie and baguettes and blocks of cheese. The actors chomping away as the camera follows. That grand moment as the food goes from throat to belly in gulping swallows. Divine!

Remind me to show you the teaser trailer for the new hours featuring David Lynch as Gordon Cole devouring a doughnuts. That’s all it is: him biting, chewing, and swallowing. When I saw the clip for the first time I burst into tears. My hubby was so confused. How could I explain my tears over a doughnut to someone who isn’t of the Twin Peaks world? And that was also the first moment I realized that the new hours of Twin Peaks were really going to happen. The 30 seconds are so quintessential Peaks, my heart wanted to burst out my chest like a baby xenomorph.

Adding to my theory about the archetypal nature of Twin Peaks, these moments of actual on-screen eating humanize the show in a profound way. Where other show runners won’t deign to waste time on characters eating, that Lynch and Company delight in slowing the narrative down so we can all have a bite to eat is one of its more brilliant narrative tricks.

There is something meditative about watching these characters complete an activity most of us do several times a day that we rarely see on celluloid. It makes the place and the people feel real. One of my favorite aspects of the show is Agent Cooper’s missives to Diane about the meals he’s enjoyed, and how much detail and delight he puts into describing them.

Food is a vital part of life. Food is survival. Enjoyment of food is a privilege. It’s odd that we don’t see more of it on screen. I can only suppose that to some the act of consuming food is too banal to share on camera. If only they knew how much it all adds.

I do realize that it’s contradictory to posit the show functions on an archetypal and symbolic level while also claiming that the show has a sense of humanity and realness lacking in other visual media. This is what I love about surrealism: many contradictory things can hold true depending on which angle you’re looking from. Just think about a Dalí or Kahlo painting. It doesn’t make sense while making the only sense in the world.

I have another confession to make, Norma. In fact, I do not get hungry. At all. I get dizzy, weak, cranky, and ill, but I do not experience hunger. It took me ages to unpack when this began, and I’ve managed to trace it to the 4.5 years I lived in Pakistan as a child decades ago. After dinner my father would plop down a beer stein (half a liter) of buffalo milk in front of me. I was not allowed to leave the table until it was finished. Norma, that milk tasted like actual hot garbage. I would gag, spit up, and my father would force me to sit there until it was finished. “For my own good,” he claimed. The only times I was exempted from this grotesque ritual was if I vomited. This was torture by food. It was his way of hurting me without laying a hand on me like I think he wanted to. The man legitimately despised me, Norma. No exaggeration. And so as a result, I stopped getting hungry. Isn’t that just dreadful?

On the positive side, though, even in the short time processing my many thoughts on Twin Peaks through these Beyond the Red Room tapes my relationship to food has shifted, and for the better. I decided to sign up for a bi-weekly delivery of seasonal and local organic vegetables to spice up my palate. I spend hours each week cutting veggies for stews and soups, fruits for salads and the rare gluten-free pie. I am thinking of Gordon Cole and Dale Cooper and Lucy Moran and Ben and Jerry Horne as I carefully chew and swallow each bite of food I lovingly prepare for myself. It’s the first time in my life I’ve had this kind of healthy relationship with food. I owe it to you, Norma, and all our friends in Twin Peaks that these days I actually feel pangs of what I assume must be hunger. It’s pretty damn amazing. It’s also uncomfortable, but that’s the point of hunger right? To provoke us into edible action?

Oh, and the chili cherry chocolate bar I told you about? It was equal parts sweet and spicy. Remind me to develop this into a unique cherry pie recipe for the Double R. A couple teaspoons of ground cayenne pepper to a traditional cherry pie should do the trick!

Yours in food and love,