“What lives inside Sarah Palmer?” was one of the big questions in Twin Peaks 3. Was it a spirit from the Black Lodge? Was it Laura? Was it The Experiment? Was is the Mother that Naido was so frightened of? Was it something else entirely?

Well, Peakies, turns out it was indeed something else entirely: ME. According to some of our community members, the monster living inside Sarah Palmer is yours truly. 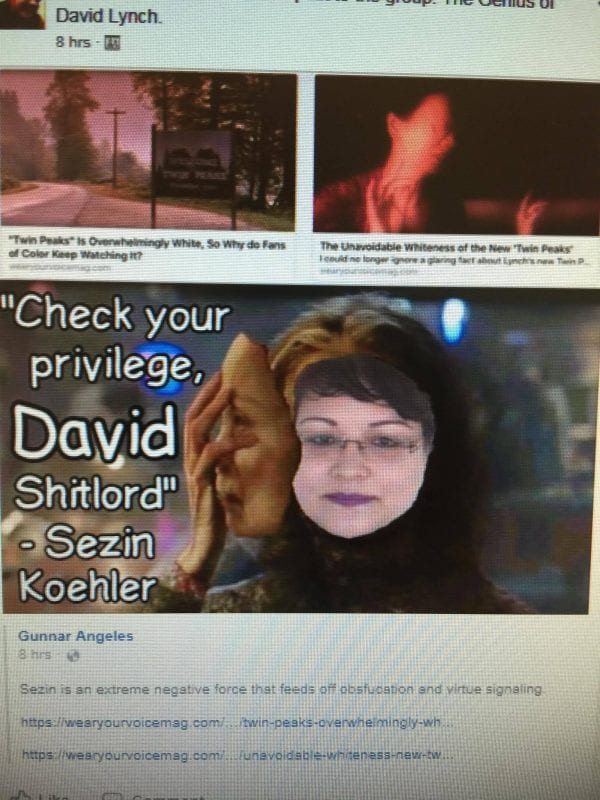 Whew! With so many outstanding questions in The Return you have no idea how relieved I am that at least one loose end has been tied up. And damn, y’all! If I’d known that I’m the throat-tearing strange-fingered creature I would have spoken up way sooner. All apologies.

And why was it me specifically? Because I wrote an article about the troubling cultural appropriation and yellowface-adjacent issues that had been bothering me since that bizarre finale. Some of our less socially and culturally evolved community members were so irked by my thoughts and the evidence I presented that they took it upon themselves to fling their poo at me, and continue to do so. That is yrev very un-Bookhouse behavior, comrades.

So far I’ve been accused of “racebaiting” (which is a term that originates in the American Nazi community), reverse racism (which isn’t a thing), attention whoring (I didn’t even publicize the article in question so I’m curious how it took on a life of its own without any of my help), and been told that “people like me” aren’t welcome in the Twin Peaks community anyway. Plus so much more. Go read through the comments on the article and see for yourself what some of our Peakie sisters and brothers had to say. Sickening. As someone who wrote a piece about South Asians being marginalized, it’s next level fucked up to tell me that I need to leave the town I’ve loved for 20 years. In fact, it quite mirrors the politics of the day in America at large.

But it just gets clearer to me: I’m the monster inside Sarah Palmer because I expose the darkness in Twin Peaks as well as our real-life community. I often take my face off and show perfect strangers my scars so we can start talking about violence against women, racism, abuse, and all levels of trauma. It is not something I enjoy doing. It often hurts me in my soul and sometimes so badly that the pain manifests in my body. The pain I feel when I write about difficult and uncomfortable topics only worsens when people choose to target me for speaking out instead of looking at the monster I’ve pointed out that might live inside them. Growth is painful and not easy. And shining light into the darkness—in my case through written words—is one way to learn and work towards being a better human.

What was worse, though, was as this racist and sexist shitstorm was hitting me online after my article came out, I was getting hit in real life with Category 4 Hurricane Irma. My phone alerted me simultaneously to tornado warnings in my area (that touched down just miles from me) as well as misplaced fury from “fellow” Peakies at what I’d written. My husband and I lay on our bed in the safe room, holding hands like that old couple at the end of Titanic, and listened to the horror movie sounds of the storm. Air that screamed, moaned, growled, shrieked through every tiny opening in our home. We watched in terror as the glass on our patio door began to buckle under the strain of tornado after tornado pressure. For 36 hours we were in mortal fear for our lives. For 5 days we had no e-lec-tri-city. By day 3 I was ill with extreme heat exhaustion. By day 5 had the power not come on I would be in the hospital. My brain still feels mushy from the totality of the hurricane experience even now days later.

All the while, I was getting targeted harassment from certain community members on social media. Because of an article I wrote. About a television show. That they didn’t like.

The word surreal has lost all meaning for me.

The ironic thing is that I absolutely love seeing my face as the creature inside Sarah. One of my alter egos is Zuzu Palmer, after all. I guess it runs in the family, eh? It’s also no secret that her takedown of the DoucheTrucker is my new favorite scene on television of all time. I would go to some lengths to have that kind of power. And I’m actually flattered that someone is so terrified of little old wordsmith me that they would equate my humble self with the incredible force that drives Sarah Palmer. I would be thrilled to see a fan edit of Sarah’s scene with my face in action there; if anyone knows how to make this happen please hit me up and let’s collaborate.

But in spite of my ability to make lemonade of this bitter situation, I cannot ignore the fact that so many members of our beloved community have such poison in them that they have tried to infect me with. Fix your hearts or die, people. Or at least direct your vitriol somewhere more productive. You will not end racism or sexism by scapegoating me. In fact, so many members of our esteemed community have outed their bigotry and wilful ignorance in horrendous ways. I hope y’all know that people are keeping receipts of your hateful words.

For a hot minute I did debate packing my things, ending this Beyond the Red Room column, leaving all the Twin Peaks Facebook groups, shuttering up my Bookhouse for old-timers, and getting the hell out of dodge. Who needs to be treated like this over a fictional town? Fandoms should be engaging and enjoyable, even if some discussions are difficult. I mean, how can we not have difficult discussions about a show based on the sexual abuse of a young girl at the hands of her father?

Instead, I called for help and my Peakie family rallied behind me like a badass army and shut down a Deputy Chad harassing me on Twitter. I went back through the comments on my article and saw many people who don’t even know me defending my thoughts and work in marvelous ways to those saying hateful things. It was my old-timer Bookhouse members who alerted me to that ill-intentioned meme and helped get it shut down on Facebook. My broken heart mends and fills again with renewed love for my town and community. Thank you, Fam.

I had to take some steps back and remember that the majority of you Peakies are the best,  most intelligent, ever thoughtful and considerate people it has been my pleasure to encounter either on or offline. Why would I leave my amazing Peakie family members just because of a fringe group of jerks?

Twin Peaks is my town, too. And I’m not going anywhere. You want to try me? Go ahead.

But remember: I’m the monster who lives inside Sarah Palmer. Do you really want to fuck with this?