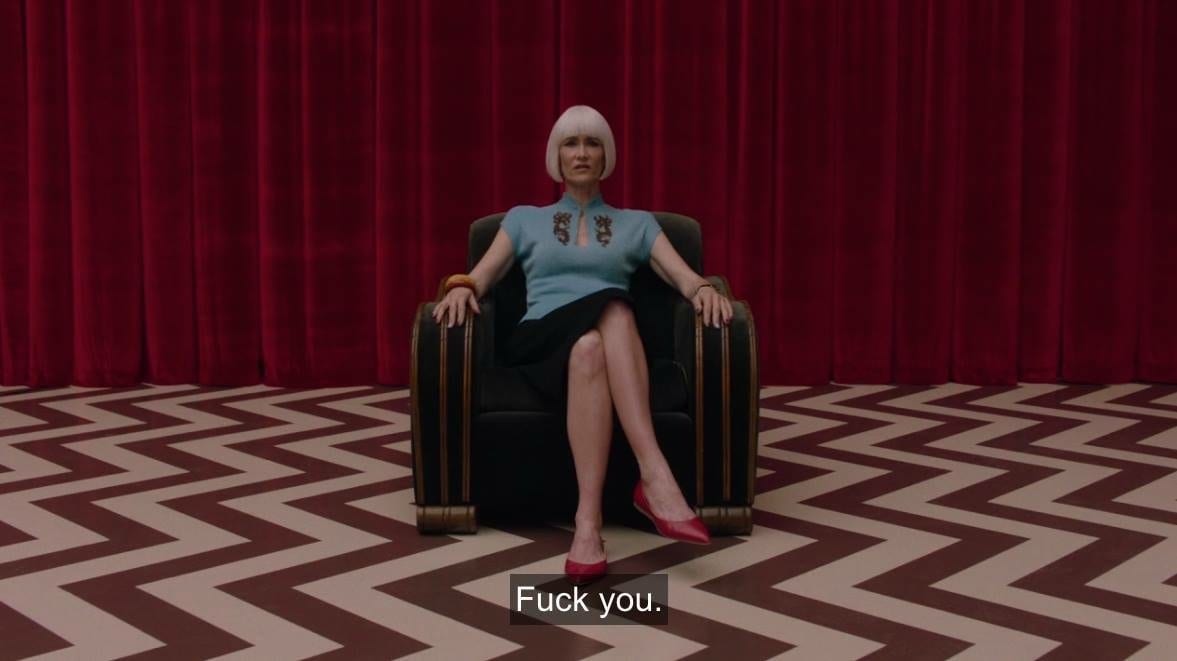 Every new hour of The Return has been more amazing than the previous. My favorite new part has been supplanted each week without fail, and Part 16 was a special pièce de résistance before tomorrow’s finale. Coop is finally awake! Ding, dong, the Dick (Horne) is dead! Audrey’s dance! Eddie Vedder at The Roadhouse! Finger sandwiches!

But we also definitely know what DoppelCoop did to Diane. And Audrey.

If women in the Twin Peaks community stood up and cheered while simultaneously screaming in horror) when Sarah Palmer ripped out DoucheTruckers throat, so did we shout “I KNEW IT” (while simultaneously bursting into tears) after Diane’s reveal that she had indeed been raped by DoppelCoop. This wasn’t actually news to many, and in particular women. We saw the look on Diane’s face months ago when she first confronted DoppelCoop. Many of us saw ourselves in her taut pain and open sorrow.

Women know. A lot of us know because we have been there personally. And/or we know people who have. Women know.

But over these past couple months I have seen frequent discussions online as if the fact of what Diane survived was still up for debate. Mostly men warped her narrative into some kind of romantic relationship gone wrong; a rejection. Yeah, because women load Diane’s Himalayan-sized mountain of anguish on their backs after a simple break-up. A relationship ends for banal reasons and suddenly we’re an alcoholic rage monster flipping the world a perpetual middle finger. That’s realistic. *Insert world’s biggest eyeroll*

Nobody has such an extreme reaction to the sight of another human being on account of anything less than trauma, and a horrendous one at that.

There are so many levels of sexism we can unpack here along with a whole hell of alot of Richard Horne-level toxic masculinity and narcissistic ego.

Sure, I’ve had my heart broken all over the place. And the men who were decent I look back on fondly even though it didn’t work out. Those kinds of broken hearts heal well. They don’t emotionally cripple you for life. 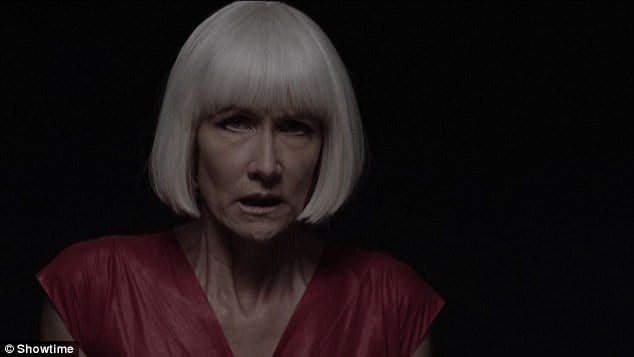 But the males who weren’t decent—those are the ones who make my face contort like Diane’s when I speak about their crimes. Those are the ones who still have the power to reduce me to a pile of tears, suicidal ideation, and self-harming. Those are the monsters that keep me up at night. Those are the creatures that have scarred my body and soul. And there is a big fucking difference between these monstrous criminal assholes and some guy who rejected me decades ago.

There is a special kind of torch that rape survivors carry. You can only see its light if you’ve got one too, or if you have a sensitive and empathic spirit that can see beyond the superficial. Diane’s survivor’s torch was bright bright. Blinding. But because we just can’t have nice things in this world anymore, so many people didn’t see it. I judge every one of them, and harshly.

I make a habit of not making predictions about what’s going to happen in Twin Peaks. But my strong intuition is that DoppelCoop didn’t just rape Diane that night. He murdered her and made a stand-in with her memories intact. This hunch makes my stomach hurt and my heart ache for the fact that we never got to meet Original Diane. That there was once an original, incidentally, is an apt metaphor for life after sexual trauma. You do become someone else after another human being violates your bodily autonomy. And like Diane, many women remain in the grip of their abuser out of fear of future violence. Sometimes you become a shadow of your old self, wasting away. Sometimes you become new simply because the breaks you took made it impossible to put yourself back together the same as you were. The scar tissue becomes the new landscape of your body and psyche.

Even if you survive, you become a tulpa of yourself until you can find ways to re-integrate. Some of us manage it, and some of us don’t. Both options are valid.

And this is why it is so important that we believe women when they tell us things they know are true, especially about rape and sexual violence. We need to remember that women often know these awful things because they have personally been there. The fact that so many of us were doubted after Diane’s first heartwrenching encounter with the man who raped her is also a perfect microcosm of what we experience in real life. The fact that there are still members of the Twin Peaks community actively seeding doubt about what befell Audrey in turn is as disturbing as what we know happened to her.

Why do so many women never press charges against their attackers? Why do we suffer in shame and silence, our lives torn apart by someone else’s crime? Because not being believed is almost worse than the original violation. Because that secondary victimization, the gaslighting, the doubting, the poking holes in our stories and asking what we wore and how much we drank, these are the things that make so many others complicit with the people who hurt us. Because a rapist’s shame transfers to us survivors and victims. And that social paradigm needs to stop.

In the words of Our Lady Diane: Fuck you, Doubters. Fuck you for not listening to us when we shared what we know, not just about Twin Peaks, but in our daily lives too. Fuck your privilege that allowed you to be so callous and dismissive of hundreds, thousands of women in the Twin Peaks community who have similar scars to Diane. Fuck your sexism, your toxic masculinity, your patriarchal womanhood, your bullshit lack of empathy. Fuck you for not believing us. Y’all are part of a huge social problem in this world, and I hope you’ve sat down with yourself and had a good think about why it was so important for you to actively disregard us. Has that disregard carried over into your real life? Who do you know who might be scared to share their trauma with you because you’re an open doubter of rape survivors’ truths? Until you stop, you’re an accomplice to the people who hurt us. Are you okay with that? Really?

To our allies, I thank you for your support.

And to all of you who knew the truth, and especially experientially, I give you a protective hug and send my love. I’m here to listen and believe you if you need it. You’ll find me by the light of my survivor’s torch.