You’re a woman who’s having a bad day — maybe even a bad life — and all you want is a simple drink at the bar and to be left alone. You sip on your cocktail, watching people instead of images on a screen to take your mind off your lot. Maybe you crack open a book or journal to write in as quiet company. But no. Everyone knows that a woman alone in patriarchal society, whether a bar or anywhere, becomes a kind of public property. And especially to a certain kind of man, who assumes that your solo-ness is an open invitation for his advances. He is entitled to your attention whether you want it or not. He doesn’t take no for an answer, no matter how polite you are. And you are so polite to him. You even throw him a small smile that you’re not feeling, because that familiar fear rises in you: Don’t provoke him. They will say it’s all your fault if you do.

But he won’t take a rejection, even a polite one. Your “no” is not a complete sentence to him; it’s just a starting negotiation point.

You have two choices: concede and tolerate him until you finish your drink and leave (and pray to all the gods that he won’t follow you out of the bar) or double down on your “no” (and pray that it doesn’t escalate). Because not only are you a firm “no”, you are also a woman of a certain age who should be thankful for any attention any old truck driver gives you. Your “no” is loaded with the ammunition that strips a certain kind of man of his perceived manhood. Your “no” is not the rejection of a nubile young thing who he knew he never had a chance with. Your “no” emasculates him in a particular way. So he attacks your appearance and taunts you with homophobic slurs. Because you’d have to be a lesbian to turn him down, that’s how confident he is in his masculinity. He threatens to physically harm you if you don’t comply with his unwanted presence. He puts your underlying fear of sexual violence right out in the open. He is grotesquely detailed in the horrible things he’s planning to do until you transmute your “no” to “yes.” He has given these things lots of thought. He is unrelenting.

In real life, women only go alone to bars where we know the bartender and staff, just in case something happens. We ask them to walk us to our transportation after, just in case something happens. We value our alone time but we are constantly vigilant, just in case. Eventually, most of us just stop going alone even though we enjoy a quiet drink with our own company. The last time I did I was sexually harassed so badly I had to call my husband to pick me up from our local tiki bar three blocks away. Now the idea of going out alone is too exhausting—as is the fear and inevitability of harassment. 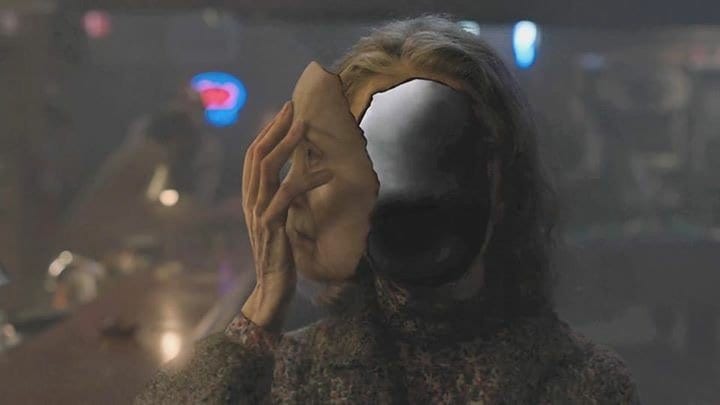 But not Sarah Fucking Palmer. She was polite. She warned the interloper. Then that badass bitch took her face off, asked the douchetrucker “DO YOU REALLY WANT TO FUCK WITH THIS?” And tore out his throat. Women everywhere stood up and cheered for this Kali, Medusa, vagina dentata, avenging angel personified. (While simultaneously screaming in horror). 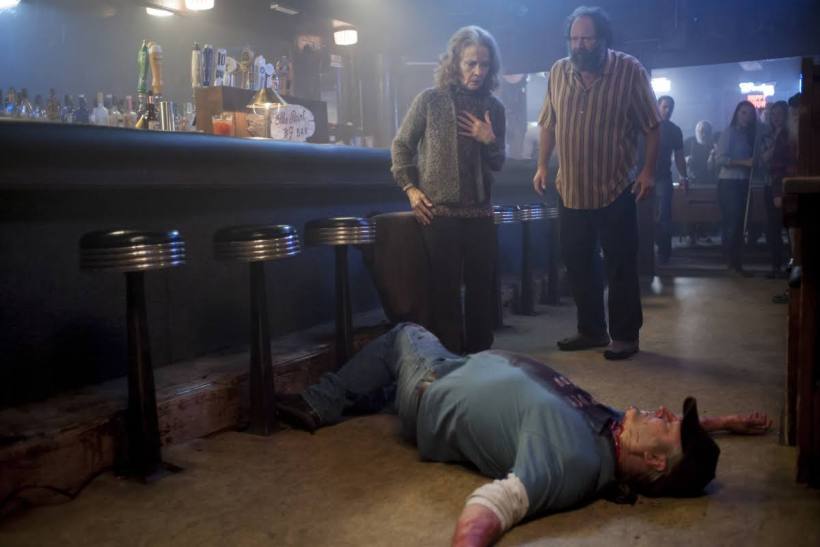 This is not to say that I’m advocating violence, and especially in real life. My wish is for a compassionate world where all human beings treat each other with respect, empathy, and compassion. This is to say that I, along with every other woman on the planet, am simply sick of having to deal with this kind of harassment. Every Single Day. Online. Offline. It Never Ends. It Never Gets Easier.

Because here is the thing: The scariest part of toxic masculinity is how fragile it is. A woman in a bar who won’t give a man attention is all it takes for violence to erupt. A woman who refuses to smile on request gives way to being followed and stalked. A woman who “friendzones” becomes labeled a bitch and tease, because toxic masculinity means that friendship is a slot machine and once a guy has put in enough good deeds the woman owes him a sexual relationship.

Toxic masculinity is not only about entitlement, and neither is it exclusively to sexual access to women’s bodies either. Toxic masculinity is also about protecting that mask of machismo. Consider why men don’t kick each other in the balls. Sociologist Lisa Wade studied this phenomenon and came to the following conclusion in 2015:

When a man hits below the belt, he is revealing to everyone present that masculinity is a fiction.”

In a recent follow-up to this line of inquiry, Wade opened the field to messages she received from many men who agreed with her findings privately. Her informant “Guy” says [sic]:

“Boys usually think of themselves as being tough and we want to be tough and tougher than girls especially. The idea that a girl could hurt a big strong boy like me is ridiculous right. But then I got older and learned about testicles and that girls didn’t have them and i was embarrassed that I had a weak spot and they didn’t.

Your only as strong as your weakest link and guys have the weakest link on the body. I hate knowing this and I’m afraid women realize this and I think a lot of guys feel the same even if they don’t admit it.”

“What would street fights between guys look like—or professional fights for that matter—if one could go below the belt? For one, there’d be a lot more collapsing. Two, a lot more writhing in pain. Three, a lot less getting up. All in all, it would add up to less time looking powerful and more time looking pitiful. And it would send a clear message that men’s bodies are vulnerable.”

Why else would the leadership of Bad Cooper’s new gang be determined by an arm wrestling match instead of a fistfight? There is no risk of hand or foot to balls contact when all that’s in play is one elbow on the table in starting position. Such poignant irony, really, that a group of violent hardasses would all have this one fear of being exposed in common.

And what would it look like if we saw more women on screen physically fighting back against toxic masculinity, even if in metaphorical form like Sarah Palmer? Would there be real-life implications that empower women to defend themselves? Would it help if men felt even a little bit of the kind of fear women do when being approached by male strangers? Could toxic masculinity bearers finally let the myth of their impenetrability go? Maybe not all the way, but it would be a good start towards dismantling these archaic patriarchal structures that trap both men and women in absurd cycles of gender performativity.

Until then, I’ll just be over here watching Sarah Palmer’s bar brawl on a loop. She’s the new Furiosa.

P.S. If you enjoyed the feminist carnivalesque script-flip of Sarah’s bar fight, you might appreciate my novels American Monsters and Crime Rave. Not only is there an overt homage to Twin Peaks and Sarah herself, the entire premise is about women flipping the tables on male violence.