Times have always been troubled in America–but they seem particularly so as of late. Hate and violence seem to stalk us, largely because of our (perhaps willful) refusal to confront the demons of our own national past. Now would seem to be a good time for a fully empowered FBI Special Agent Dale Cooper (Kyle MacLachlan) to remind us of what it means to be good and decent and humane with one another.

And yet, even Cooper has a dark past, one that he often attempts to cover over with a deliberate, even forced, dedication to goodness. Cooper, in fact, is a character who has always walked a tense tightrope of compelling heroism and moral rectitude that is, ironically, constantly threatening to spill over into an outright parody of compelling heroism and moral rectitude. He is, in other words, the poster child of lovably ridiculous perfection–a fact that makes his Season 2 finale possession by malignant spirit BOB all the more horrific and tragic. For viewers who have viewed Cooper’s ridiculous perfection in Twin Peaks as a kind of satirical, tongue-in-cheek game up to that point, the stakes suddenly become very high and very real. Cooper’s heart-warming, if sometimes laughable, integrity and morality are gone at that point, we assume, replaced instead by an evil presence that feeds on–and acts upon the impulses of–the lesser angels of his nature.

What makes Cooper so universally beloved in the first season of Twin Peaks (1990)? His essential goodness holds great appeal for us, to be sure, as does his proclivity for metaphysical methods of intuition. We respond on a gut level to his uninhibited passions for the simplest pleasures of life (e.g., “This is, excuse me, a damn fine cup of coffee,” or, “This must be where pies go when they die….”), each of which brings a wide and mischievous–but, we sense, harmless and purely honest–smile to his face. We also admire his old-fashioned (even outdated) professionalism, a dedication to higher principles that transcends both petty bureaucracy and a fallen, cynical world. Additionally, he is, of course, “tall, dark, and handsome,” while managing, at the same time, to be strangely (if charmingly) square–not unlike an over-aged, supermodel Boy Scout. In short, Season 1 Cooper is too good to be true; and yet, there he is–ridiculously perfect–and we love him. 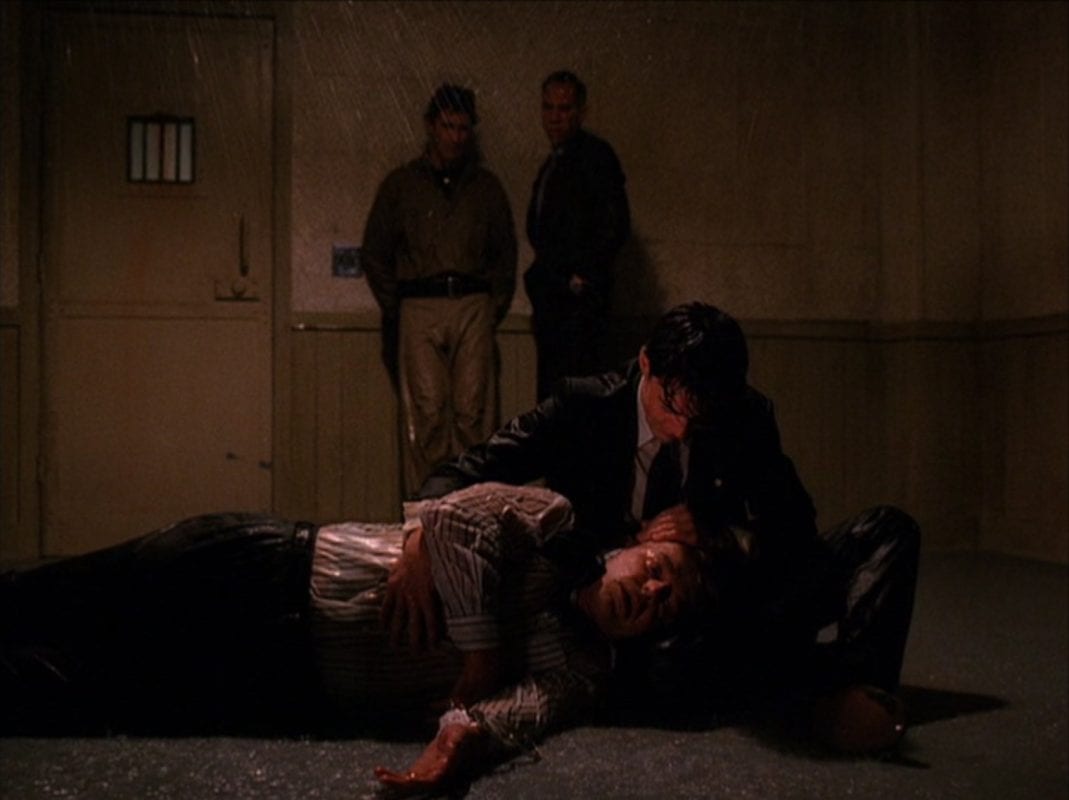 Season 2 of Twin Peaks (1990-91) complicates this image of Cooper considerably. We learn of his dark history with former partner Windom Earle (Kenneth Welsh) and of Cooper’s ill-advised love affair with Caroline, Earle’s wife. Cooper’s unfortunate lapse in moral and ethical judgement results in Caroline’s murder and Earle’s insanity, tragedies that color Cooper’s past and, certainly, shape his present. Given these gradual revelations over the course of Season 2, we begin to see Cooper deepen as a character, his vulnerabilities and regrets even helping to explain his sympathy for the depraved Leland Palmer (Ray Wise), who, while possessed by BOB (Frank Silva), has committed atrocious acts, including the rape and murder of his own daughter, Laura (Sheryl Lee). Recall that Season 2 Cooper goes so far as to cradle the dying Leland in his lap in a kind of classical pose that echoes the Virgin Mary’s cradling of Christ’s corpse in Michelangelo’s famous 1499 sculpture, Pietá. At this moment and in many others, Cooper’s capacity for compassion subdues, even overcomes, the darker angels of his nature, and he seeks solace from his past sins through courageous service to others. In this way, he becomes even more ridiculously perfect in our eyes–a man whose continual search for redemption aids those in need.

While mid-Season 2 features Cooper solving Laura’s murder, it also presents our FBI man with a number of new stumbling blocks. An FBI Internal Affairs investigation begins involving Cooper’s activities in Canada, and he is forced to surrender both his weapon and his badge. In addition, Earle, Cooper’s murderous Moriarty-esque nemesis, re-emerges in Twin Peaks, setting in motion a sick game of cat-and-mouse serial killings that darken Cooper’s mood and, indeed, that of the series at large. Late Season 2, however, finds Cooper rejuvenated. His FBI status is reinstated, and he trades in his flannel lumberjack shirt in order to once again don his trademark black suit. We see Cooper in love, positioned for the first time in the series as a romantic figure with all the warmth, generosity, and human understanding we have come to expect from his character over the past two seasons. In many ways, these late Season 2 episodes seem like a collective return to Season 1 form–a kind of last foray into cherry-pie nostalgia before the show’s dark descent into the Black Lodge. Cooper smiles widely, gestures thumbs-up to Gordon Cole (David Lynch) repeatedly, and expresses frequently his sense of wonder about the world. In short, Cooper becomes, once again, lovable in his ridiculous perfection–all the more so, in fact, because of his dedication to overcoming a dark stain from his past. Unfortunately, the Season 2 finale finds the righteous Cooper trapped in the Black Lodge when BOB takes possession of his worldly vessel for the next 25 years (think of the promised time, described in Revelations 20:7, during which Satan is to be loosed from bondage for 1,000 years). Thus, the show ends on a note of extreme complication for Cooper’s otherwise ridiculously perfect character.

And now, with Season 3, “it is happening again.”

Twin Peaks: The Return is, in many ways, the logical extension of the original show’s exploration of Cooper’s almost unrealistic goodness–which is, by extension, an exploration of humanity at large and our ability to privilege our own capacity for good over our overwhelming capacity for evil. At the end of Season 2, we are left with desperate, chilling questions: If even Cooper is susceptible to his own worst nature (and, therefore, the possessive influences of BOB), how can the all-too-human rest of us possibly hope to overcome the evil within ourselves? Or the evil that surrounds us? Such questions seem all the more pressing today given the rise of unabashed hate and evil in our own world (and yes, I’m thinking specifically of the racist neo-Nazi events in Charlottesville, Virginia, and the tragedies that have ensued from that gathering).

Season 3 continues to contemplate these questions. As the Bickering Peaks podcast has asserted, Cooper’s post-Black Lodge manifestation in the form of “Dougie” Jones reveals Cooper’s standalone goodness to be a kind of tabula rasa innocence that nevertheless influences all who encounter him for the better: the raggedy-gambler woman (aka, the “Lady Slot-Addict”) in the Silver Mustang Casino (Linda Porter); Janey-E (Naomi Watts) and Sonny Jim (Pierce Gagnon); Bushnell Mullins (Don Murray); the Mitchum brothers (Robert Knepper and Jim Belushi); and, presumably (although we have yet to see as of this writing), Candie (Amy Shiels) and Anthony Sinclair (Tom Sizemore). In other words, “Dougie-Coop” serves as a walking bubble of good will and charity that acts not according to reason or intention, but rather according to an inherent nature that can’t help but improve on all things within its sphere of influence. We won’t be surprised, in fact, if we see wilting flowers rebound to blooming life as Dougie-Coop passes. 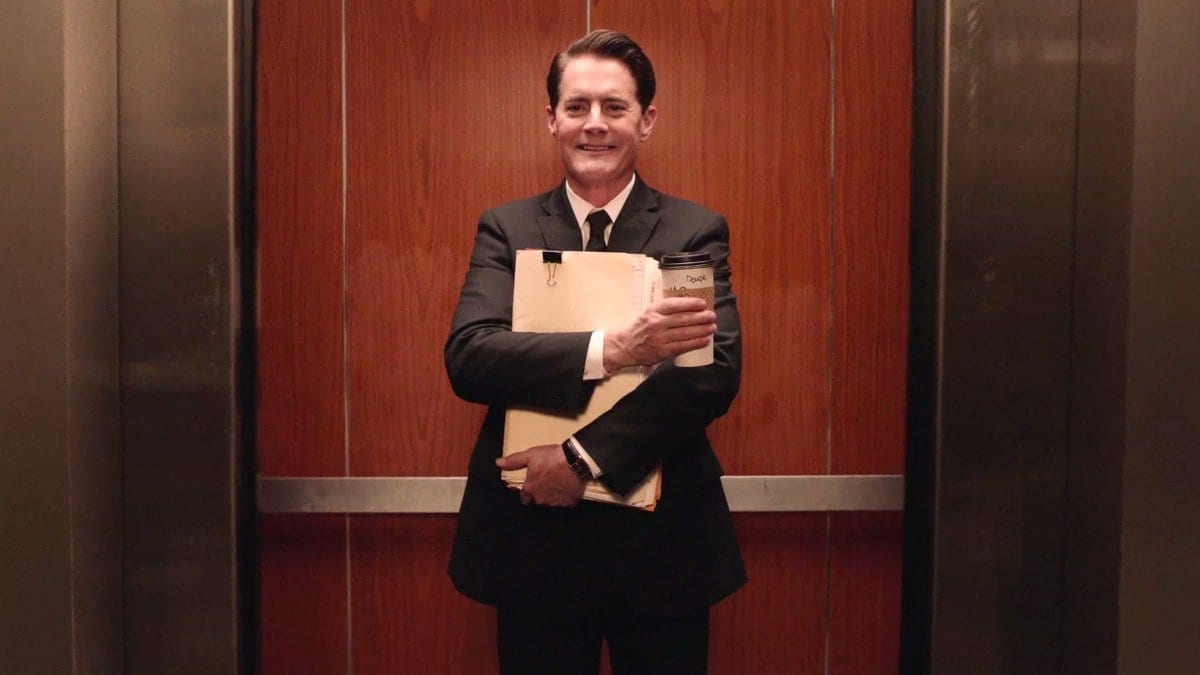 This uninhibited goodness even takes physical form.  Throughout Season 3, Dougie-Coop is flawless in appearance, with his supremely coiffed hair and his tailored black suit (minus, of course, his few scenes in Dougie’s lime-green sports coat). When Dougie-Coop removes his shirt for a doctor’s examination, his overly impressive physique and ripped abs can’t help but serve as guffaw-inducing markers of his boundless perfection. (During this scene, I sensed, too, a kind of extra-textual but good-natured jab at MacLachlan’s own physical perfection–as if Lynch/Frost couldn’t help ribbing the actor for his famously slim but fit build.)

Of course, Dougie-Coop’s other half, the so-called Doppel-Coop (a.k.a., “Mr. C”), must be discussed through two different lenses–one that recognizes that he has been possessed by BOB for, presumably, the last 25 years, and another that takes note of the fact that BOB seems to have been removed from Doppel-Coop’s body in Part 8 of The Return.  Although we can assume Doppel-Coop has been up to no good for the last quarter century, he nevertheless seems far removed from the Joker-grinning, “How’s-Annie?” mania that seems to characterize his persona at the end of Season 2. If anything, I think we expected Doppel-Coop to chew boatloads of scenery as a sniveling, two-faced villain (in the tradition of Season 2 Leland Palmer). Instead, Doppel-Coop displays a remarkable sense of calm, control, and intensity–even in the early parts of Season 3, during which he remains possessed by BOB. In fact, the “charm” of Doppel-Coop’s scenes stems largely from our admiration and anticipation of his commanding aura of control. His arm-wrestling scene in Part 13 stands as a case in point. As the Bickering Peaks podcast so astutely observes, although Doppel-Coop finds himself in what appears to be in a hopeless situation in this threatening sequence, we feel fascinated not with whether Doppel-Coop will overcome his opponent, but how–and when. He toys with his hulking competitor, pushing and pulling the brute’s muscled arm back and forth effortlessly and at will. (Doppel-Coop’s line, “I like it better over here, don’t you?” when he pushes his opponent’s hand almost to the top of the table is forever seared into my memory.  It’s enough to make me want to break out in my own rendition of Kenny Loggins’s “Meet Me Half Way.”)

So what happened to the manic, BOB-possessed Doppel-Coop of Season 2’s finale?  Even when BOB is seemingly “removed” from Doppel-Coop’s body in Part 8, we see no significant difference in Doppel-Coop’s demeanor or behavior. Could it be that Doppel-Coop, over the past 25 years, has somehow managed to subdue–even, to a degree, subordinate–BOB to his own will (an act that is reminiscent of Laura’s defeat of BOB in 1992’s Fire Walk With Me)? And is Doppel-Coop now, sans BOB, seeking to reconnect with Dougie-Coop at the Twin Peaks coordinates, where the two halves of FBI Special Agent Dale Cooper–the passive, pleasant innocent and the world-weary, supremely competent controller–will once again be made whole?  The rest of The Return will, hopefully, tell us–and Mark Frost’s forthcoming book, Twin Peaks: The Final Dossier (slated for release on October 31, 2017), will–again, hopefully–supplement any answers provided by The Return.

The larger point to note, however, is that Cooper’s journey, from the pilot to the present, has been one of self-discovery–one wherein he will ultimately have to reconcile himself to the darker side of both himself and his past. During these troubled times in our own world–as evil stands unashamed in the highest halls of power, in our own communities, and, perhaps, even in ourselves–all of us are being asked to undertake this same journey to confront an evil past. Will we overcome our worst instincts as a nation and as individuals and rally the courage to undertake this journey? Time–and personal dedications to acting for positive change–will tell.