Throughout the course of Twin Peaks, Sheryl Lee has created three distinct characters that feel nothing like each other, and yet she rarely gets full appreciation for this accomplishment. Having had the great fortune of taking a 4-week intensive writing/directing/acting workshop with Sheryl and Gary Hershberger (https://www.theactorsdirectorworkshop.com/), I can attest to the fact that in reality, Sheryl is unlike any of her characters in Twin Peaks: she’s gentler than Laura Palmer, more decisive than Maddy Ferguson, and more serene than Carrie Page. More than anything, Sheryl radiates warmth, humility, and grace. Unless she’s focused on work, she’s usually smiling or laughing. In short, you’re watching three masterful performances fascinating in their subtleties and specificities, and in this article, we’ll analyze each of them in more detail.

During the workshop, Sheryl and Gary defined acting as “living truthfully, moment to moment, under imaginary circumstances, and filling up that world with imagination to be as specific as possible.” In the first two seasons of Twin Peaks, Laura Palmer is less of a dramatic subject, and more of an object of mystery. And with just one raised eyebrow, Sheryl creates unknowable mystique, immediately drawing us in. We learn about her only from other people’s memories, thoughts, and feelings. For example, in James’ memory of Laura giving him half of the heart necklace, she is impossibly saccharine, speaking in an artificially sweetened voice. This is the same voice Sheryl uses for Laura while recording Jacoby’s tapes—it’s a voice meant to suggest childish innocence, hence the great contrast of this affected voice talking about men and masochistic sexual pleasures. It also serves as a subtextual reminder that despite Laura’s corruption, she is still a child. In the series, she is an enigma, one that leaves others dreaming and wondering, but less so a character and more of a myth.

We all heard the story of how David Lynch was so taken with Sheryl Lee that he and Mark Frost created a whole new character for her to play, that of Laura’s doomed cousin Madeline Ferguson. And it’s not just the dark hair or the glasses, but her body language and behavior that give Maddy a different quality from Laura. She feels less confident, more awkward and self-conscious than Laura, and while watching her, it’s easy to forget the same actress plays both parts. Sheryl uses subtle things to create that character, like more tentative physical movements and gestures, or voice modulation in the scene where Maddy calls Dr. Jacoby: from Laura’s contrived sweetness to her Maddy voice, which is deeper and lower. Or in the scene of Maddy meeting James at RR, she delivers almost her entire dialogue with a glint in her eyes and a wide-eyed smile, even when describing the gloomy atmosphere in the Palmer household. Interestingly, Maddy’s storyline takes her from innocence to corruption, symbolized by her breaking of her glasses, and back to innocence but one with a more mature, self-assured shading in her goodbye scene with James. When Maddy acts more like Laura (seducing James, helping Donna with Harold), she appears somewhat ill at ease, and there remains a softness about her that Laura can emulate only for an effect, like her honeyed vocal delivery. Maddy is intrigued by playing with fire, but unable to deal with the consequences (e.g., looking away when Harold hurts himself.)

Laura Palmer in Fire Walk With Me

When it comes to Fire Walk With Me, it can easily be argued that Sheryl Lee portrays several characters in the film: the Madonna and the whore, the child and the adult, the victim and the victimizer, sometimes several at once. Underlying each of them is the actress’s empathy: in class, Sheryl talked about always approaching a character with compassion, even at their worst, even when they are completely different from you. Her performance in the film feels more mature and lived-in than her work in the original series, and Sheryl went through extraordinary steps to bring this role to life in order to reach the emotional extremes required by the story. In his Lynch biography Beautiful Dark, Greg Olson writes about filming the scene after Laura and Leland’s traffic jam nightmare with Mike: “Lee surprises us all by screaming loudly a few times just before the first take rolls” making Lynch look “thrilled by her heartfelt participation in the project.” In the scene, Laura and Leland speak of seemingly innocuous things, but deliver their lines with unexpected force and conviction, as if their lives depended on them. The lines and delivery are incongruous because they’re dancing around the truth (that Leland is Laura’s abuser.) During the workshop, Sheryl talked about using buried feelings as a subtext – it could be something that the character wants, or really thinks, or doesn’t want the other person to know; that subtext gives an actor a need that he/she can latch onto.

On the other end of the spectrum, though FWWM is often criticized for its perceived lack of humor, there are comedic moments in Sheryl’s performance that resonated with audiences during 2017 anniversary screenings in LA. For example, Sheryl’s deadpan delivery of “Life is full of mysteries, Donna” or the scene in which she gets ready to meet James (“God, why did I say that? 15 minutes?!”) elicited noticeable laughter from the audience. Note how Sheryl uses her body, “her instrument” as she would say, while struggling with the phone receiver, or putting on her stockings, to deliver a bout of physical comedy that becomes an unexpected counterpoint in the moment of Laura’s great tragedy. 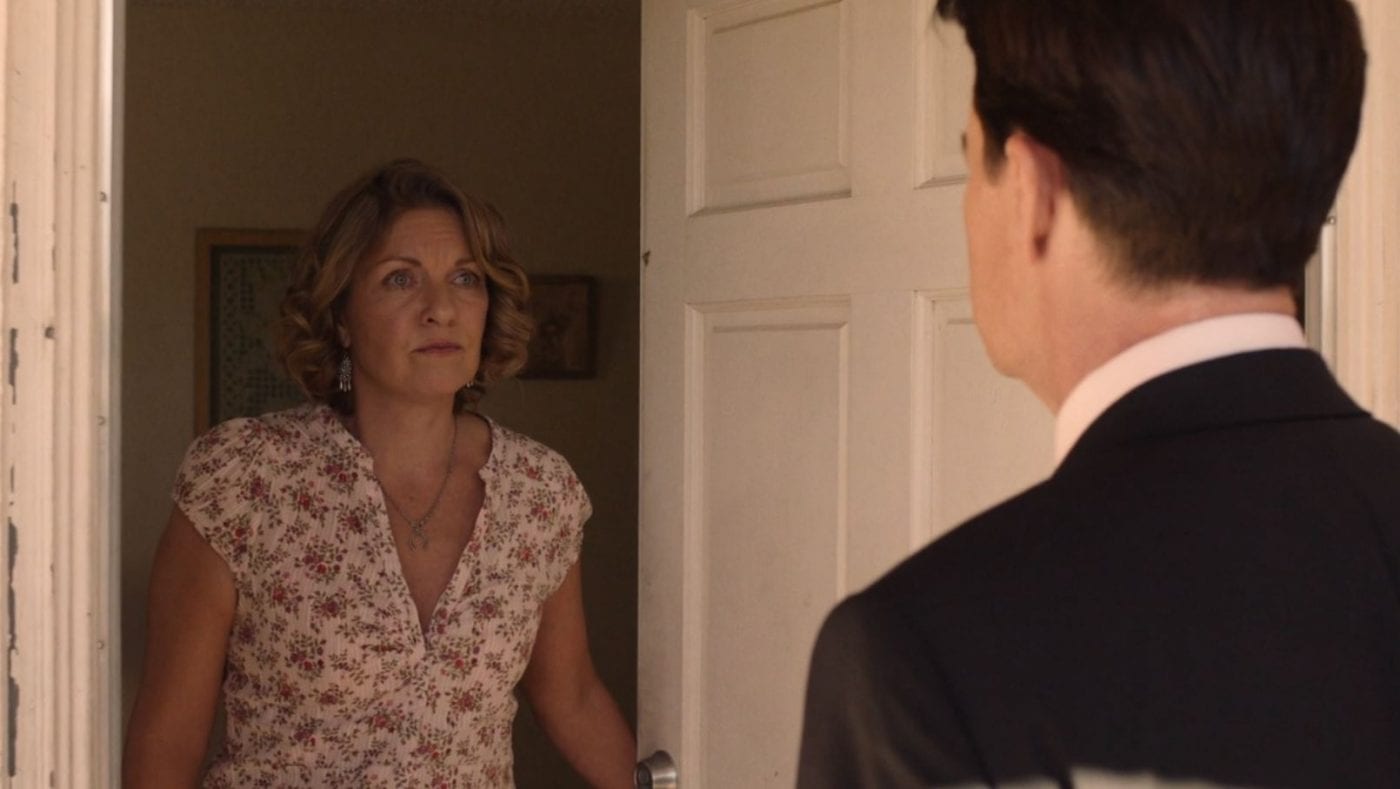 Carrie in Twin Peaks: The Return

While we’re on the topic of comedy, during the workshop, Sheryl joked how people never hire her for comedic roles because she isn’t funny. But to anyone who sees her as Carrie when Cooper/Richard arrives at her door in Odessa, her credible Texan accent, slouched stance, and clumsy rush to get out the door prove otherwise. Pay attention to her facial expressions when she’s talking to Richard at the door: there’s a whole range of emotions bubbling just underneath the surface, a mixture of hope, confusion, aggravation, impatience, and need. That is what “living truthfully moment to moment under imaginary circumstances” looks and feels like. Observe how her chirpy, excited disposition provides a sharp contrast to her casual indifference to the dead body in the living room and the insistent ringing of the phone, adding a level of absurd humor to the scene. And then how the way she straightens her body and perks up when Cooper solves the food crisis adds peculiar levity to gruesome circumstances, punctuated with her resounding, “Awright! Lessgo!” When I pointed out to Sheryl how funny she was in this scene, she explained her not being funny was an inside joke with her agent/manager. She told me David is the one director who recognizes her sense of humor, and knows how to bring it out of her. Once again, Carrie feels nothing like Laura, and this is purposeful, as we are meant to question whether Carrie really is Laura, and could Cooper/Richard be wrong about her. As their journey continues, Carrie’s words and reactions decelerate, losing that frantic energy, until in the last scene, Carrie acts as if in a dream. Is she the dreamer? (For further reading, please check out my article that was given a personal stamp of approval from Sheryl herself: https://25yearslatersite.com/2017/10/15/the-scream-of-empowerment/)

When asked about working with Lynch during a class, Sheryl emphasized their trust built over time. If you notice on Blu-ray special features in the Red Room, Sheryl does whatever David asks of her, without complaint or challenge. And it is that trust between them that makes her feel free and comfortable. Witnessing Sheryl at work during our workshop made me gain a deeper appreciation for her craft, and how easy and effortless she makes it seem (from acting in a few scenes in class, I can affirm that acting is incredibly intimate, delicate work requiring intense commitment and focus). As much as we rightfully celebrate Kyle McLachlan for the range of characters he portrayed in Season 3, let’s not forget to also celebrate Sheryl Lee, whose many faces and characters have lit up the world of Twin Peaks since its very beginning.