I recently had the opportunity to speak with Mary Reber who played Alice Tremond in the final scene of the third season of Twin Peaks. In addition to her role on the show, Mary and her family are actually the owners of the Palmer home! Many thanks to Mary to taking the time to speak with me and I hope you enjoy the interview!

AG: How long have you and your family lived in the Palmer home?

AG: Did you know how significant the house was to Twin Peaks fans when you bought the house?

MR: We did know just from seeing Twin Peaks but we didn’t purchase the home because of Twin Peaks. We just thought the area would be a great place to buy a home. It’s actually our first home and it’s a really nice area. I did know it was the Palmer home though. Before us, the house was owned by a lady who was 81 or 82 years old who was here originally when it was filmed. It was pretty run down and needed a lot of work. We walked away from it at first and thought it might not be worth it, but my husband said he thought he could do quite a bit of the work himself, which he did. I can’t even imagine living anywhere else. Besides it being the Palmer home, I just love this place. It’s a really neat home, and we’re really happy here. 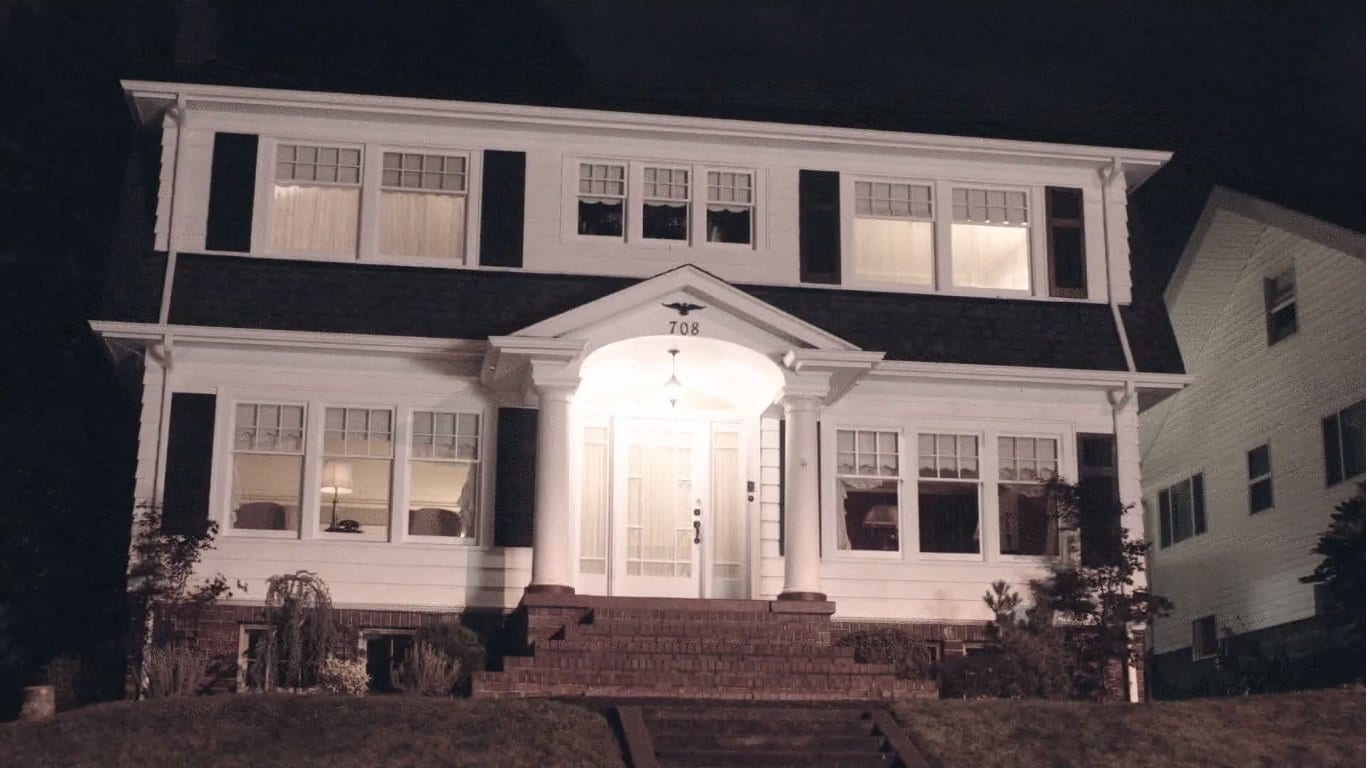 AG: You moved into the home during a pretty exciting time period for Twin Peaks fans. Did fans start interacting with you right away?

MR: There were still fans that were coming around from 25 years ago. The lady who lived here before didn’t allow people in the home. People would still come by and take pictures and such and they were pretty respectful. When we moved in, it was only a few months later, November I think when we had a notice on the door saying they wanted to film here. They didn’t say it was Twin Peaks, but we had a pretty good idea. It was just a note from the location manager asking for us to get ahold of them and they wanted to film. We were out when he stopped by, so he left a note. We called him right away, and he came over that night or the next day and talked to us about it. He said he couldn’t tell us what it was, but we had a pretty good idea.

AG: How long from that point until they filmed in your home?

MR: The note was on our door in November, and then on New Years Day, David Lynch, Sabrina Sutherland and a couple of other people stopped by while they were out seeing what locations would still work for them. The filming was in October of 2015. Only David Lynch would show up on New Years Day (laughs). All we had heard prior was that a director was coming from California and I didn’t think he would come himself. I figured he would send somebody, but as soon as he got out of the car I was like “Whoa, he’s here”.

AG: When did discussions start about you having a role in the show?

MR: They were probably here four times, all together with different people from different departments. It was the second time that Lynch was here that my husband saw him watching me as I was talking to people and stuff. That was probably March or April of 2015. I was in the kitchen by myself, and David walked in and asked me if I was an actress. I told him no. He asked me if I had ever acted in anything before and I told him not at all. He asked me if I would like a small part in the film and I said absolutely. He said the only thing I’m going to tell you now is to act natural and you’ll be in your own home. He did say it wasn’t for sure, but then I never heard anything else until I got the script.

AG: They filmed several scenes in your home. What was it like having the cast and crew in your home, filming?

MR: We were allowed to stay in our home, which was neat. They filmed October 7th Sarah’s scenes and Hawk’s scene. Then the finale, which we obviously didn’t know was the finale was filmed on the 9th, which was a Friday night. The crew was incredible, such a nice group of people. David Lynch said to us that this was our home and we could stay here but asked that we make sure that we stay clear of people doing what they needed to do.

AG: What was it like observing filming? You had seen the original series and now here you are watching the filming of new material long before anyone else would see it and it’s in your home?

MR: Absolutely incredible. It was one of the greatest experiences watching everyone do their work. They were such professionals, and from the painters to the people doing the lighting, it was all just such fun to watch.

AG: When it comes time for you to film your scene, what was that process like? Did it take a while to film or was it pretty to the point?

MR: It was really cool. They filmed Cooper and Carrie walking up the steps numerous times. Then it was my time for me to do my scene and it only took two takes thank goodness [laughs]. He only had to tweak a few things, which was good. Kyle MacLachlan and Sheryl Lee can make anyone look good though, you know? 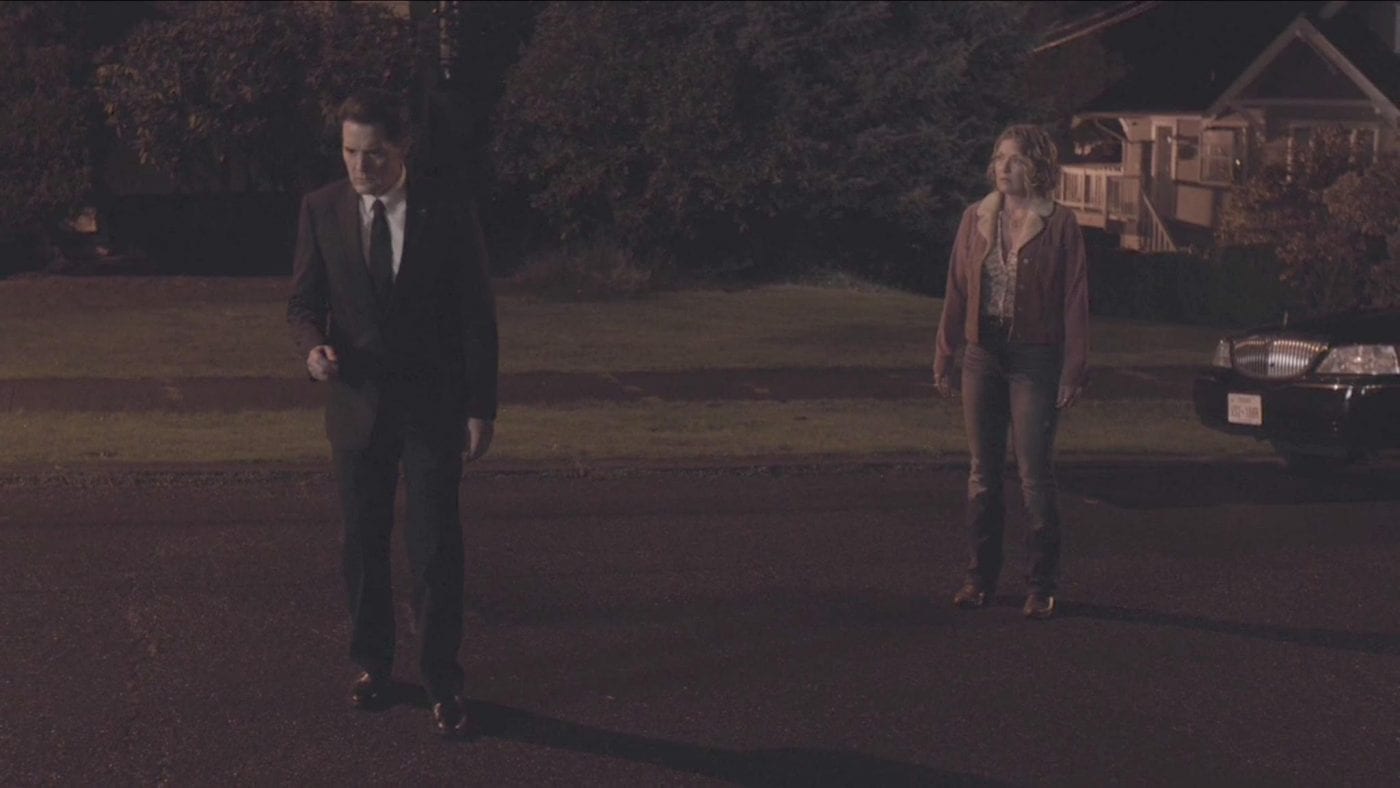 MR: Having Kyle MacLachlan and Sheryl Lee at the front door was incredible, a really neat experience. They were both really nice. In the makeup trailer, we were able to communicate a little while we were getting our hair and makeup ready. It made me feel like I knew them a little bit, so it made the scene easier for me when they came to the door.

AG: What was it like for you being directed by David? He went from being a visitor in your home months earlier to now directing you in a scene?

MR: There wasn’t a lot of difference. He’s just a super nice guy. I think the thing I like about David Lynch and his directing method is that he wants you to be relaxed. He probably knew I was going to be nervous and he lets people get in the mood, run their lines, and if it works, it works. It was more natural that way than him telling me exactly what to sound like and what to do. He only had to tweak a couple of things, and it was a neat way of directing I think.

AG: Throughout the series, you were very engaged with fans, including having people over to watch the show in your home. What was it like for you interacting with people and knowing you were a part of the show, but you couldn’t say anything?

AG: Did you have any inclination that you wouldn’t be appearing until the end?

MR: No. It wasn’t until I didn’t appear in Part 17 that I knew I would be in the finale [laughs]. I had no idea it would be the last scene. Then during the driving scene from Odessa to Twin Peaks, I thought, oh gosh there’s only a few minutes left.

AG: What was that like for your family, you appearing in the final moments of the finale?

MR: My husband and I watched the East Coast feed first together, and then our kids come over. Our kids like Twin Peaks a lot, and it was our son who introduced us to it. I was raising little kids like you are now when the show first came out, and I didn’t watch it until a few years after it had come out. I’ve seen the series 3 or 4 times now.

AG: I imagine that had to be quite the experience when your kids saw you in the show’s final moments onscreen.

MR: Oh yeah, absolutely. They knew they were here filming obviously. They were part of the 250, 300 people here for the night shoot. Actually, when Cooper is looking up, off to his right there would have been about 250, 300 people and I don’t know how they edited all of them out [laughs]. Kyle actually went out and talked to all of them that night, too, which was really cool.

AG: So afterwards, your secret is out. Everyone knows you were part of the shocking twist. What was that night like for you?

MR: It was crazy. Our kids were here, and a few of our friends. I just never knew what all this would entail, so to me, it was just super exciting. It was also kind of humbling. When you film a scene like that, and you’ve never done anything like that before you’re always a little nervous about how it’s going to come across. I just thought it was an incredible ending to the finale.

AG: Absolutely. I sat in my living room with my jaw dropped.

MR: I think everyone’s jaw dropped. I think everyone has a process and that’s what I like about David’s work. It’s not mindless TV and people are still talking about it. 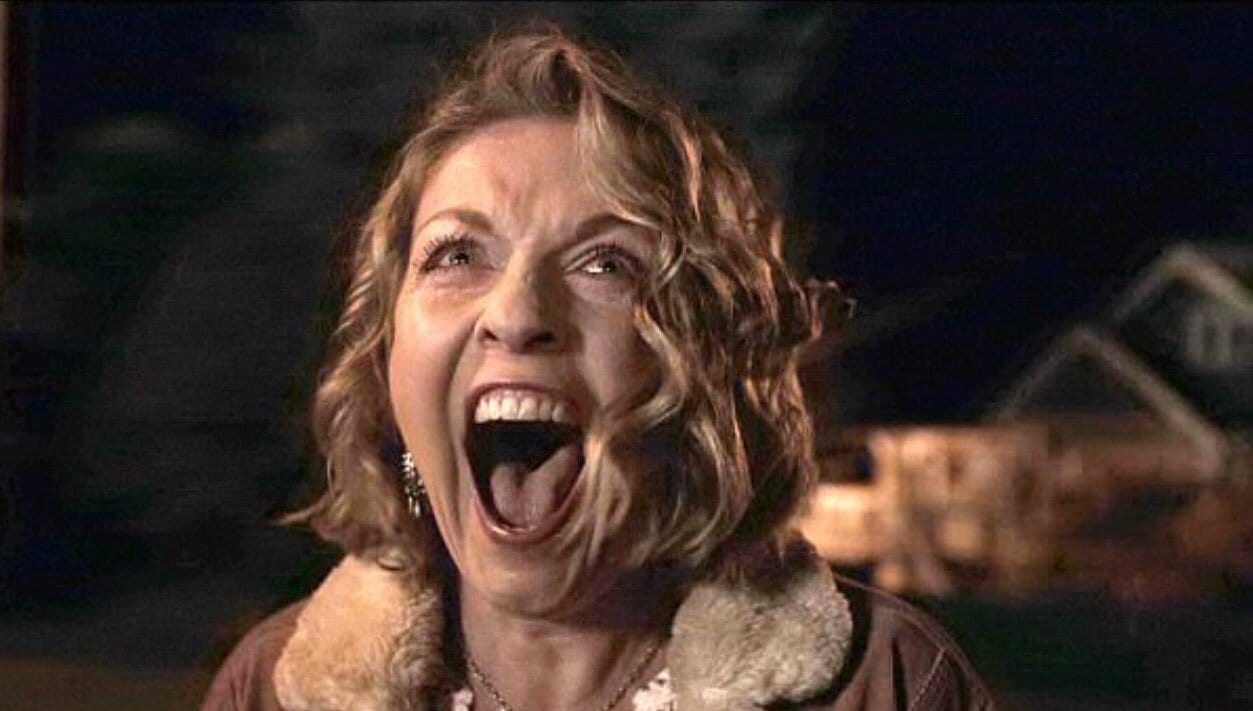 MR: I love your site and I’m not just saying that because you’re interviewing me. You guys really have some thought-provoking articles and some really interesting writers on your website.

AG: I really appreciate that. I have an amazing team. Are you planning on going to the Twin Peaks Festival this year?

MR: I wouldn’t mind doing that and also I would love to go to the UK Festival. I would love to travel. If I’m invited to the US Festival, I would love that, and if not I’ll show up for some of the events. It’s really a great time.

AG: Is this the beginning of an acting career for you?

MR: I don’t know. Nobody knows if there’s going to be a Season 4 or not. Let’s put it this way: I had a really good time with this as an incredible one-shot thing for me.

AG: I really appreciate you taking the time to talk to me. Anything you would like to say in conclusion about this experience or other final thoughts?

MR: I was really blown away by the kindness and professionalism of the group and the experience itself. It was a real honor for me to work with David and Sabrina and to have Kyle and Sheryl here. They’re all really great people. I couldn’t have asked for anything more.

If you enjoyed this interview, please be sure to check out some of our others:

My Interview With Sabrina Sutherland

My Interview with Mark Frost

My Interview With James Grixoni