I recently had the pleasure of speaking with Anthony Marcacci who appeared in two episodes of The Return as a Woodsman. In the interview we got to discuss what it was like working with his favourite director, David Lynch, being a lifelong Twin Peaks fan and what it was like appearing in Part 8. I hope you enjoy the interview.

MH: Thank you Anthony for joining us here at 25YL. How did you learn about the role in Twin Peaks and what was the casting process like?

AM: I was in a beard club called the Emerald City Beardos and somebody posted a casting call on their Facebook group looking for guys with large beards. It didn’t say what the project was and beards were very trendy at the time so it could have been for anything at all. A bunch of us applied, sent headshots and then didn’t really think anything else about it. A week or two later the casting agent sent something saying me (and a couple of my friends) had been chosen and that we need to meet at a certain location for costume fittings….. but they still wouldn’t tell us what it was. We didn’t know we were going to be in Twin Peaks until we rolled up on set for costume & make up tests, then we saw all the Twin Peaks Sheriff trucks.

MH: Were you already a Peaks fan before getting the role or was it something you had to research into first?

AM: I’ve been a huge TP fan since the original came out, I have all the books, I’ve seen every episode and Fire Walk With Me countless times now. Like I said, we didn’t even know what we were doing until we showed up so luckily I didn’t need to do any research at all.

MH: What were you told about your character of ‘Woodsman’?

AM: We were told very, very little. We didn’t even know what the characters were until we were on set and someone referred to us as The Woodsmen. Once we saw the costumes, I knew we were dressed like the two characters in FWWM but I didn’t know for sure how closely we were supposed to be related to them, if at all.

MH: Tell us about your first day on set and what the make up process was like.

AM: First day on set was costume fitting and make up tests. We tried on our costumes and then they pulled me and my buddy Liam into the makeup trailer while everyone else went home. They did the Woodsman makeup for the very first time on us and it took hours. Then they walked us over to another building and we were stood there waiting for something to happen. Eventually, David Lynch came out, took a look at us and then took a paint brush and goes “More like this!” and painted black paint all over both of our faces.

MH: Wow, so you got to work really closely with David Lynch, what was that experience like?

AM: He personally directed all of our scenes and interacted with each of us explaining how he wanted us to walk and move around. It was pretty surreal hearing David Lynch yell, “Where’s Tony? We need Tony over here!” when I filmed my scenes with Kyle. For a brief moment, my favourite director knew who I was…or at least knew my name. He was very focussed and a little intense but very nice. We were shooting our scenes on the very last two days of shooting in Seattle before they packed up and went to shoot in California and it was very late at night so everyone was kind of tired but they were all having a blast…yet nobody knew what was really going on. 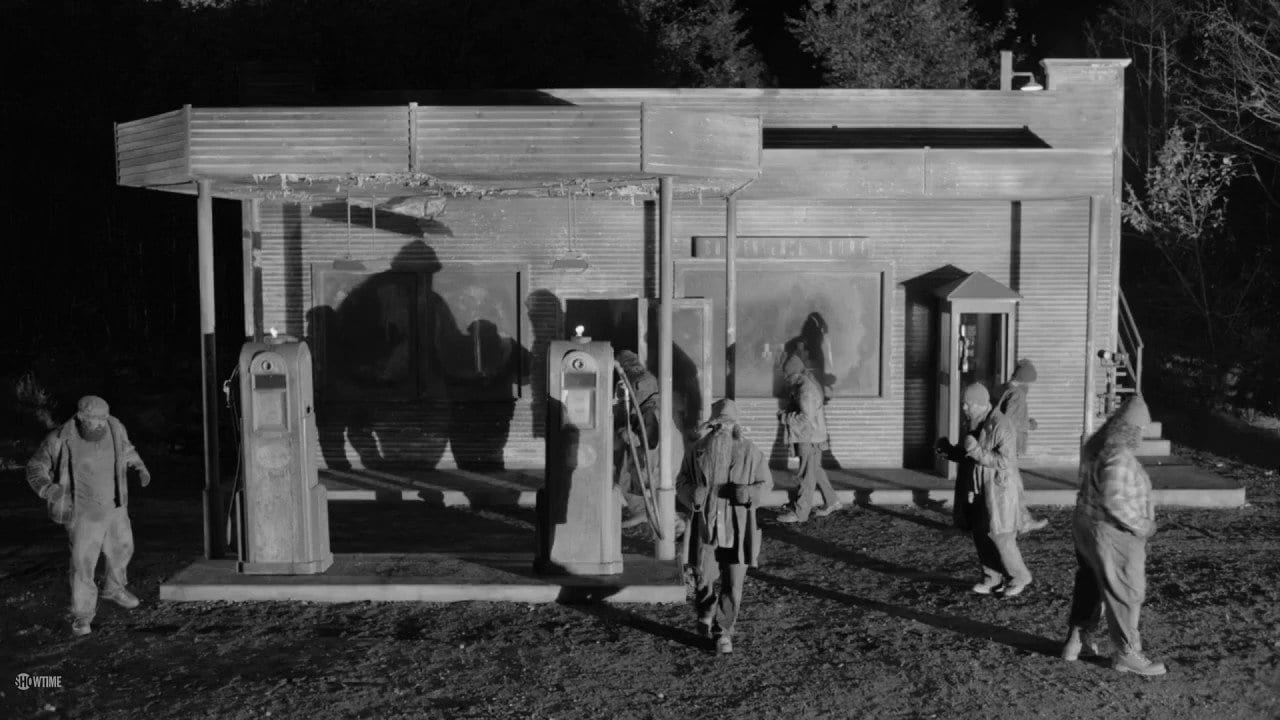 MH: You were involved with the scene in Part 8, set outside the Convenience Store where we see ‘The Woodsmen’ erratically move around the screen, how was the context of that scene described to you?

AM: It really wasn’t described at all. There was never any context given for anything that we did and I honestly didn’t think that stuff would even make the show because it seemed so weird compared to a lot of the stuff in the original two seasons. Now that I’ve seen season 3, it all makes sense. Kind of.

MH: What direction were you being given for the scene and how was it being shot?

AM: David basically told us to move and what kind of patterns to make with our movements, then we shot a tonne of takes. There aren’t actually that many of us in that scene at all, it’s all camera tricks. We actually shot a lot inside the store too but that didn’t really get used.

MH: How do you feel watching that scene back now knowing that it’s such a huge, game changing episode of TV?

AM: It blows my mind every time I think about it. It’s such a cool episode and unlike anything I’ve ever seen on TV, so just as a huge fan it’s amazing. Then to think that I’m actually in it, even as a small part, is insane. I think that episode will be analysed for years and years.

MH: Your next scene involved you greeting ‘Mr C’ outside the Convenience Store and leading him to Jeffries motel room, what was it like getting to work so closely with Kyle MacLachlan?

AM: Kyle was awesome. We talked a bit before hand and once we did our first take of us walking up the stairs he leaned over and said “Welcome to show business!” and then we proceeded to walk up the stairs countless times. He also came over and ate dinner with us the first day we did our make up tests (lamb and salmon yum!) and we talked about wine and all sorts of stuff. He is totally down to earth, so nice and very similar to his character.

MH: Hopefully you mean similar to Cooper and not Mr C! Did you know before shooting it wasn’t necessarily the character of Dale or did you learn later?

AM: I knew based on the fact that I had seen the show so many times but it was never really stated anywhere. It was pretty obvious though with the long hair, contact lenses and everything.

MH: Was the exterior shooting of this Convenience Store scene filmed in the same location as Part 8?

AM: Yep, shot the scene with me and Kyle directly before the other scene. It was like midnight for the scene with Kyle and then we didn’t finish up until 2am or so for everything. It was a very long day…then the two of us came back the next day/night to film at the motel where we walk ‘Mr C’ toward the door where the giant David Bowie impersonating steam kettle, Phillip Jeffries, lives.

MH: The Woodsman are one of the most mysterious aspects of The Return, do you have any inside information or personal thoughts on them that might shed some new light for fans?

AM: Honestly, they didn’t tell us a thing. There are a lot of theories online though and Mark Frosts book has some interesting things as well. I love the idea that the store is the Flying Dutchman and never stays in one spot though.

MH: I’m a fan of that thought too, that’s why I asked if they were filmed in the same location. Do you have any favourite on set memories?

AM: Hanging out with David’s son actually! He was super helpful, hung out, brought us food & drink and talked about death metal bands with us. I didn’t even know he was David’s son until we were almost done. I also liked hanging out with the actor from the motel scene [Malachy Sreenan — Bosomy Woman] and hearing him practice his backwards lines before he had to go out and do them…kind of surreal.

MH: What has the reaction been like to appearing on the show and how does it feel becoming part of the Twin Peaks family, especially given you’ve been a lifelong fan?

AM: It’s been crazy!! I’m only in the show for a minute but it’s been super awesome. I’ve become friends with a lot of the cast on Facebook and look forward to meeting a lot of them in person at the TP festival. I’ve just met Kimmy Robertson and Harry Goaz again (they were on set during our make up test) at Crypticon in Seattle and I participated in a TP panel with them. We also appeared at a TP art show at Push/Pull in Ballard that they do every year.

MH: This has been your only TV role so far, what’s next for you? Can we look forward to seeing you in anything else?

AM: I’m in a band called Shaolin Hunks and that’s what I spend most of my time on. A lot of the Woodsmen are musicians actually…Christian Calloway and Stewart Strauss (some of the Californian Woodsmen) are as well and one of the Seattle Woodsmen, Liam, sings in a band called Toe Cutter. Acting gigs are limited up here in Seattle but if anyone needs a guy with a big beard, I’m down for anything. Not really actively pursuing it, plus how do you top being in your favourite TV show?

MH: Maybe you’ll get to reprise the role if we get a Season 4. Thank you so much for taking the time to speak with me, it’s been a pleasure, do you have any parting words for our readers?

AM: I applied to a completely random thing on the internet and ended up being cast in my favourite TV show. I had talked myself out of doing it three or four times before I clicked send due to lack of experience and being scared, but eventually I decided just to do it. It turned out to be the most coolest experience of my life, so far. If you wanna do something, do it!!