Laura Palmer’s tragic tale began onscreen with the discovery of her body, lifeless and blue, washed ashore nude and wrapped in plastic. In a lesser show than Twin Peaks, the deceased catalyst for the series narrative would have never become such a fully formed character. She was dead after all. In another show, the characters would have mourned for an episode or two and the memory of the deceased would’ve faded into other storyline developments. We would have never got to know the deceased character. In Twin Peaks, Laura Palmer was always the emotional core of the show.  The series never lost sight of the fact that her story was what brought everything together. The fact that we never stopped learning about who Laura was and what happened to her throughout her life made every development in her murder investigation that much more emotionally charged. As an audience, it wasn’t solely about solving a mystery—it was about justice and closure for Laura Palmer.

In between the first and second seasons of the original series, The Secret Diary of Laura Palmer was the first Twin Peaks book released. Written by 22 year old Jennifer Lynch (daughter of David) the book starts with Laura’s 12th birthday and runs up until her final days. The book was designed to keep fans engaged during the show’s hiatus and to give fans more insight into Laura’s life and also to drop some major clues as to who was responsible for her demise. Personally, I read the book after watching the series, but for someone who read the book when it was released, I would imagine that the book is pretty jaw-dropping in terms of its advancement of the role BOB played in Laura’s life for many years.

What makes The Secret Diary of Laura Palmer such a truly heartbreaking read is getting to go along for the horrific ride with Laura as she starts as a normal 12 year old girl and then ultimately seeing where she ends up before her death. In the early parts of the book we journey with Laura as she receives a horse for her birthday, which she instantly falls in love with in a very innocent, childlike manner. We continue to experience normal childhood events with her such as feelings about boys, her first period and her first kiss. We get to know the real Laura, the innocent child who is living a normal pre-teen existence and all the while is being stalked, tormented and eventually abused by BOB.

Laura’s next few years are documented in the book as she makes her best attempts to lead a normal teenage existence but the emotional, physical, mental and sexual abuse she endures at the hands of BOB lead her down the path that the series touches upon in the first season. Here in this book, it’s graphic and in our face. No punches are pulled as Laura attempts to cope with drugs and alcohol and her behavior gets more and more dangerous. There are times in the book where you see the inner struggle that Laura doesn’t want to be what she’s become. Where she longs for a different life, a life without BOB. The pain is too much to endure and Laura always ultimately tries to ease her pain by whatever means necessary.  Characters from the series such as Bobby, Donna, Ben and Leo all have fairly sizable roles in the book and definitely add depth to their onscreen characters, particularly in the case of Bobby. This book actually made me think of Bobby in a much more sympathetic light. A lot of the pain that Laura experienced, she took out on Bobby. The dark and dangerous roads he would find himself on were all as a result of loving her from a young age. A lot of Bobby’s actions and lines from the series have a lot more of an emotional punch when this book is taken into consideration (Laura’s funeral comes to mind). It really speaks volumes to how well thought out the first season of the show and this book were.

The character of Laura Palmer would later have a feature film to really shine a light on her pain and suffering but long before that, The Secret Diary of Laura Palmer showed us the truly tragic tale of a young girl being molested by her father / BOB and how the rest of her life played out as a result of that abuse. Laura Palmer was so much more than a corpse wrapped in plastic. She was the emotional center of this entire story and The Secret Diary of Laura Palmer not only helped bring her to life, but it also played a crucial role in the discovery of her killer in the second season of the show. This book is a must own for any fan of the show. This is a prime example of what makes Twin Peaks such a compelling and heart-wrenching story.

More From: The Secret Diary of Laura Palmer 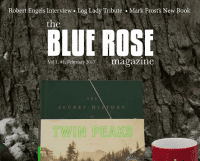