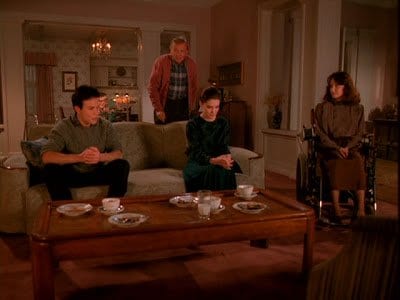 I’m wearing a long blue dress, a silk cotton mix, that buttons down the front. It has shoulder pads. My hair is curly and falls past my ears. I sit in a wheelchair, hands folded in my lap. My eyes are wide and blue. People trust me even though they shouldn’t.

It always surprises me when I think about how good a liar you are, Mrs. Hayward. I mean, Laura lied and Donna lied, and everyone in Twin Peaks lies. Everyone everywhere lies. But finding out your secret, and how well you managed to contain it for all those years, was earth-shattering in a way that even all of Laura’s secrets weren’t. She didn’t have your 19 years in which to cultivate her secrets. In the mathematics of secrecy, that means you win, Mrs. Hayward. Not that this is a competition. But secrets provoke strange behaviors, don’t they?

James Hurley told your daughter Donna how much he hated secrets and how secrets tear people apart, even as he was keeping secrets from her and would continue to do so. In Sense8, Wolfgang’s mother tells him that secrets are what keep a family together, especially when dealing with an abusive and violent member like Wolfie’s dad.

Secrets are cleaving. It depends on the context whether it’s bringing together or breaking apart. But sometimes secrets work either way, even with more context. Sometimes secrets mean both at the same time.

It’s only been in recent years I forced myself to face an uncomfortable truth about myself: I keep secrets just as good as you and Laura, Mrs Hayward. And the only reason I realized it at all is because I finally began talking about them — first to my husband, and then quietly to my closest friends. Unburdening myself of grotesque family secrets made me realize that as much as I pride myself on my honesty and openness, I am far more complicated than that. And so many people who think they know me and know me well, don’t at all. I’m a much better actor than I ever gave myself credit for. This is a harsh light to see myself under. It’s not flattering, but at least it’s honest.

These secrets had poisoned my ability to truly trust anyone until my husband came along and steered me out of that muck. Is that why you had no friends in Twin Peaks, Mrs Hayward? Was the weight of your secrets too much for the casual intimacy of even basic friendships? Was it so much work to maintain your secrets for your daughter’s sake, you had no energy left for pretenses with others?

In The Secret History of Twin Peaks the Archivist relays this conversation:

“A secret’s only a secret as long as you keep it. Once you tell someone it loses all its power — for good or ill — like that, it’s just another piece of information.”

But that’s not entirely how certain secrets work. At least not ours, Mrs. Hayward. Ours are the secrets with the power to change lives, destroy them even, with just whispers of a few damaging and choice words. Ours are also the secrets that destroy us from the inside out every day we don’t confess them.

Is this why you and your family are no longer in Twin Peaks? Did it all become too much? I always figured a new start somewhere else would be the way to go after all your secrets saw the light of day. I would love some news from you, and Donna, and Doc. Even Harriet. I’ve always had a particular fondness for your family. I wonder if the secret of your secrets is why. I can relate.

Yes, secrets may have a psychosocial function. Sometimes the function is protective, sometimes it is preventative. Secrets are a wonderful narrative trick in storytelling. They create such marvelous tension. But in neither cleaving case of secrets bringing people together or tearing apart is the function a healthy one. Secrets are lead in our plumbing, slowly poisoning our water. Secrets are asbestos in our psychic foundation that will give us soul cancer, the toxic chemicals of a tented home that destroy all forms of life.

James was right all along: The ultimate cleaving function of secrets is to pull people apart. Because no matter how hard we try, secrets always find their way into the light. We can’t begin to heal until they do. We can’t live authentic lives until our secrets are exposed. And that he knew this all along is why James has always been cool.