‘The Central Question of Twin Peaks’ is now available on Audio, written and read by John Bernardy, exclusively for our Patreon supporters. For just $3 a month you will have access to our full library of Audio content, plus three new uploads every week. To sign up visit our Patreon page: https://www.patreon.com/25YL

I think I’ve located the central question of Twin Peaks: when confronted with trauma, do you look away from it or do you shovel yourself out?

David Lynch and Mark Frost’s advice for when this happens? Strive for enlightenment.

Beneath the coffee and donuts and the quirky characters, the original center at the deepest heart of Twin Peaks has always been trauma, specifically that of Laura Palmer and her family. Trauma spread through the town over the course of the Pilot, and in Season 3 it’s asserted its place in the show’s DNA by being at the root of nearly every character we meet as we watch them make a choice: look away, or get the shovel.

Audrey Horne is stuck within a (Lodge-assisted?) delusion in her first appearances in Season 3. She finally makes it to the Roadhouse and she cracks through the foundations. She goes somewhere else, likely where her physical body actually is, and she finally sees what’s in front of her. She accepts her situation as it actually is and she’s ready to begin her healing. She no longer needs to be part of the story because her real work has begun.

Shelly and Becky share a phone call after Becky’s gunfight with the apartment door, and they decide to communicate in person over some comfort food made with love by Norma. They’ve decided to patch things up sensibly with each other rather than hold grudges. They are ready to begin their healing. Becky no longer needs to be part of the story because her real work has begun.

The mother whose child was hit by Richard Horne and his truck is grieving; crying like she doesn’t want to believe what has happened is true. Carl Rodd goes over to her, she seems to acknowledge that it’s true, and she’s no longer in the story. She’s accepted what is in front of her and she is ready to begin her healing. She no longer needs to be part of the story because her real work has begun.

This pattern is everywhere in Season 3, in various forms and scale, but almost every character deals with a variation of this struggle within themselves. Over and over, we see characters in the show realize the sh*t they’re in, and their last scenes involve them seeing it truly for the first time. The happy endings to be found are not usually that the characters have shoveled themselves out of the sh*t (after all, not everyone’s as far along as Jacoby and Nadine), it’s that they realize they need to. 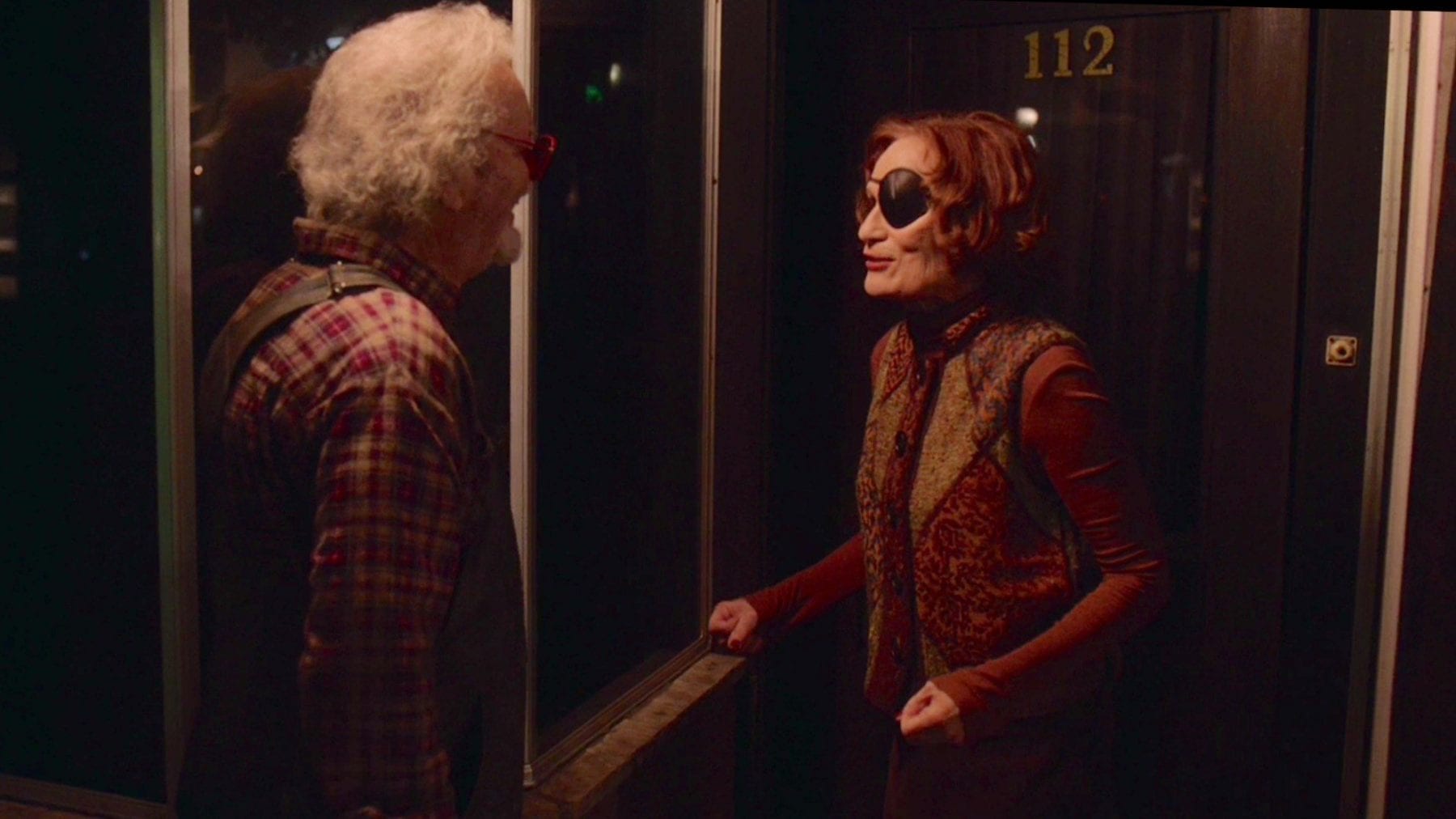 The enlightenment I think Lynch and Frost suggest we strive for is the acceptance of our true situation. Most of the characters we see are at some level delusional, are putting veils over their situations, or are blaming others for the mess they’re in. They go about their situations feeling trapped or not even noticing that they’re stuck in a repeating pattern. But the true problem is not taking the accountability for being able to leave the situation. It’s not about assigning blame for how you came to be where you are. It’s about the power to move forward. It’s about looking through your darkness until you see the truth and then moving through it into your future.

Either you accept that you have power to change your situation, or you continue to remain powerless because you don’t grab the power available to you. Or, if you’re really in the sh*t without a shovel and it’s overwhelming you, if you’re so in it you can’t help but suffer from PTSD, and no one can get a golden shovel to you in time, the BOBs and Judies of the world will take the power from you and they’ll devour you from the inside out. Like Sarah, and like Leland.

Lawrence Jacoby was supposed to be the punchline of a joke. All those shovels were going to do something, maybe be used for a groundbreaking ceremony, or somehow correcting the metaphysical ills of the town, right? No, it’s all for some dumb infomercial that was hysterical the first time but then got replayed over and over. And over. Jacoby’s just some hotheaded quack, right? Not so much. I think we were right the first time. And he has to broadcast his message over and over because all the characters are stuck in their loops and they’re having trouble listening to the true message.

It takes a long time for a message like Jacoby’s to sink in. It takes about as long as it was presented to us in the show. First the shovels need to arrive (and it takes a while to get there just like the delivery of the crate in the first worldly scene of Part 1). And then you have to spend the time, put the care into it, to prepare the shovels. To make sure every inch of them are covered in gold. And once they’re covered, then and only then do you hear the problem announce itself, and after that it takes a few times before you can see the deeper problem at the center of it all. And only when you can name it can you declare war on the trauma within yourself. Only then can you look at it, size it up, and say “I can shovel myself out of that.” 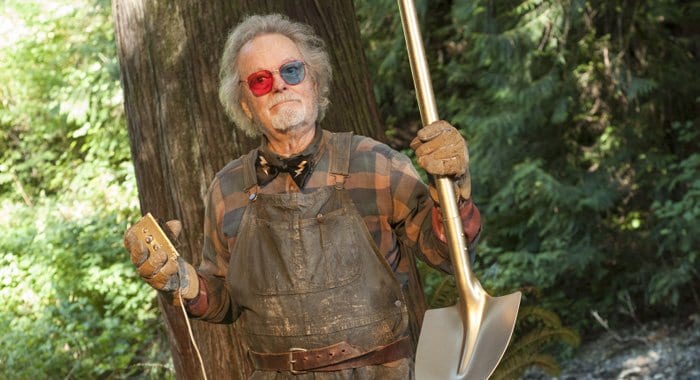 And only in infomercials can you shovel yourself out of the sh*t that fast. All of that kind of shoveling happened off camera in the Dr. Amp ad, and it’ll happen off camera with all the Twin Peaks characters. It’ll happen off camera for us too once we are able to be honest with ourselves about the traumas we need to exorcise in our own lives.

Laura Palmer, in her Part 18 life as Carrie, lived as a waitress doing the same thing over and over just like Shelly because she buried the trauma from the early years of her life in a metaphorical vault. She didn’t know her name anymore, didn’t know her parents. She was literally lost. But she became more and more proactive until she could hear the memory of her mother calling to her on the morning she died. She screams because she felt her past again. After a long, long time of burying it, she again accepts her past happened. Her past, her trauma, becomes real to her once again and it roars to life with her scream. She’s accepted her past as real, and this acceptance is so powerful that the electricity is taken out around her. She’s ready to begin her healing. She no longer needs to be part of the story because her real work has begun.

And Dale, being whispered to yet again in the end, realizes he’s lost decades of his life thanks to his time in the Lodge. He begins to understand that not only will he never get those years back, he has to do it again. But this time he seems to know something different. Maybe he realizes this time that he’s done this before. Because it was a strong enough experience this time that it was set in film. We too have seen it happen over the course of Season 3. Dale wasn’t sure if it was repeating the first few times we saw Phillip Gerard asking him if it’s the “future or is it past,” but at the end of the story maybe he realizes Phillip wasn’t offering him a riddle but a choice. Maybe now he knows he’s gone back to the past, and maybe this time he also sees his future through the darkness and will walk through that darkness with the firelight of understanding. The story’s over, after all. There’s nothing left but the work.