“He’ll Remember The Unofficial Version” is now available on Audio, read by the author, John Bernardy, exclusively for our Patreon supporters. For just $3 a month you will have access to our full library of Audio content, plus three new uploads every week. To sign up visit our Patreon page: https://www.patreon.com/25YL

And that’s great. That clears everything right up. 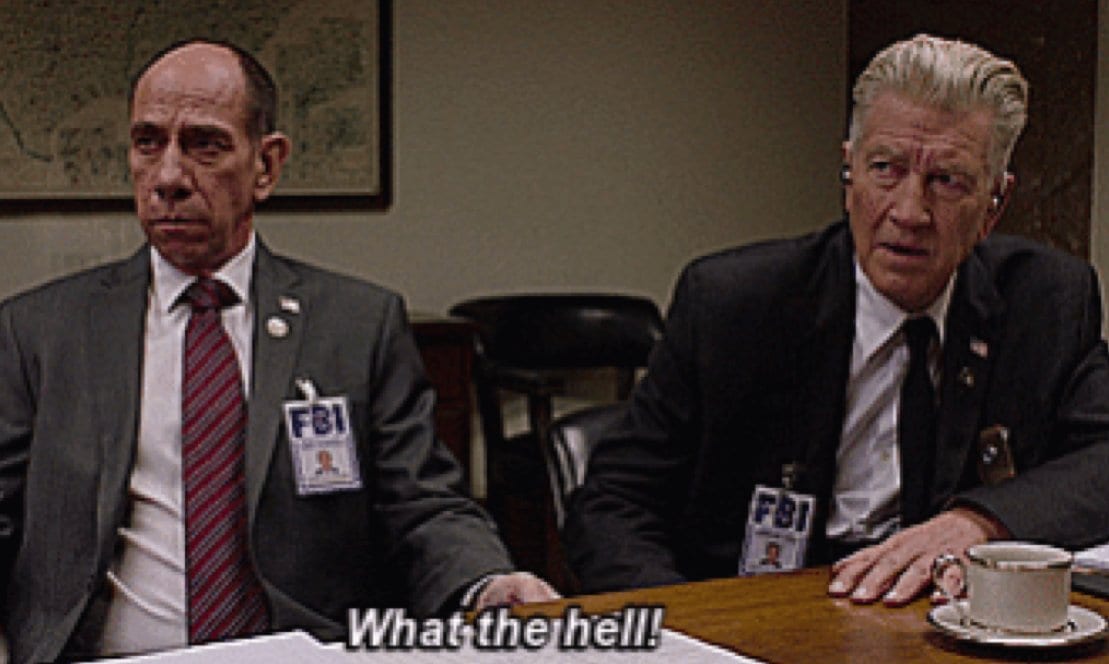 But sarcasm aside, it can mean a number of plausible things, one of which I explained as a section of my previous column’s memory theory: in a nutshell, I think this mentioned “unofficial version” is a Lodge-adjacent “memory” entailing the quest to find Judy that Cole shared with Tammy and Albert in the beginning of Part 17. An actual retcon both for the viewers as well as within the narrative. I suggested this “unofficial version” was created by the rippling aftershock through physical reality when Cooper removed Laura from the Fire Walk With Me flashback sequence in Part 17 that he reached by way of the Owl Cave Ring symbol (that to me therefore ties it to Lodge-adjacent space and therefore a non-physical reality). I’m going to ask you here to assume these broad strokes are a plausible foundation, but if you’re curious how I arrived at these conclusions I encourage you to read my last column. Here, I will only be expanding on Gordon’s role, why Gordon was specifically chosen to deliver this false message, and how it happened in the first place.

As Cooper, his doppelgänger, and BOB needed to be focused on the quest to find Judy (I’m guessing for the greater good of removing BOB from his host), Jeffries needed a man on the ground he knew he could trust, someone who also has close history and proximity to Cooper. Jeffries’ original Blue Rose Task Force partner Gordon Cole fills both of these needs.

Gordon also understands the otherworldly Lodge-adjacent vocabulary well enough that he knows what he’s looking at when confronted with a vortex portal, or a woodsman.

Jeffries could have chosen Albert for these same exact qualifiers but, unlike Albert, Cole has enough clout to get an audience with agent Bryson. Gordon is the most informed, highest ranking agent available. 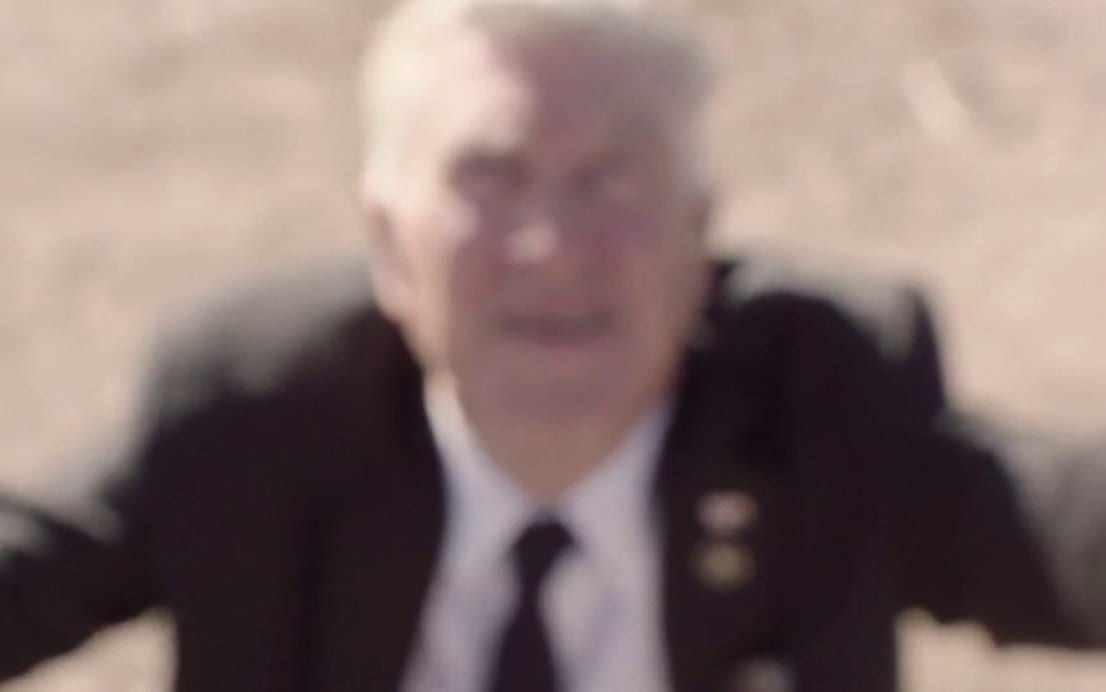 Cole has a propensity to free-draw, such as the antlered creature with the arm reaching toward it, signifying he’s already attuned to other frequencies.

He’s also attuned to his dreams, as we see with the Monica Bellucci dream he later recounts to Albert and Tammy.

Whether that’s natural to Cole or not is up for grabs though, as he is constantly hearing the world at different frequencies. Because of his hearing aid.

The hearing aid changes how sound and frequency resonates on Cole’s eardrums, literally returning Cole’s ears in order to hear. More importantly, the hearing aid is electric. Cole’s literally got an electricity source pointing right into his head influencing what he hears. He’s wearing a conduit of Lodge transportation, and as we see in Part 3, what is transported along the electricity is sometimes as physically real as CooperDougie himself. So comparatively, absorbing a memory of an “unofficial version” through the hearing aid seems perfectly plausible.

It makes sense how Cole would receive an aftershock through his hearing aid that would allow him to attune with this new veil over reality moreso than the physical world he lives in. And also how Albert would have no similar recollections despite working closely with Cole over the years. 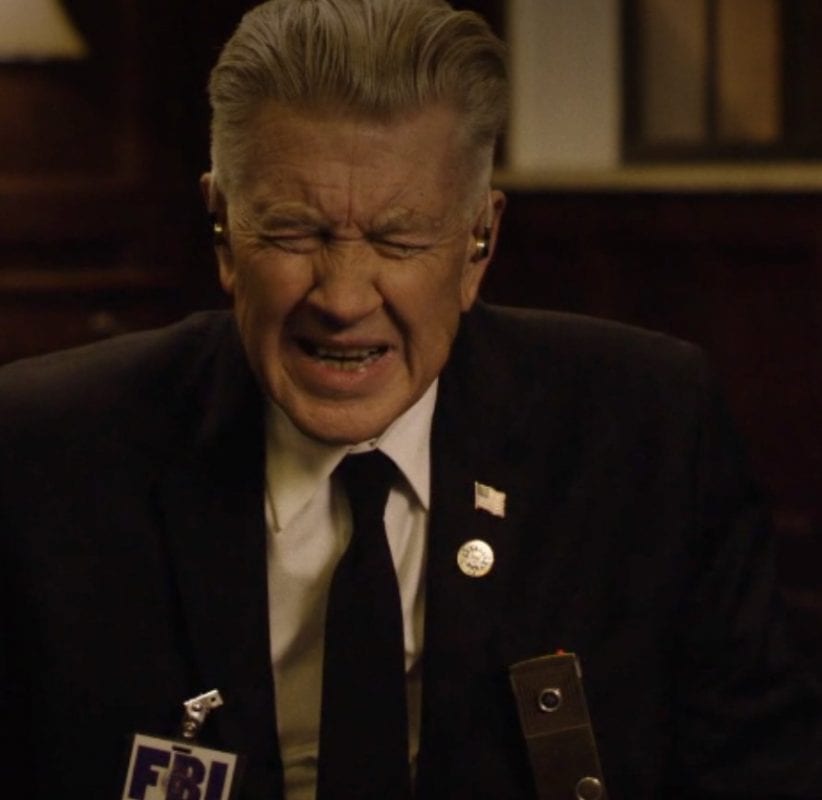 How do we see the “unofficial version” arrive in the story?

When Cooper went back in time to remove Laura from the FWWM flashback, I think shockwaves of this event, this rewritten memory, veiled physical reality in a wave both forward from 1989 and backward from Cooper’s moment of time travelling. And the wave rode through Buckhorn in the form of the Laura Fire Walk With Me vision that knocks on Cole’s door right before Albert arrives with information on tulpa Diane’s duplicity. This was a moment of change in the perception of reality. This is the arrival of the “unofficial version.”

The reenforcement of this alternate chain of events is from Cole’s Monica Bellucci dream where he remembers the Phillip Jeffries scene from Fire Walk With Me. Gordon’s explanation of this out loud to his fellow agents reminds Albert of this dreamlike event he also experienced, and thus Albert’s memory is now tuned to the possibility of the “unofficial version.”

And the final straw that tuned our agents to this version of memory is Gordon Cole’s retcon explanation of Jow Day in Part 17. From there they were hook line and sinker under the veil. 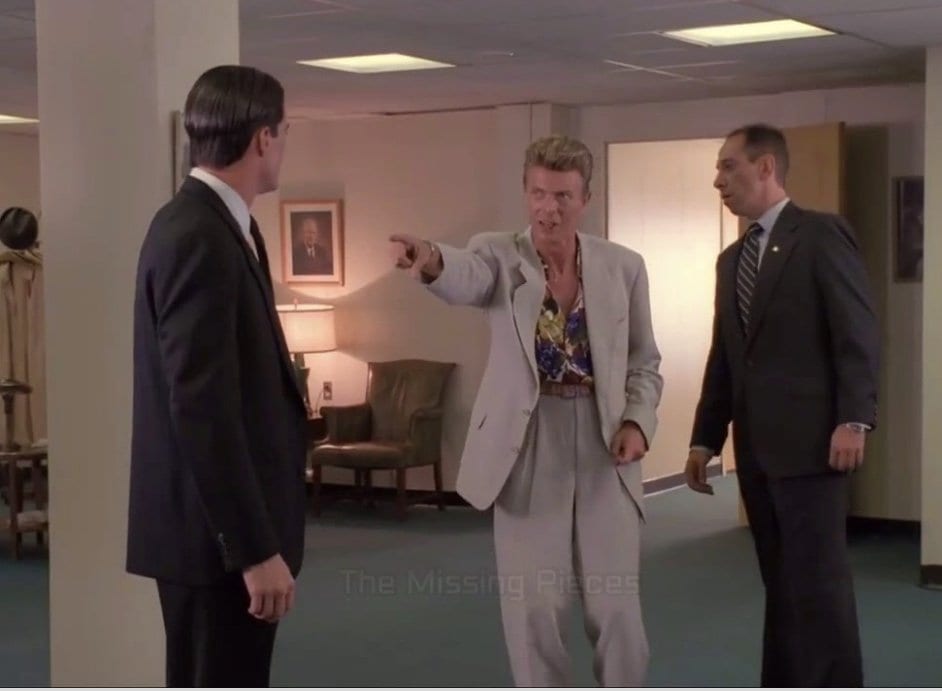 Why is the “unofficial version” an incorrect memory?

Why do I think the Part 17 Jow Day retcon was a retcon within the story itself?

I’d normally say the Bellucci dream and the Laura vision from Buckhorn was Gordon’s trigger to remember his Judy plan from Briggs and Cooper, a trigger like “:-) ALL” was for Diane or “Listen to the sounds” was likely used wake Cooper, but because Jeffries said Gordon would remember the “unofficial version,” we are thus seeing Gordon triggered to remember a new set of memories.

It’s the same Lodge-veiled memory setup that clouds everything in Twin Peaks in The Final Dossier when Tamara Preston questions residents about Laura Palmer being a missing person rather than murder victim. She gets silence from people, followed by a cloudy “yeah that sounds right.” As they retune their memories.

And in this case, the “unofficial version” is false-but-similar events to FWWM, a lodge-adjacent memory of the actual events of the end of Laura Palmer’s life rather than the events themselves. And now Cole is attuned to it and so are the other agents. 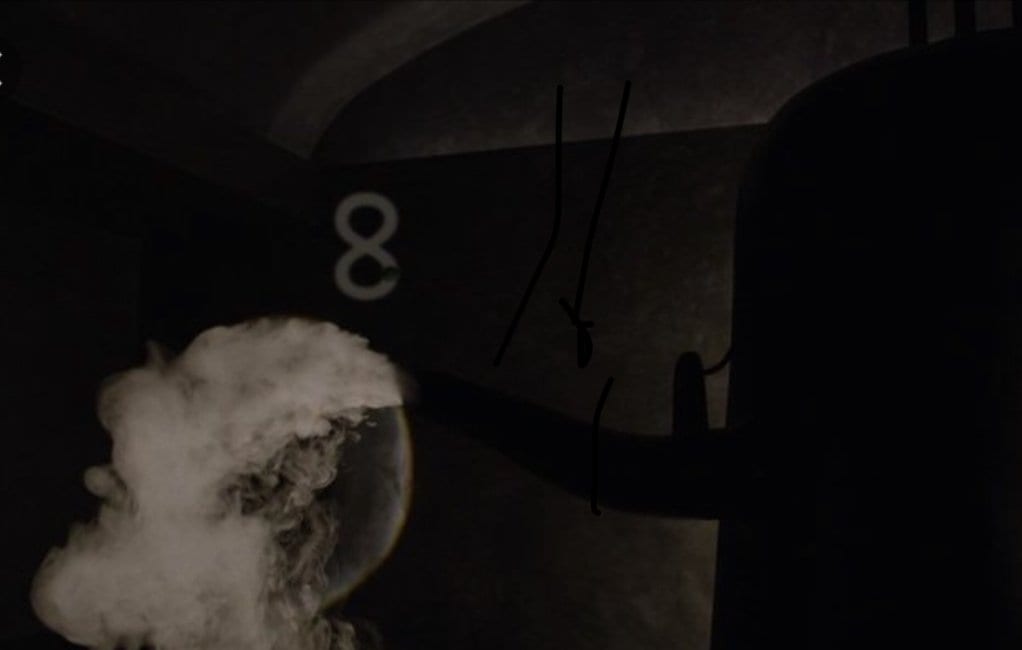 What is the end game here?

Why is this incorrect memory sequence necessary to the flow of events?

Because Gordon needs to be present when Cooper goes to the boiler room. Cole’s adjusted memories provide the proper tuning to get to Jeffries, much like having soil in your pocket returns you to Jack Rabbit’s Palace. Having an improperly tuned Gordon gets Cooper to where he needs to go, as if the “unofficial version” is important to “remember” as Cooper goes through the entrance. As if Gordon’s memory needed to be in Cooper’s mind as he goes through the portal.

And therefore Cooper goes to the exact place where he makes the choice to inadvertently create the “unofficial version.”

Jeffries seems to need Cooper to create this Lodge loop, and I’d wager it’s in order to arrange the events that separate BOB from Cooper. Maybe this is the only way it can happen. I’ve speculated on this elsewhere, and have gone on to explore how removing BOB from Cooper eventually leads to balance and evolutions, but as far as Gordon is concerned? His true purpose is merely to bring Cooper to this point in the boiler room. 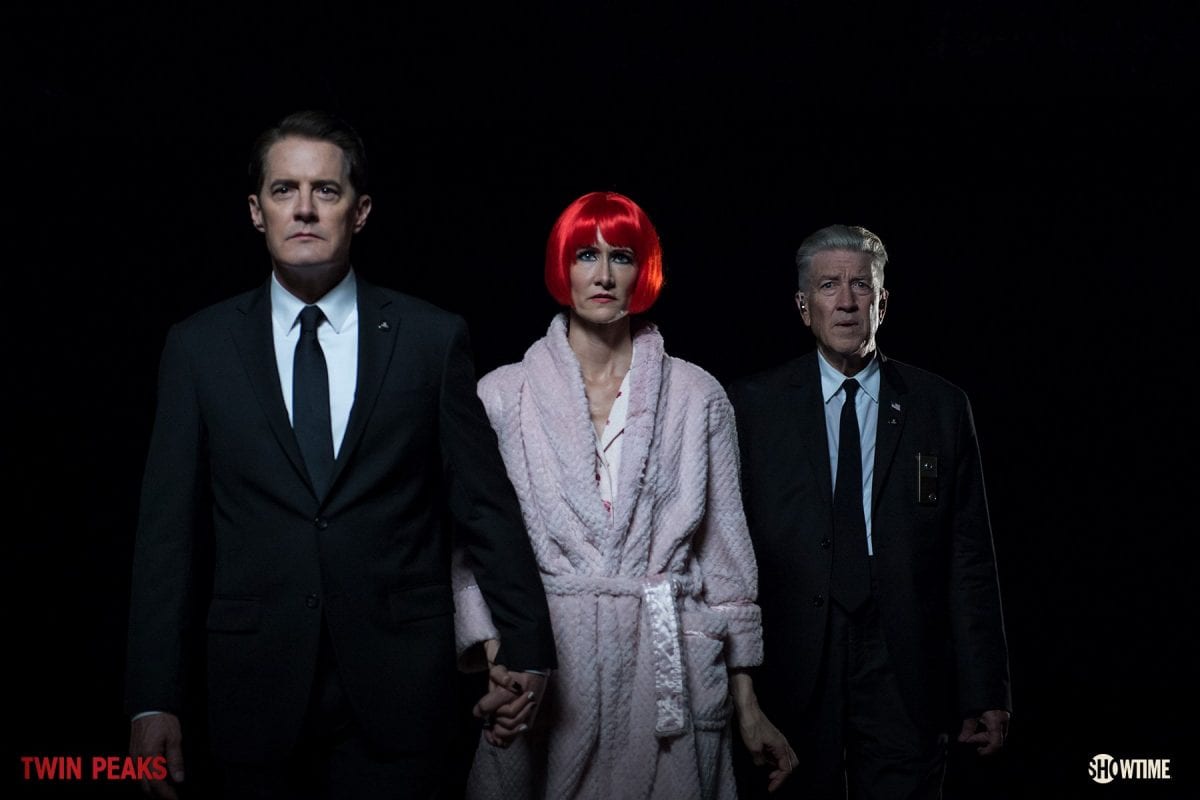 How do we know? Because we never see Gordon again after that moment.

He brought Dale to the point where Cooper is meant to make a choice. He doesn’t make the choice for Cooper, he merely gets Cooper to that point in time and space for the choice to be made. Cole is a facilitator only.

This is similar to how Cooper is meant to facilitate bringing Carrie back to the Palmer house, but it’s up to Carrie to make the choice of which version of traumatic events she wants to remember or look away from.

Whether it’s Gordon or Cooper being the facilitator, I wonder if the message is actually a simple one: to get to a turning point in your life, a helping hand can get you there.

It’s either that, or, if you’re presented with a turning point in your life when even the person helping you get there is in the dark about the official story, do you choose to stay in that darkness and look away, or do you choose to do the hard work and push through to recognize the truth, where you can see an inkling of light?

Next Week: more reality alterations with the Owl Ring