‘“Is It Future, Or Is It Past?”: Pinning The Final Season 3 Scenes To Time’ is now available on Audio, written and read by John Bernardy, exclusively for our Patreon supporters. For just $3 a month you will have access to our full library of Audio content, plus three new uploads every week. To sign up visit our Patreon page: https://www.patreon.com/25YL

This time around, I’m looking at signs of Past and Future in the final RichardCooper and Carrie scenes of Season 3. I touched on it right at the end of my memory theory column where I suggested an angle for it being the future, which I’ll expand on after making a case for placing it in the past.

Now that there’s some room to stretch out and put a proper think on, I’ll say this: there are compelling arguments for both options, and I don’t think there is truly a correct answer to “what year is this?.” Per standard Twin Peaks operating procedure, there are countless data points with minimal connective tissue between them, and therefore we are left with Conjecture as a necessary tool. Which means there’s always room for error no matter how airtight our explanations feel to ourselves.

But that’s not to say we’re supposed to give up. Twin Peaks is a participatory narrative and we are still meant to explore the questions, hence what I do here in Electricity Nexus: sit between the proverbial mountains and document the energy heading in and out of the portal. Even though answers rarely reach completion, the exploration always yields growth.

Anyway, onto the exploration at hand.

Dale went into the Lodge in 1989. If Gerard’s been asking him if it’s future or past, it’s implied that a time period before 1989 could be a possible option for Dale’s exit point.

It’s hard to base the year on architecture, fashion, or Cooper’s car, other than it’s at least the late ’70s. Though the rotary phone in Cooper’s Odessa hotel room implies it’s no later than the early ’90’s when I believe most places (including grandparents’ houses) discontinued them for good.

The Double R, based on Hank Jennings’ nighttime fight with Cousin Jonathon, used to be closed at night. It also didn’t have a RR-2-Go banner on its outer wall.

Per The Secret History of Twin Peaks, the Palmers didn’t move to Twin Peaks until the early ’80s. This could explain why “Alice Tremond” didn’t recognize the name Sarah Palmer. They might have yet to move to town.

Per Phillip Jeffries’ experiences in Fire Walk With Me, the first time he time-traveled he went two years into his future, which was the direction he was travelling in. It’s possible that Dale, having just travelled backward in time for the FWWM flashback scene, was propelled even further into the past based on the power of his own momentum.

Any or all of these details together can point to how Dale took Carrie into the past even earlier than 1989. 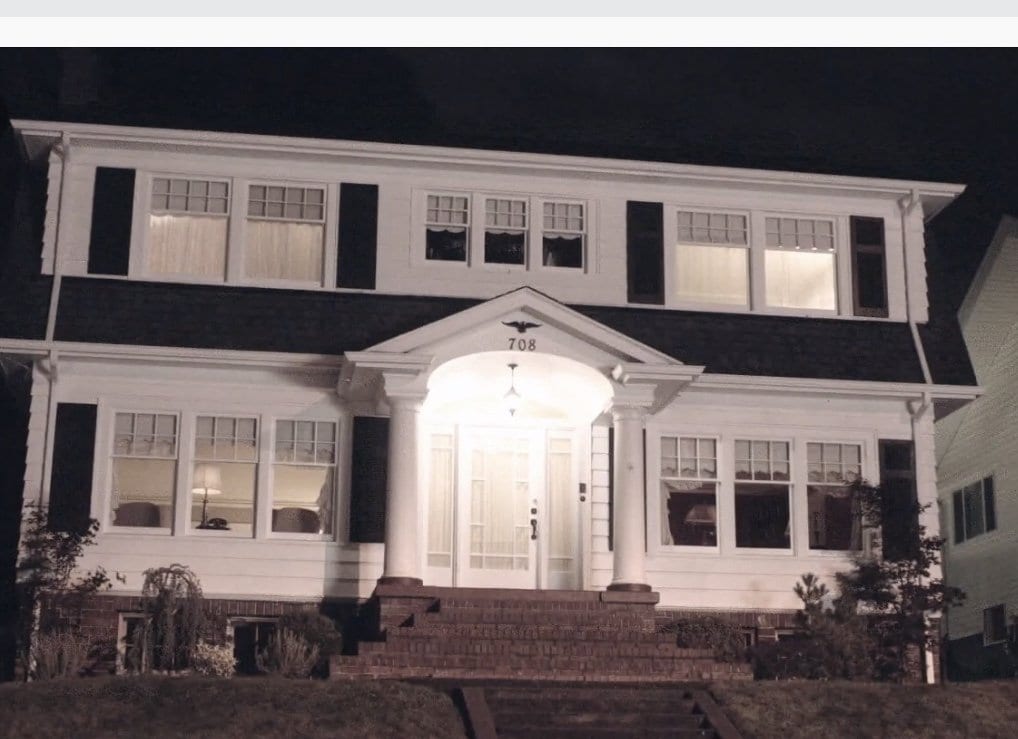 Diane and Dale looking closer to their current age than their age around 1989 is almost proof enough it’s the relative future to the moment Dale entered the Lodge.

And what’s the price of gas got to do with the price of gas? Just current day prices in plain view, and therefore the implication it’s at least 25 years in the future relative to 1989.

Once Norma sold the franchise to Walter and removed her Double R from its rules, she could have easily (or even been forced to) removed the RR-2-Go banner on the side of the diner, and even gone back to only daytime hours of operation in the interim. Or depending how far in the future we go, the diner could even be under new management and rules.

The Tremonds, as a Lodge-associated last name, could be veiled over the Palmer House for this meeting with Cooper and Carrie at any time, but it’s also possible they’re the real owners of the house after all, two homeowners after Sarah leaves it.

Specifically, this could mean we are further into the future well beyond the year we saw Dale leave the lodge in Season 3 (25 years after 1989 or thereabouts). Beyond even what we can predict.

In my mind, Major Briggs’ journey through time implies the most for Cooper. Briggs’ 16 fingerprint hits over 25 years while remaining the same age implies Briggs skipped like a rock across time and only blinked in and out temporarily before moving forward yet again.

In my memory theory, I wrote how the Part 18 sex scene (specifically I read it as Diane’s confronting of her trauma in the hotel room) may have been a catalyst to put Cooper into a hibernation and the scene of Dale’s waking up to the note from Linda to Richard could be the equivalent of a hit of fingerprints on Cooper’s own journey ahead in time. He may not even know that he’s skipping, just like how Jeffries didn’t know what was happening the first time he lost two years of awareness.

Could Cooper, having seen Lodge Laura 25 years later, be seeing her again as Carrie in another 25 years? Meaning 25 years from now? Cooper may be so far ahead in time in these final scenes with Carrie that the town of Twin Peaks has no recognizable residents left.

It’s possible that’s how long it took for the town of Twin Peaks to heal enough for Carrie to end her Laura trauma in the final scene, and it’s more than possible that, much like Major Briggs, Cooper is now blinking into the time-stream to enact plans that come from the Fireman’s realm.

On Cooper’s path to becoming a floating head, he may be a Bodhisattva for people, as J.C. Hotchkiss has explained much more eloquently than I can, in a way extremely reminiscent of Dr. Sam Beckett on Quantum Leap.

And much as Jeffries was in a perpetual in-between state, it seems Cooper is entering into this sort of role himself, which takes the question of “what year is this?” in to a certain level of irrelevance.

Is there a third option?

Much as there is units of three (think Pink Girls or Detectives Fusco) recurring regularly in Season 3, I believe there’s another state besides Future and Past. Brien Allen points out in his article here that there is a third state now: a state of balance between the extremes of duality. And I believe in the case of time, we already know what the third answer is: they are in the Present. RichardCooper and Carrie Paige are in their present.

When they drove past the Double R, I couldn’t help but be reminded of Aaron Hussey’s comment on Facebook about there being purple light present. Where is it? All over the pavement. And Cooper drives the car right through it off-screen on the way to their destination. And how was that purple light made? From the blending of the blue and red neon lights lining the Double R above the window level. Blue and Red, much as Jacoby’s glasses are meant establish a state of balance, gives its wearer’s world view a purplish hue. And balance, in the case of this metaphor, means that perfect state between worrying about what will be and what’s already happened.

This seems to be what is supposed to matter. You spend too much time looking forwards or backwards and you miss experiencing where you are. It’s the same message as how people deal with trauma: do not live in your past or you can not achieve balance and therefore you’re stuck in place. Shoveling out of the sh*t, my personal favorite metaphor in the whole show, is a metaphor for overcoming the past (and not being paralyzed by fear of the future) and living in your present.

We can try to pinpoint specifically where RichardCooper and Carrie are in the narrative timeline, but that’d be kind of like saying the Part 17 battle between BOB and Freddie was the only ending that mattered. And we all know there was a whole extra Part beyond Part 17, even beyond the FWWM flashback. Regardless of year, Cooper and Carrie are in their present at the end. That much we can agree on.