*Spoiler alerts for Twin Peaks Season 3, and content warning for discussions of murder, grief, and PTSD.*

The date is July 1, 2017. 7:28 PM. I am wearing a calf-length pleated skirt, a fitted pink cardigan, and two-toned shoes with white bobby socks. My hair is dark, curly, and short in a halo around my head. My lipstick is fire engine red. I have a fetching birthmark an inch from my left eye. My eyebrows are divine.

Wanna hear something strange? I was in the grocery store the other day and noticed that I was snapping my fingers to a beat. When I paid attention I realized it wasn’t to the generic music playing in-store, it was to your theme. You know, the one you danced to in the Double R Diner? Gosh, I wonder how many other places I’ve been humming to myself and snapping my fingers to music only I can hear. Maybe some of the strange looks I’ve been getting are not because of my half-shaved head and tattoos, huh? The Twin Peaks effect is in full swing. Let’s rock, right?

Wanna hear something else a little spooky? Out of the blue a few months ago I started craving Nine Inch Nails. The last time I was really into them was in high school and college in the 90s, around the time that I first visited Twin Peaks. Over the years I’ve gravitated more towards Trent Reznor’s work on film soundtracks and scores, but suddenly I needed all those old NIN albums that helped me through so much back then. Since the turn of 2017, I’ve been listening to NIN on the regular for the first time in decades. It seriously tripped me out to see them headlining in The Roadhouse last week. So many goosebumps.

And the song Nine Inch Nails sang? When I looked up the lyrics, Sweet Christmas, Audrey. So many people complained that their performance was taking up precious time away from the story. First off, those people don’t seem to understand that these Brechtian interruptions ARE the story. And next up, the lyrics to “She’s Gone Away” are some of the darkest foreshadowing we’ve had in The Return yet. Up there with that red light swaying at the haunted intersection. The light socket from which Cooper emerged into Dougie Jones’s body. Coop and The Giant’s first conversation that we’ve learned took place outside time. 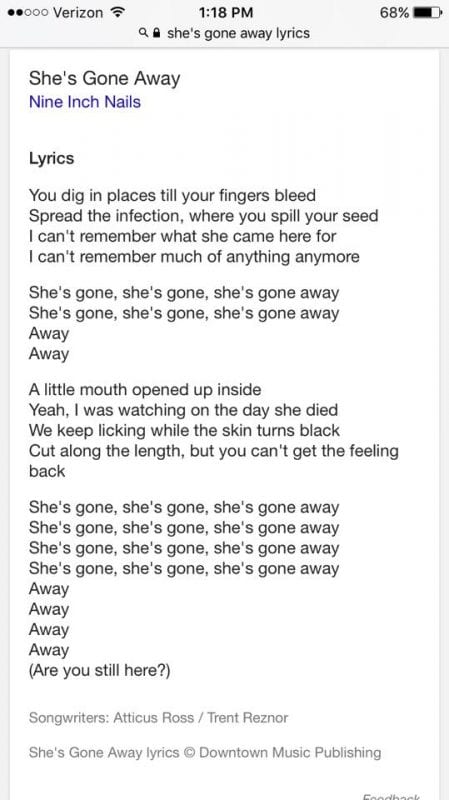 So spooky. Nothing is happening by accident, is it?

Wanna hear something that very few people know about me, Audrey? The day after I witnessed my friend Wendy’s murder I was supposed to go to a Hallowe’en party dressed as Laura Palmer. I had a long blonde wig, light blue eyeshadow for my lips, a flesh-colored slip with a huge velvet flame applique up the side, and several yards of plastic for a shawl. But my life had ruptured along with Wendy’s, and instead I was sitting in the police station waiting to give my witness statement to the detectives. Before they put me in an interrogation room I was placed at a someone’s desk. A handsome cop was assigned to keep me company. He was tall, blonde, and looked a bit like Christopher Reeve with that strong chin. He asked me how I drank my coffee and I told him, “Black as a moonless night, just like Dale Cooper.” Turned out the cop had watched Twin Peaks when it first aired and was still a huge fan. I told him I was supposed to go as Wrapped-In-Plastic Laura for a party, and I began to cry. It was the first time in hours I allowed myself to really feel the death I had just witnessed and the huge loss of our darling Wendybird. At that moment, it was only me and the police who knew of Wendy’s murder. And I could still smell the gunsmoke and her blood. Fear rolled out of me in palpable waves. I had never felt so alone in an entire lifetime of feeling alone. A new kind of shattered.

The handsome cop sat there with me as I wept until I had nothing left. At least for that early morning. I would soon come to know that my tears would be a boundless purple ocean that would often threaten to drown me. Grief is its own kind of Black Lodge, isn’t it? And death is a doorway. Even if it wasn’t your own death.

From that moment on October 28, 2000, weeping into a cup of black coffee in the West Hollywood Police Department, Twin Peaks inextricably bonded with the trauma of Wendy’s death. It’s remained that way ever since. And I’ve never had a cup of black coffee ever again. And the thought of doing a Laura Palmer cosplay made my stomach feel weird. And I’ve only celebrated my once-favorite holiday Hallowe’en a handful of times in these past 17 years.

In 2002 Moby was headlining a music festival in San Francisco. My obsession with Twin Peaks was now an underlying force in my life. Laura and Wendy, gone. Me still in the acute haze of grief and PTSD. I stood in the crowd, willing Moby to play his Laura’s Theme remix “Go”. When he did I started joy-screaming and ran away from all my friends. I wanted to get closer to the stage even though we were up in the grassy nosebleeds. I found a spot and danced my heart out, tears streaming down my face. It had only been two years since I witnessed Wendy’s murder. I couldn’t help but think of her beautiful soul, taken too soon. And Laura. Who hasn’t been haunted by Laura Palmer?

The song ended and I returned to my friends. I had no language to describe what Moby’s song meant to me, and what healing steps I’d just taken while dancing to it on my own. In that moment, frenzied and tearful and sweating out pain, I was fully aware of being alive and present in those five minutes of musical release. The next day, the sadness — that horrendous survivor’s guilt that I should have been the one wrapped in plastic, not Laura, not Wendy — kicked back in. It would be more than a decade before joy became a daily part of my life again.

And many of those moments in the interim would be me losing myself in music just like that night with Moby’s version of Laura’s Theme.

In October 2013 I finally did my Laura Palmer cosplay. A simple, close-up self-portrait of my face, eyes closed and those pale blue lips of death. I am dead, yet I live. It wasn’t exactly coming full circle, but it felt like a step in a positive, if a bit morbid, direction.

Twin Peaks has always relied on diegetic music —  music that comes from within the story and not the soundtrack/score — as well as its non-diegetic varieties for a number of creative narrative functions. Sometimes it’s to draw us in. Other times it’s to remind us just how outside the story we are. It’s one of the more remarkable things from the first and second seasons that always gets special notice.

The way music has been playing out in The Return is so different than before, but just as dreamy. Don’t you think? Maybe even more dreamy given the current contexts. There’s a new edge to it. I like the way it feels against my skin and near my heart, even though it’s often sharp and dark.

Having Nine Inch Nails back in my life without even knowing they would connect a dot to my favorite town does feel like a full circle. Or maybe a spiral that expands and contracts with important points of intersection. My emotional tectonics are shifting in unexpected ways, and music is a balm, a glue, a magic potion increasing my new awareness. I feel so grateful to be here and witness these wonders still unfolding. In many ways it’s making the pain of existing up to this point worth it. Now, with so many new reasons to live and live well.

And I wonder, Audrey: Do you still dance? 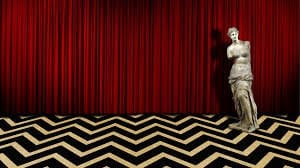